Thrillist named the West Baden Springs Hotel the most beautiful building in Indiana. And since I’ve lived in Indiana 40-some years, I’m qualified to say they’re 100 percent right!

What’s so great about a luxury hotel so tucked away in the rolling hills of rural southwest Indiana that it’s tough to get to?

It’s the dome, man. The dome is gigantic. 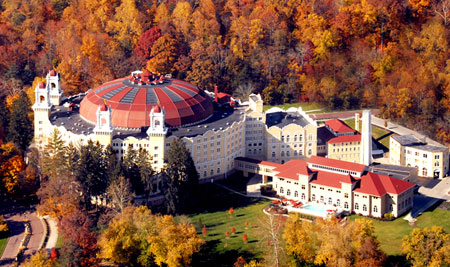 At 200 feet across, it was the largest free-spanning dome in the world from 1902 through 1913 and the largest in the United States until 1955. Some called it the eighth wonder of the world, and famous clientele from both coasts flocked to the little town of French Lick and adjacent West Baden to swim in the mineral springs. 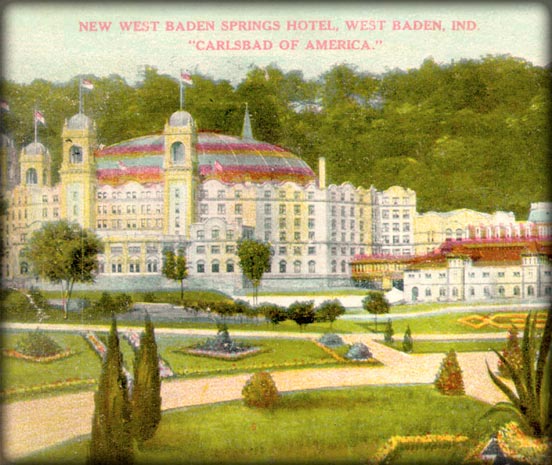 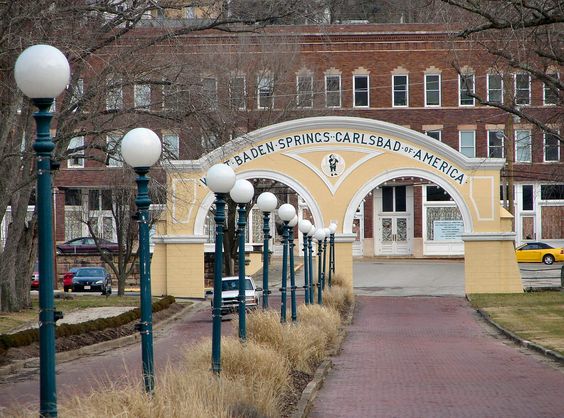 But the outside then, as now, is meh compared to what’s UNDER the dome… 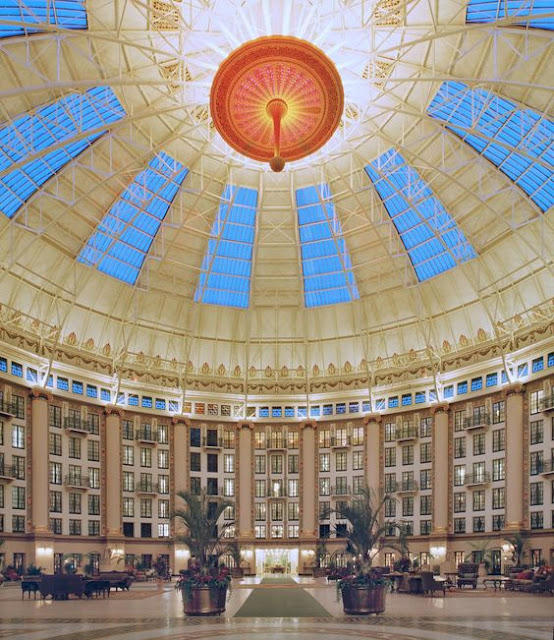 …Or whether its panels are open or closed… 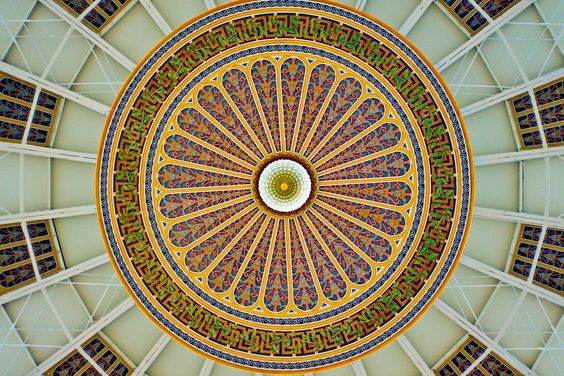 …Or whether the cavernous lobby is itself darkened to feature the lit dome at night. 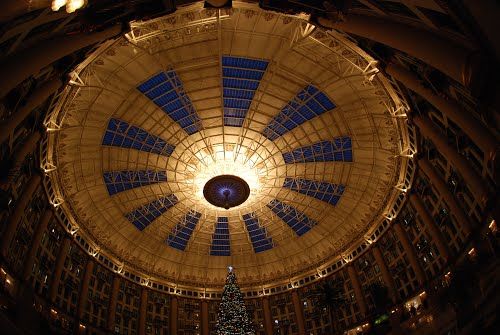 Guests may book rooms that open onto the dome and watch its changes from the comfort of their home away from home. (Or should I say their DOME away from home?) 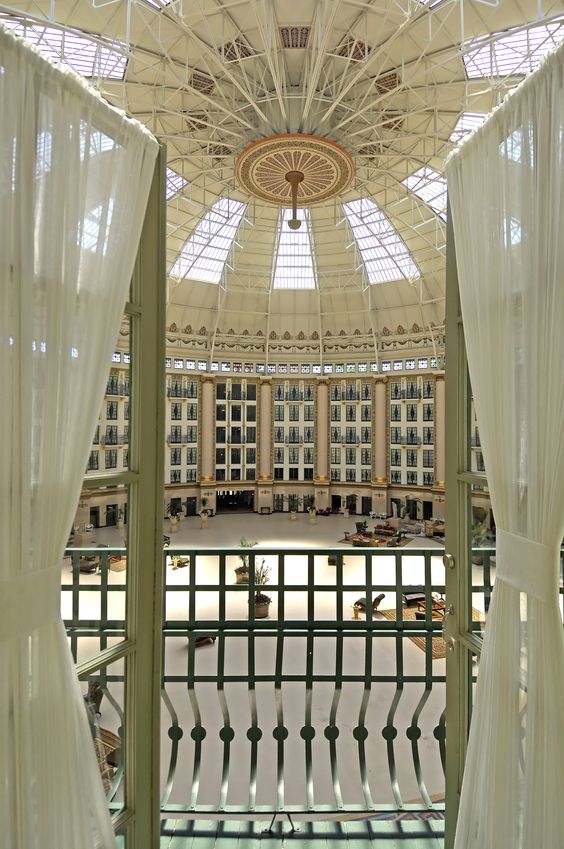 A balcony room and a long camera lens will get you even better close-ups of the dome’s exquisite detail.

While the view from on high is spectacular… …Part of the fun is relaxing on the many comfy sofas, chairs and chaise longue arranged in “sitting rooms” at ground level. 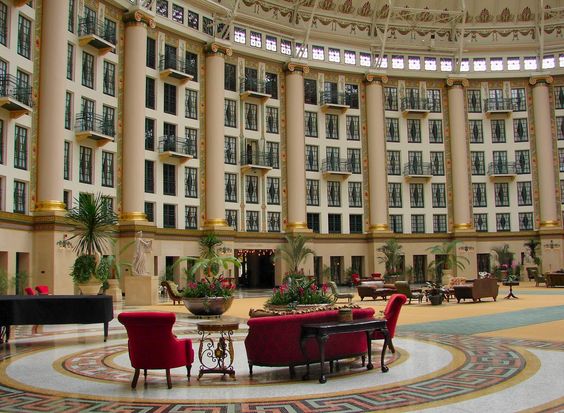 You’ll have your choice of seats, and it’s a great place to kick back and catch up on your reading. 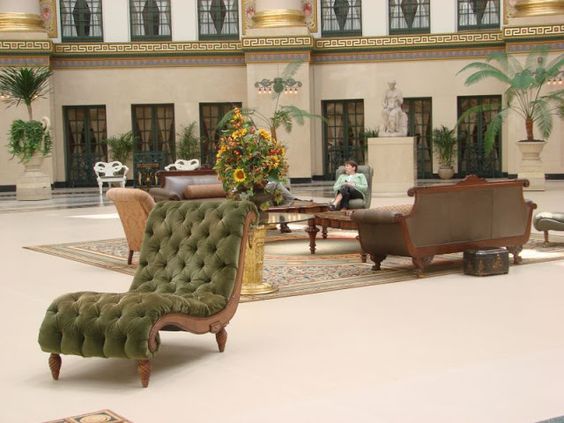 If you get thirsty or hungry, the hotel café and bar are just a few steps away. 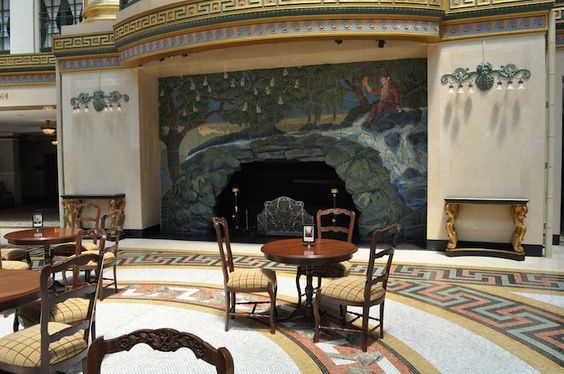 You’ll also want time to study the “Pompeiian garden” frescoes and mosaics that make their way around the base of the dome. 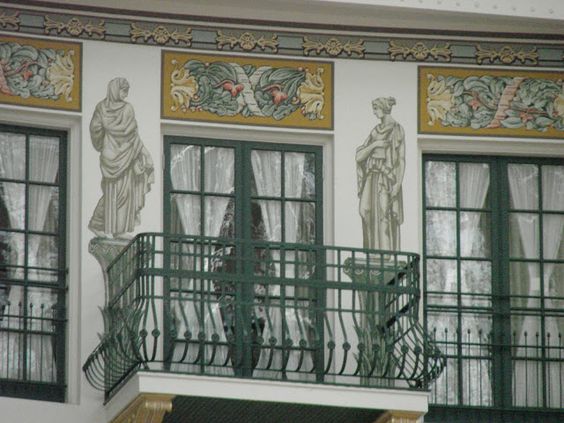 The columns, friezes and statues are pretty spectacular, too. 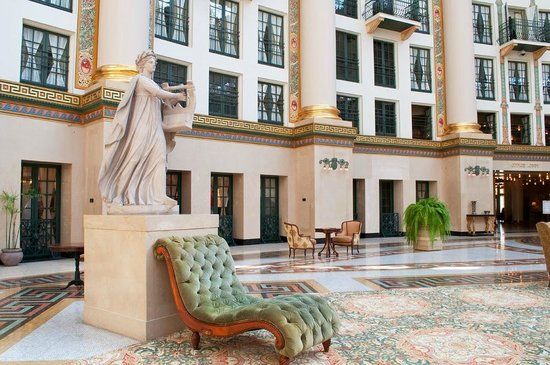 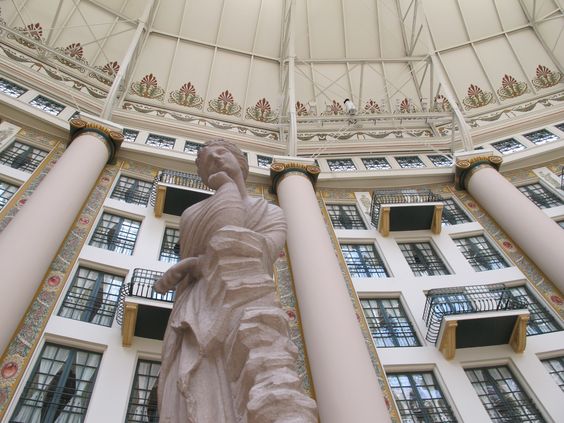 Don’t forget to give your neck a bit of a break and look down as well as up. 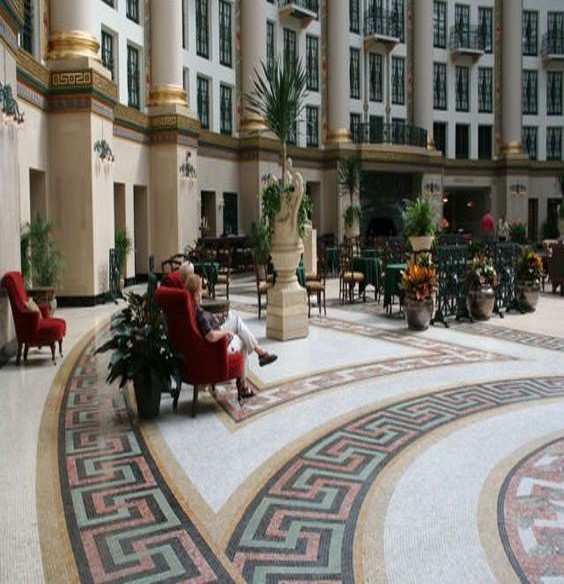 The floor mosaics are nothing short of amazing. 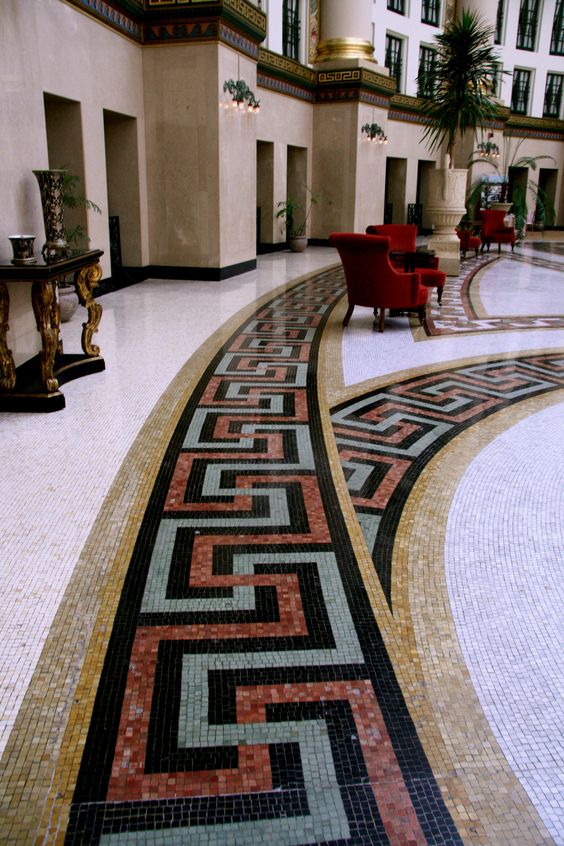 But it didn’t always look this good.

The hotel closed following the stock market crash of 1929, and a succession of schools operated out of the facilities until the early 1980s. It was declared a National Historic Landmark in 1987, and people continued touring the deserted structure until 1989, when it was deemed unsafe. 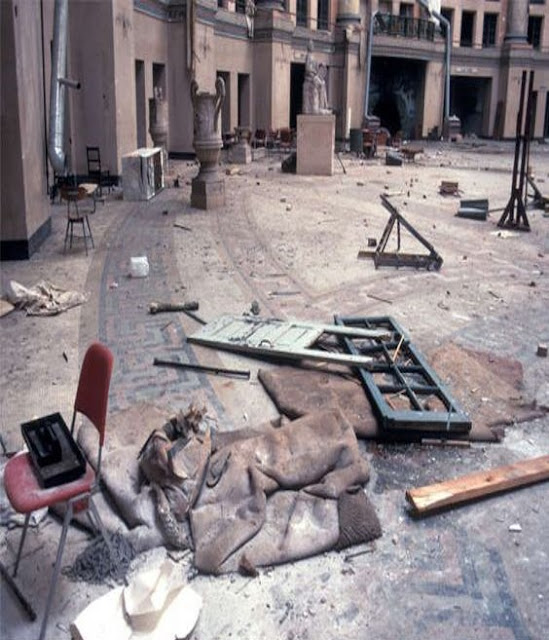 Ice damming collapsed an exterior wall in 1991, and in 1992 the National Trust for Historic Preservation declared it one of the most endangered historic sites in the nation. 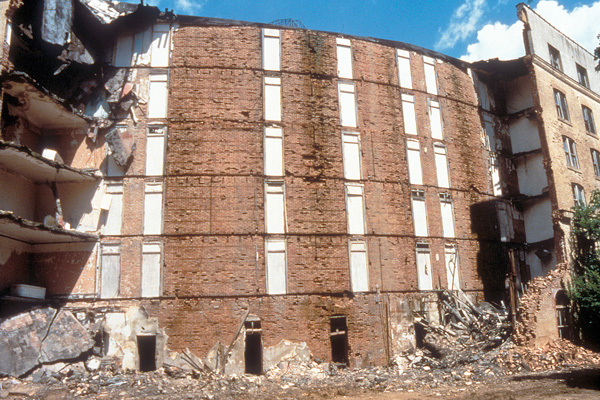 That same year, Historic Landmarks of Indiana matched an anonymous donor’s contribution and stabilized the property, then eventually found a new owner to restore and develop it.

While working on the dome infrastructure, they discovered something not recorded in any of the building’s history. Getting to it required a precarious trip up and across the dome… 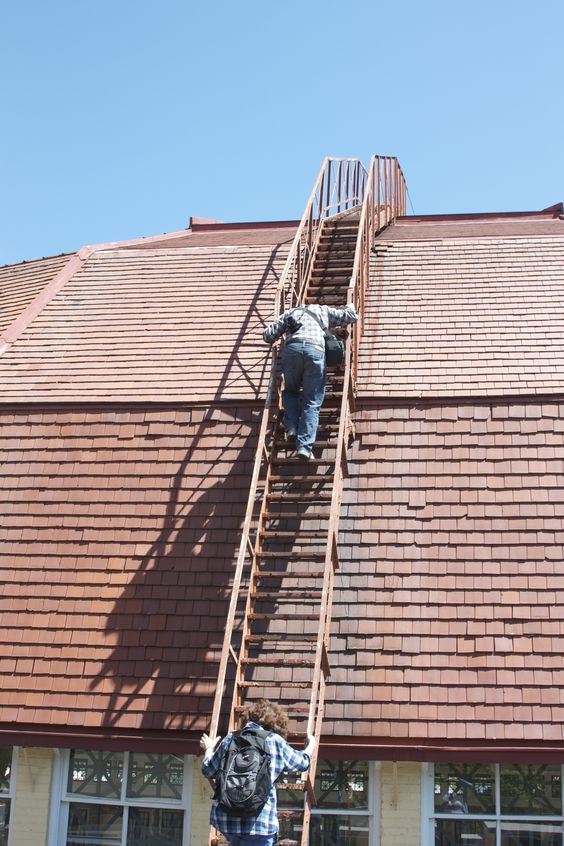 …then a drop down into a dark cupola… 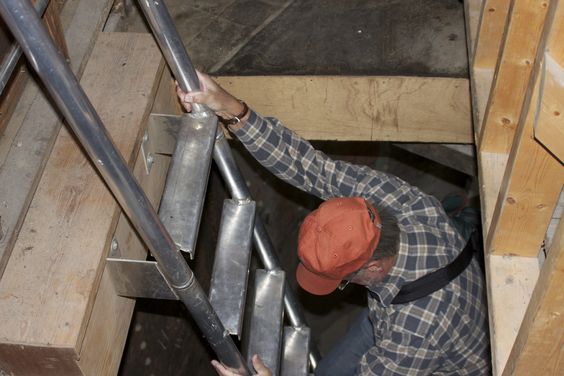 …which has since become known as the angel room. 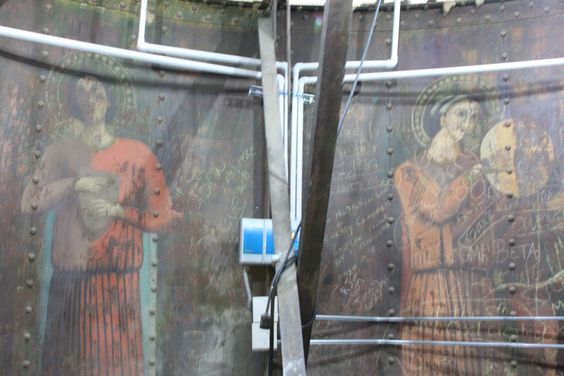 It’s thought that, perhaps, immigrant craftsmen responsible for the hotel’s gorgeous mosaics, frescoes, plasterwork and gilding also painted these angels and “putti,” as a blessing for the building, but no one really knows. The paintings are marred by graffiti from the 1950s.

Although tours of the hotel and its grounds are free, sadly there is no public access to the angels. Photographs of the paintings do hang in the circular hallway that surrounds the atrium, and guides will tell you what they know about them, which isn’t much.

But get some ice cream at the resident sweet shop, rest in one of the rocking chairs along the lavishly curved veranda, and pretend you’ve come to try the waters as well. 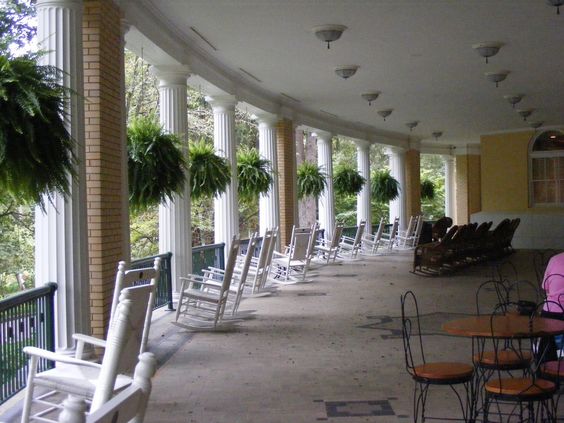 Maybe an angel will speak to you in your reverie. And if you choose to stay a while longer, take it from me that it’s NO waste of money. The accommodations are elegant and the food in the main dining room is excellent. 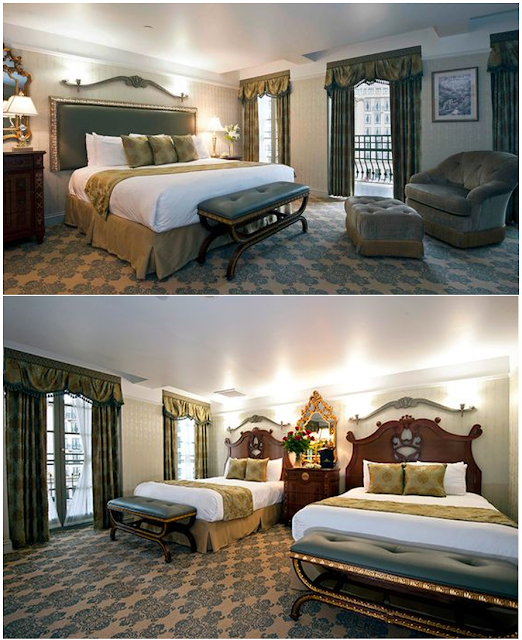 The swimming pool with adjacent spa reminds me of a Roman bath house. 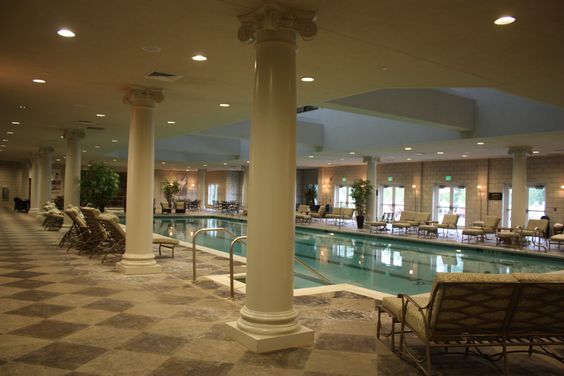 Plus there’s a sister hotel on the property with additional room configurations, restaurants and pools, as well as a casino and PGA-level golf course.

For a few days I felt like LADY Susan, an honored guest at Indiana’s version of Downton Abbey.

Follow the link to learn more about French Lick Resort and the West Baden Springs Hotel.  And if you decide to book a room, here are a few insider tips: