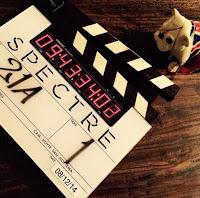 We know him by name and martini preferences, and we all have a favorite among actors who’ve portrayed him. But none of us know much of anything about the place he calls home.

Until now, that is.

Advance tickets go on sale today for the Oct. 26 UK premiere of the latest chapter in the 007 saga, Spectre, which will include scenes in James’ London flat–only the third time in 007 movie history we’ve seen where our hero lives. We THINK we know what James’ pad should look like, though: sleek, modern, gadgets to further the art of seduction, a well-stocked bar, a collection of vintage cocktail shakers, and tinkling cut-crystal highball glasses.

Right? Well, as it turns out, not exactly.

Slideshow: the heretofore ‘veddy’ short history of 007 at home

Is it just me, or could both of these locations actually be hotels? That’s the look–traditional but impersonal. At the very least, he rented the first apartment furnished, given the woman’s dressing table visible behind actress Eunice Gayson. Repurposing it as a bar is a quintessential Bond touch.

And how about that cheesy cotton bathrobe on Roger Moore? I expected such a great lover to own better nightclothes. But then he probably doesn’t keep them on long, and so why bother when just the girlfriends dress in them?

He isn’t likely home much either, which explains a lot, decor-wise. Makes it tough to get the art hung and keep the fridge stocked.

The specter of Spectre

In April, crews filmed two days, outside and in, a swanky, white-brick apartment house at No. 1 Stanley Crescent in Notting Hill, a district in Royal Borough of Kensington and Chelsea. Once a cheap and alternative area of London with low rents, it is today quite fashionable. Stanley Crescent is especially posh, as you can see… 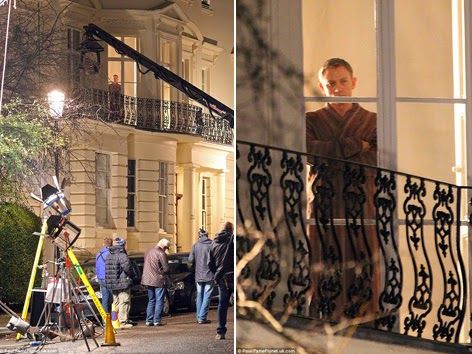 We see him gaze pensively out a well-lit window at night (is that wise, James?). And when we notice he’s bought a better bathrobe, we begin to hold out hope for the new digs.

Here’s a daytime view of the apartment building… 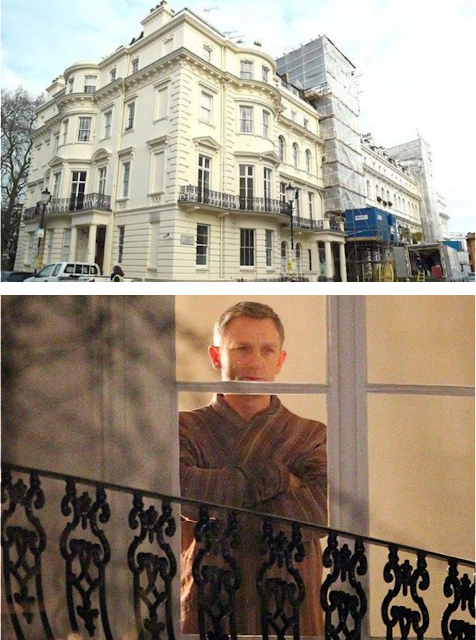 …and a closeup of the bathrobe. Still not great, but Daniel Craig looks good in most anything.

…but this is all we get, cloaked in dim light. Reportedly, the home scenes take place early in the movie when Miss Moneypenny pays James a visit. He has only recently moved in (remember in Skyfall M told him MI6 presumed he was dead, sold his apartment and stored his belongings), hence the packing boxes and unhung art seen here.
Two details revealed in advance publicity:

Which brings us to an inspiration board

At first glance it doesn’t seem like there’s much to draw a “look” from, but there’s more than you may think. All these elements (or something close) appear in this one photo: 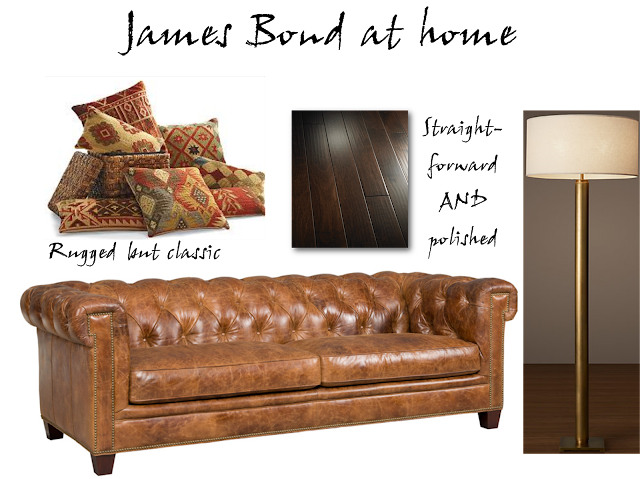 Honestly, this is not the look I expected, but fictional characters evolve with the times in which they find themselves.

A person’s home is an insight into who they are, and I find I like who James Bond is revealing himself to be. Daniel Craig has given us a more vulnerable spin on the famous spy. James is starting to question what he does for a living and how he’s “handled.” The only situation that’s really black and white to him anymore is in a photograph.

And there’s little chance we’ll see much of this apartment–at least in Spectre–since we hear him in the trailer ask a coworker to “make me disappear.” But wherever James ends up, chances are he’ll gather round himself similar items to make himself at home. So if you want the TRUE James Bond look, you now know where to begin.