For all those little girls who dream of growing up to be princesses, the actress Grace Kelly is proof that anything is possible. Had she survived the stroke and car crash that took her life in 1982, she would have turned 86 today.

We remember her still not only for her beauty, but for her talent, for her style, for her charity and, well, for her grace. She was the embodiment of her name, and I’m betting she could still play the part of “Her Serene Royal Highness” to packed theaters. It was a persona that came across on the silver screen long before she met and married her prince.

Andy Warhol toyed with Grace’s image, making her one of his pop art “screenprintesses,” alongside Marilyn Monroe, Elizabeth Taylor and Audrey Hepburn. But how did the real Grace Kelly live? On her own in New York and then after her marriage in the Palais Princiers at Monaco? What was the at-home style of this style icon? Did moving into a palace change her, or did Grace change the palace?

The debut of George Stacey and the Creation of American Chic by Maureen Footer last year gave us a bit more insight, as Stacey was who Kelly chose to decorate her Fifth Avenue apartment. When she married he became the official palace decorator, where he also reenvisioned private family spaces at the palace, on the royal couple’s yacht, and at their country house at Roc Agel, France.

But photos of their collaborations are few and reveal much less than we’d like to see.

Granted, Footer’s book is about the “George” half of the team rather than Grace. She does confirm, however, that Kelly’s favorite color was yellow, but she most liked to WEAR green, and that she developed into a lover of all things French (like Stacey) long before she met her prince. All these things show up in the spaces Stacey designed for her, representative of an aesthetic that came to be known as “American Chic,” that is, modern with a continental European flair.

Books about Kelly say she moved from the Barbizon Hotel for Women to her Manhattan House apartment only with her parents’ permission. One biography goes so far as to say she was “installed” there by her father in an apartment her mother decorated. One of her bridesmaids described this apartment as quite plain.

“The living room was without charm, character or gender,” wrote Judith Balaban Quine in her book The Bridesmaids. “It wasn’t ugly; it was utterly bland. Furniture, fabrics and colors alike were all resolutely practical. Everything seemed brown.”

We can hardly judge the fledging Grace for its lack of personality. The apartment was, in fact, like those of many single girls newly launched on a career (myself included): filled with family cast-offs. But after Kelly’s successes in Mogambo, The Country Girl, and To Catch a Thief, she moved to a more fashionable address—988 Fifth Avenue. There she had a living room, a library, a dining room overlooking Central Park, four bedrooms, one of the highest rents in town at the time ($634 a month), and George Stacey to help her inject her own style.

His reputation likely preceded him, as Blanche and Leon Levy, neighbors of the Philadelphia Kellys were long-time Stacey clients. Kelly and he became friends who corresponded regularly, and she introduced him to people who would become clients—Ava Gardner, for one. 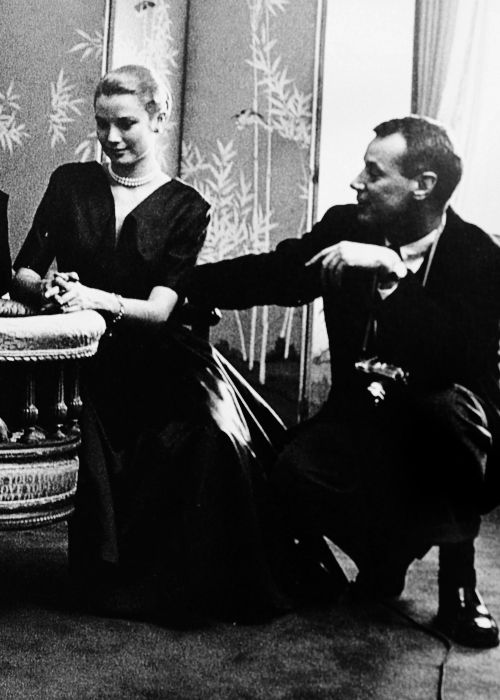 Photographer Howell Conant, shown here with Kelly, was her favorite photographer through the years. This particular photo was taken around the time of her engagement in those Fifth Avenue digs. The oriental screen in the background was signature Stacey, as was the embellished conversation settee she’s both seated on and leaning against.

Ditto the comfy Chintz chairs and French table—definitely Stacey picks for the ivory and pale blue living room meant to showcase the actress to her best advantage and provide a space for a contemporary, successful career woman to host elegant dinner parties and informal gatherings. This photo was obviously one of the latter.

As Conant photographs Rainier photographing his wife, we get to see more of the room—a grand piano and a French chair and secretary. In this photo and the preceding one, the princess is expecting another princess and collecting items for her layette while on a shopping trip stateside.

…which reappears in a photo obviously taken much later. The style of the chair in the background is the same, but sans chintz. 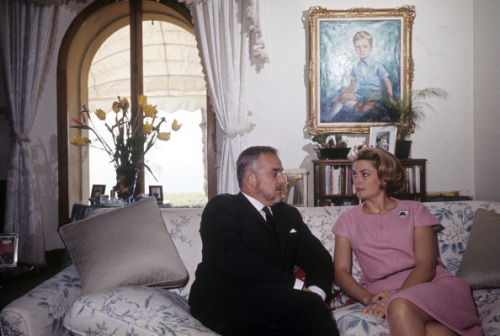 How do you make a palace into home? Especially since there’s a limit to what you can change, and palaces always have that pesky “palacey” look—soaring architecture, elaborate plaster moldings, gilding, marble floors and fireplaces, all those ancestor paintings, swords and armor and such. Intimidating, to say the least! Stacey updates helped lighten the look of what couldn’t be changed.

For instance, compare the draperies in the Salon des Glaces in this wedding portrait…

…with those in this photo of Princess Stephanie in the same room. Stacey brightened and redesigned the pelmets and updated the rest of the room’s fabrics from more of a gold to a true, sunshine yellow, Kelly’s favorite color. 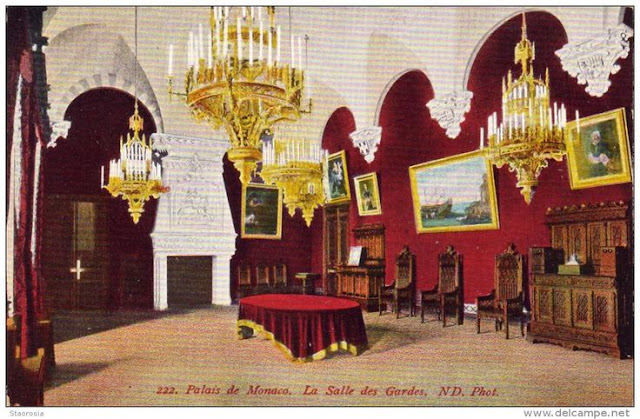 …with this one, after George and Gracie had their way with it. Notice the casually layered rugs, another practice for which the designer became known.

Though I couldn’t find a “before” image of the palace reception room, its redo as shown here emphasized architecture and downplayed fuss. The curtains were sharply outlined in green taffeta, the symmetrically placed chairs were upholstered with dark green seats, and the table was draped in a richly embroidered and beribboned deep green velvet. 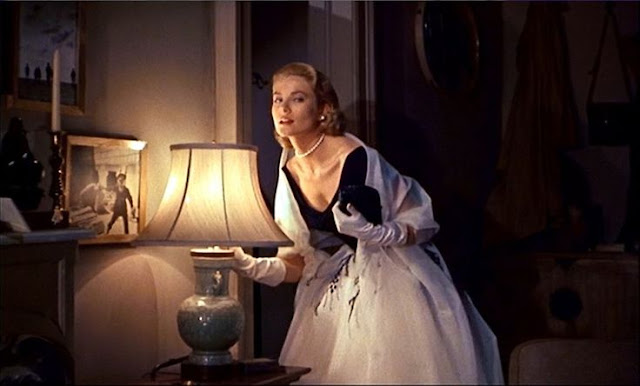 The look of the reception room reminds me of Grace herself in this famous gown from Rear Window. What appears black in this photo was actually dark green!

Stacey and Kelly had more leeway in redecorating private quarters at the palace.

He created a contemporary conservatory-cum-family room, complete with a telescope for watching the goings on in the harbor.

And he addressed the lofty scale of the windowed space with the towering Coromandel screen and hefty writing table seen here behind Princess Grace, as well as the generous borne on which she’s seated. He also found an unobtrusive spot for Kelly’s Oscar. Can you pick it out?

You may be gone but we haven’t forgotten you. Whenever someone says “elegance,” yours is still the picture that comes to mind. 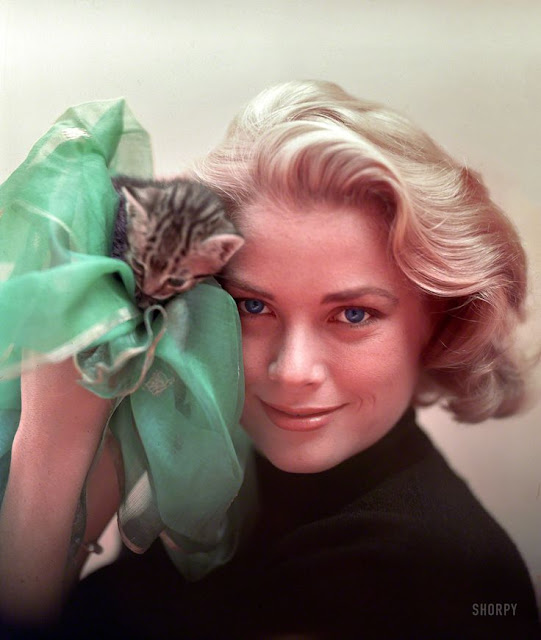 And speaking of pictures, this one is my favorite of Grace. OF COURSE it’s with a kitty!