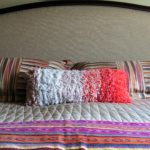 Have you noticed nearly ALL the cute-as-can-be throws out there are mostly 60-inches long. So if you want to display on a king bed–generally 72-inches across–you’re stuck with draping a corner. You could opt for a second quilt or blanket in king-size to get the look you want, but then your choices dwindle and the cost goes up.

Necessity IS the mother of invention 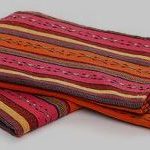 This is a Karma Living throw I already owned and have used in various spots around our house. At the time of my master bedroom summer refresh, it was packed away in my linen closet, and I’d considered selling it in one of my online stores. When I paired it with my new master bedroom shams though, the mix of color and pattern clicked.

But alas, it was, of course, too short to span the foot of the bed!! 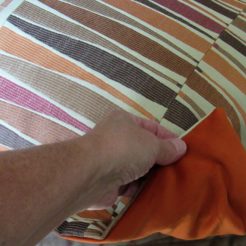 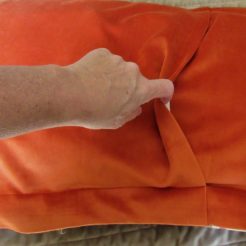 That’s when I got the idea to EXTEND it using some fabric left over from my pillow sham backs–an upholstery velvet/suede in a gorgeous persimmon orange that went perfectly with the throw. 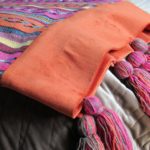 I also wanted BIG tassels to extend the look of it even more, and after a search through my bag of yarn I found a perfect match that brought together all the colors in the room. A perfect “use what you have” project! 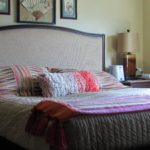 While I pondered exactly HOW to attach the extensions and attach the tassels, I set about making said tassels–all 14 of them, seven per side, which took several few weeks. I could only do a couple in a sitting because it was boring stuff AND it made my hands cramp.

But it gave me the time to think through the rest of the project. And by the time I finished, I’d figured out how to attach both fabric and tassels so raw edges were hidden, stitching didn’t show on the outside, tassels hung correctly, and there was a minimum of hand-sewing.

If you want to make tassels, follow the link to another post I did on that. I wanted these tassels much bigger than any I’d done before though–longer and fuller. So I think I did about 150 wraps for each one and used up the better part of two skeins of yarn. 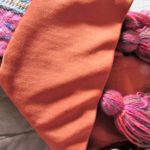 But they turned out great, right? More on attaching them later, but first…

Before sewing I needed to remove the existing hem in my throw. Because it’s made from a hand-woven fabric that unravels easily, I did this very carefully with a seam ripper and embroidery scissors. The hem had been double-folded, and I pressed the folds out flat with an iron.

Then I cut the fabric extensions–one for each side–long enough to span the short end of the throw, adding an inch for seam allowances of a half-inch on either end. I then cut each length 10 inches deep, which would produce about a 4.5-inch finished band on each side when the fabric was doubled and edge-finished.

I used a technique called “stitch in the ditch” to machine stitch and close up the raw edges without stitches showing on the outside. It’s something I learned in tailoring classes, but it’s also used a lot to finish quilts.

What is stitch in the ditch? A simple way to have INVISIBLE top stitching. But rather than try to explain it, here’s a short video–less than five minutes:

My project was complicated a bit because I also had to finish the four corners AFTER attaching the band to the throw but BEFORE stitching in the ditch. These had to be sewn right sides together, trimmed, turned and pressed. 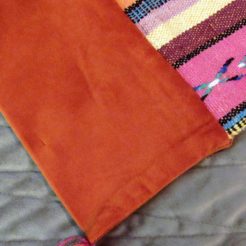 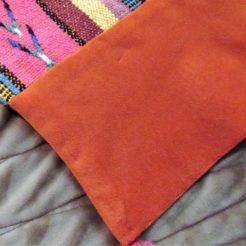 It was bulky and tedious. And, as you can see, I didn’t do a perfect job on these two, though they were my best out of the four. But I didn’t worry about it all that much because I figured I could hide these areas when I folded the throw to display it. 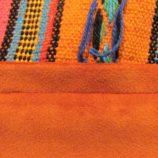 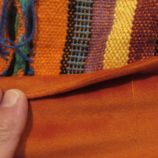 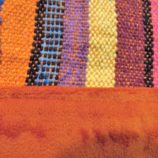 These pictures show my finished stitching in the ditch. On the underside the stitching does, of course show (left). I allowed a deep enough seam allowance to catch both the raw edges of the throw and the velvet extension (center). But I defy you to find the stitching on the right side of the throw (right). They simply disappeared when I topstitched directly into the previous seam. 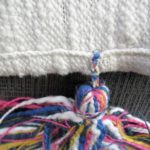 To figure out how to secure the tassels to hang correctly, I examined an Anthropologie throw with large tassels that I use in my living room. Its tassels have woven hangers that are stitched into the edging of the throw, then handstitched to tack them down from the hemline to the very edge. 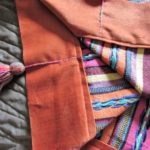 All well and good when the hem is under an inch, right? But I needed woven hangers at least five inches long for all 14 tassels, which I would then need to hand-tack down across a span of 4.5 inches. But there was really no other way to do it. 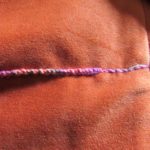 First, the hangers: When I made the tassels, I looped a long piece of matching yarn through the top to tie them off. To weave these two strands together, I used the same technique as for making a thread loop. My mom taught me how to do this ages ago. This really short video does almost as good a job of explaining it as she did:

I used a darning needle with a large eye to accommodate the yarn. Then I simply continued weaving my hanger until I ran out of length. To knot off the end, since I wasn’t going to loop it into anything, I simply passed the needle end all the way through the loop and pulled tight. 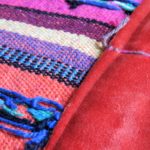 I had already marked where I wanted to place each tassel, so before stitching in the ditch I tucked the ends into place and secured them with pins. I was careful to measure the length out so the tassel heads would just touch the edge of the extended throw. 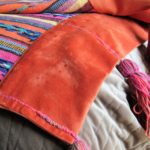 Only after stitching in the ditch did I go back and tack down all the tassel hangers by hand, being careful to sew through only one thickness of the velvet.

I didn’t want those stitches to show on the outside of the finished throw, you see. 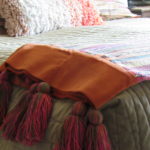 The tassels hang beautifully, if I do say so myself! 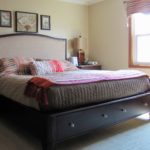 And the finished product accomplishes what I’d hoped.

If you want more, there’s more in store! 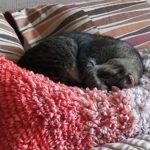