If your heart still belongs to Marsala, Pantone palette #6 may be the one you want to usher in the New Year. It’s the only one of eight to combine the 2015 color of the year with 2016 colors Rose Quartz and Serenity.

Other features unique to palette #6 include:

In choosing examples, I discovered a palette that, more than any of the others, brought the outdoors inside. But whereas that outdoors was lush and tropical with Beryl Green present, it was dry and aloof like the deserts of the American West and Southwest with Canyon Clay in play. Both Greige and Marsala bridged these extremes.

I’ve alternated between the two to accentuate the difference. See if you don’t agree.

Scenic wallpaper carefully frames these tall, narrow windows in shades of pink, blue and green to blur the lines between indoors and out. However, it’s the Beryl Green area rug that grounds the space like a rich emerald lawn.

The curvy and comely pink chaise—with Canyon Clay top notes—begs to be lounged on. It has a swooping arm perfect for striking a languid pose, which is probably why it’s named after Cleopatra. It was designed in 1970 by Geoffrey Harcourt for Artifort. It reminds me more of something a modern-day Jay Gatsby might have brought into his mansion to lure the elusive Daisy.

How the west was won

Clearly the canyon clay lends a southwest feel to this Deer Valley, Utah retreat. Marsala bands on the Greige curtains, on a kilim throw pillow and in the striped ottoman heighten the drama. I love the spiral lamp on the left and the Mexican-looking accent chairs on the right. See/read more about this home by Massucco Warner Miller Interior Design on Houzz.

The lampshades say “tropical paradise,” the animal-print upholstery chimes in “exotic,” and the Chinoiserie jars—one filled with palm fronds—say “timeless.” The bits of Rose Quartz and Serenity lighten up the feel of the carved British Colonial furniture in this room designed by Anna Spiro that appeared in her book Absolutely Beautiful Things.

This could be India, this could be Africa, this could be Cuba. And Papa Hemingway just could have sat at this desk working away. I almost expect to see a six-toed cat curled up against that pillow and another one taking a bath on the top of the cupboard, don’t you?

You might guess you were in Arizona if the view out the windows didn’t tell you differently. This Sydney, Australia, loft juggles Marsala, Canyon Clay, and Rose Quartz without dropping the rosy-toned ball. Greige—hiding in the bricks as well as the artwork—grounds the space, while the gorgeous kilim rug pulls everything together. See more photos of this home at Brett Mickan Interior Design.

This lovely living room by John Lewis could inspire just about anyone to take up painting—or at the very least, to invest in Monet. You would think the three different florals—sofa, rug and throw pillows—might clash. But instead they make you feel as if you’re immersed in bloom.

Scale plays a part—the rug pattern is much larger than the other two. But the sofa and pillows work because the larger sofa is grounded in white and the smaller pillows are grounded in black—or dark Greige, as it may be. On a sunny or cloudy day, this room is sure to cheer. 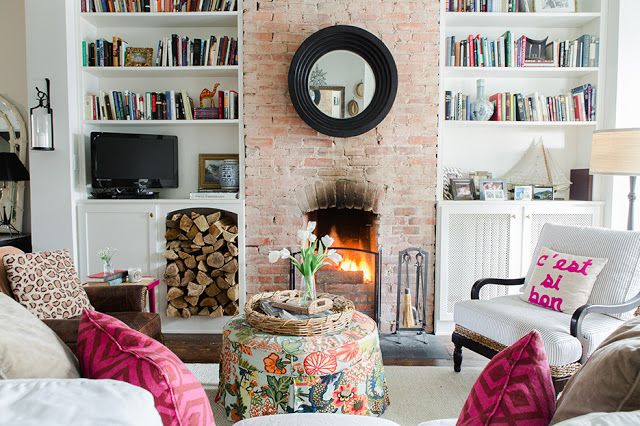 And yes, it is c’est si bon, es tan bueno, and so, so good. The colors of the palette collide in the botanical print upholstered ottoman, lending a European sophistication to a room that also retains a hacienda feel, thanks to the use of wicker, wrought iron and dark woods.

The brick certainly isn’t adobe, but its Canyon Clay color still dominates the room, and the liberal use of white keeps it from feeling oppressive. My favorite part is the peachy-taupe animal print pillow!

Some mother somewhere has next to no trouble getting her daughter to go to bed at night! Who wouldn’t want to jump right in when she can quite literally float off to dreamland? I like how the geometric rug contrasts with the floral mural. See/read more about this home addition and renovation by Tamara Rosenbloom Design on Houzz.

This living room designed by HGTV host Emily Henderson appeared in her book Styled. It emphasizes the two blue velvet Chesterfield sofas, but the mix of pink tones establishes the old hacienda feel. See/read more about this California bungalow at Country Living.

Follow the link to see all of Pantone’s 2016 palettes that use colors of the year Rose Quartz and Serenity, as well as learn about the intelligence behind the choices, and follow my blog with Bloglovin