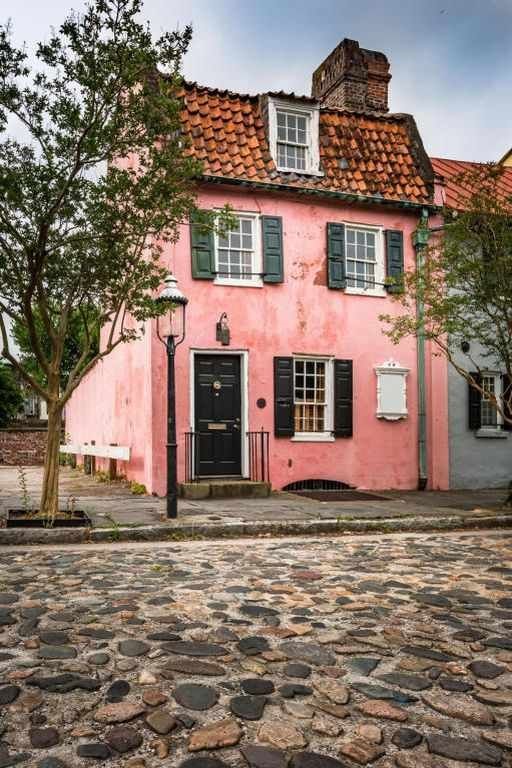 Architectural Digest ran an online feature yesterday about how millennial pink love is moving from the inside out and coloring the world of home exteriors. The pink homes they shared were delightful—like a pink lemonade popsicle on a hot day, which yesterday surely was.

But even though one home featured was in Charleston, SC, the article neglected to include THE Pink House of Charleston, SC—one of my fondest memories from our 1989 honeymoon.

It got me reminiscing about that sweet little building (this is, in fact, the photo WE took of it on our honeymoon). It’s the oldest structure in Charleston and the second-oldest masonry building in the United States.

It gets its pink color not from any paint—millennial or otherwise—but from 18-inch thick Bermuda stone, a type of limestone formed from coral, which is naturally pink. Just don’t let its delicate color fool you. This Bermuda stone house has come through its share of hurricanes unscathed. 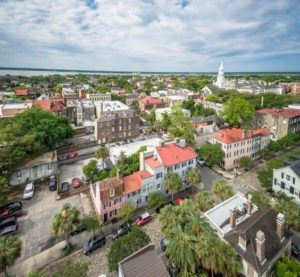 The house was a pottery gallery when we visited, but it began life as a pirate’s tavern in what was then the city’s red light district, called Mulatto Alley. Sailors and privateers stopped by the Pink House for the three Ws—whiskey, wittles and wenches. Combined with its age, I guess that makes it the country’s first boho home, huh? Bohoho and a bottle of rum! Haha!!

In the years since, it’s been an entertaining venue, a law office and library, an art gallery and studios, and, most recently, a private residence. And guess what? It’s FOR SALE again! 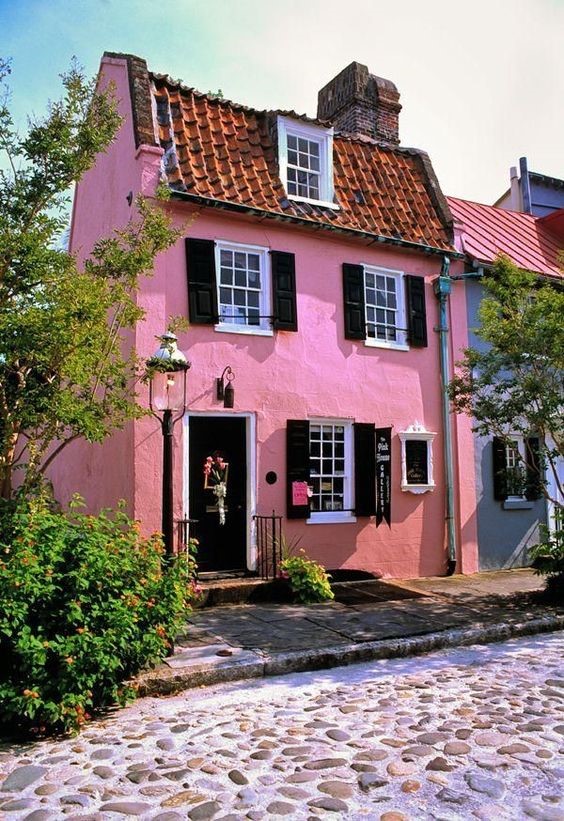 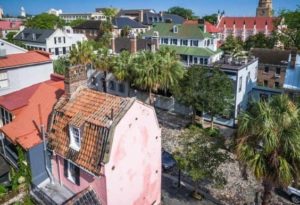 See those terracotta tiles on that Dutch gambrel roof? Most are original to the home. An old story claims they got their curve from being slapped against a worker’s thigh. 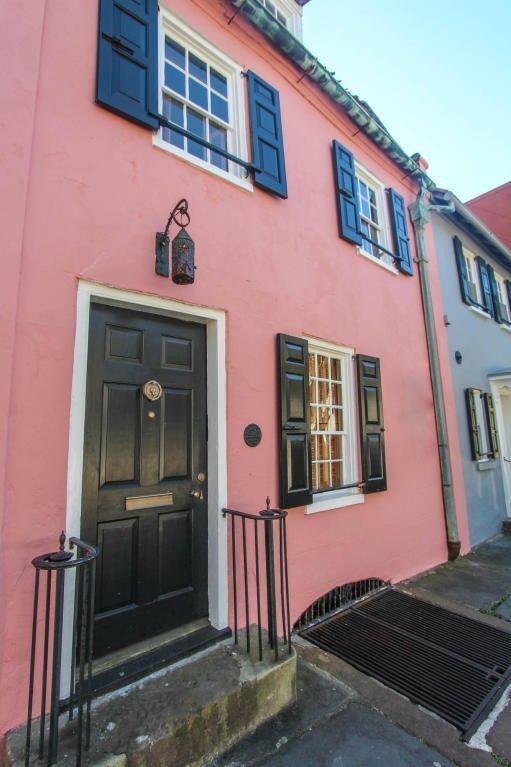 One thing, though…um, the Pink House isn’t very big. At just over 1,000 square feet, each of its three floors is basically one single room.

But oh, what rooms! 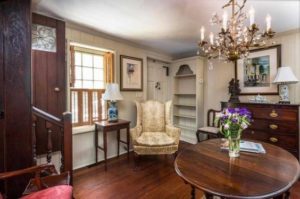 The first two floors of the original part of the house are paneled and floored in black cypress. The ORIGINAL black cypress pulled from surrounding swamps in 1688. When we visited, this room was ALL unpainted black cypress. 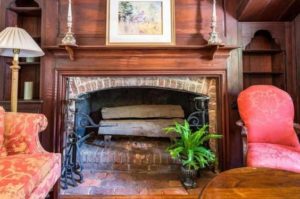 The potter we met there, Sherry Palumbo, told us black cypress was a common building material in old Charleston because of its decay resistance. But, she said, it was almost always painted and thus, almost always peeling, because it doesn’t hold paint well. This was one of the few buildings in the city where the cypress wood was left unpainted (until recently, that is) because, well, it was “just” a tavern.

Tavern or no, I fell in love with this fireplace. 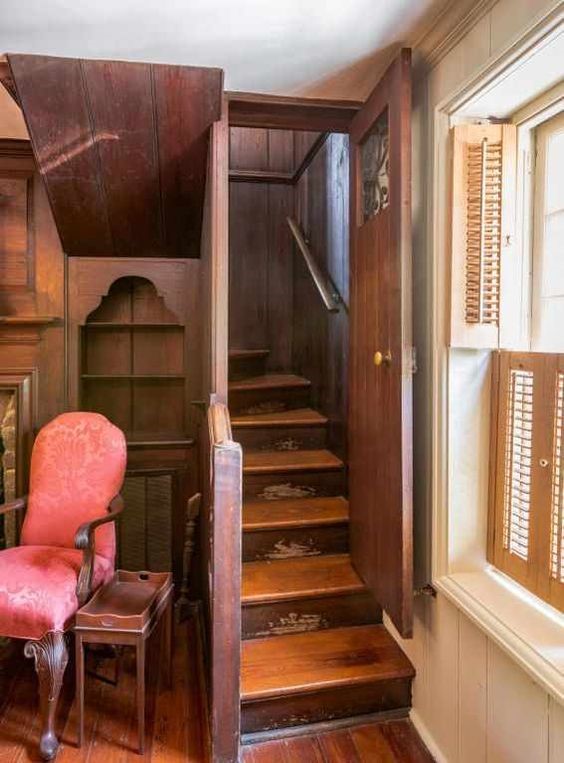 Follow me on up to the second floor, will you? 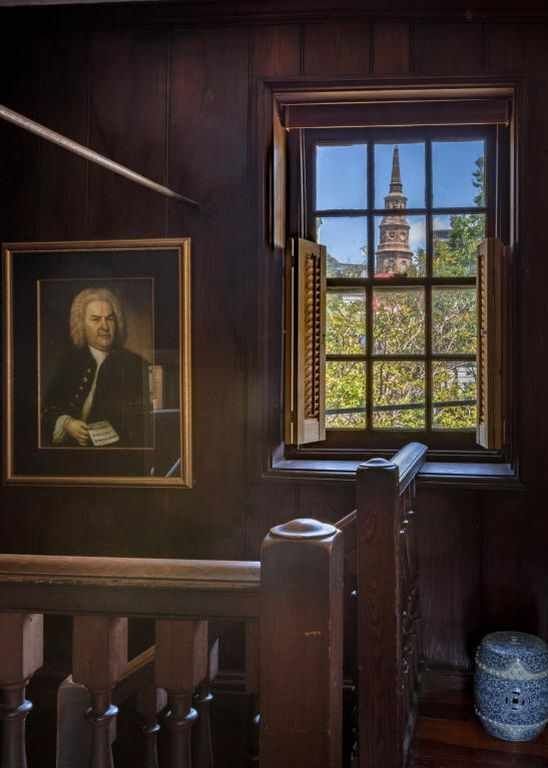 That’s St. Philip’s through the window, one of Charleston’s famous churches. 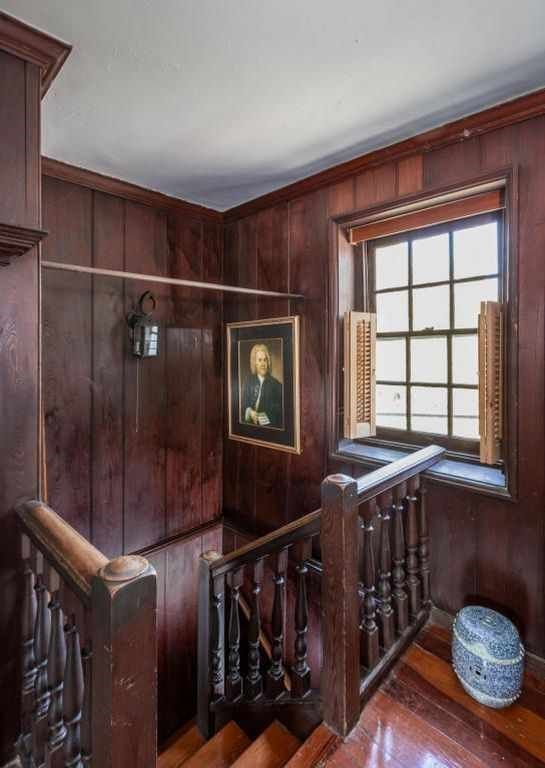 This may look like a landing or hallway, but one room per floor, remember? 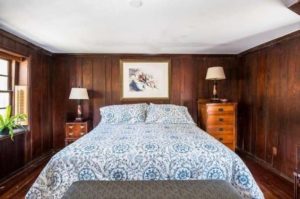 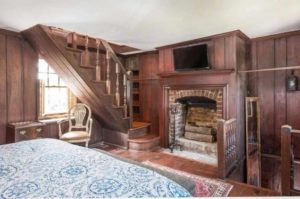 Though it may be small, there’s a lot of living packed into each level, as well as ANOTHER gorgeous fireplace. 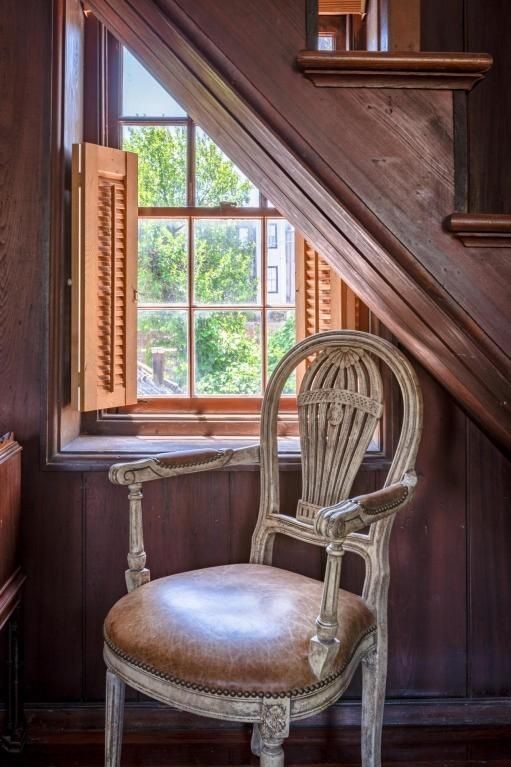 Perhaps you want to sit a spell and rest before we climb yet another narrow staircase to the garret? Ready? Let’s go, but watch your head! 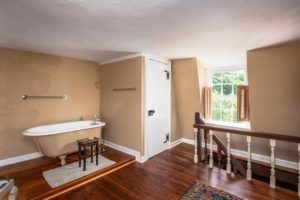 The folks who converted the Pink House into a residence made a full bath out of the third floor. 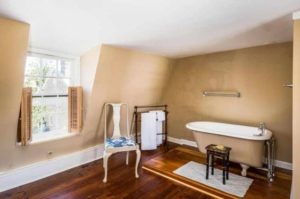 This floor is the same size as the two below it but seems smaller because of the ceiling clips.

The potter told us the top floor of the house was known for its views of Charleston rooftops. This is the photo we took out one of the bathroom windows, though then, of course, it wasn’t a bathroom.

This is Charleston, so there’s a walled garden, right? 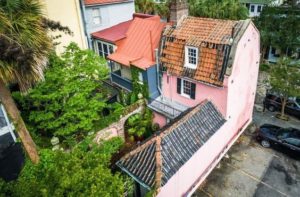 Right! And in that category, the Pink House does not disappoint. The extension you see here was added in the 1930s, which created a walled garden. 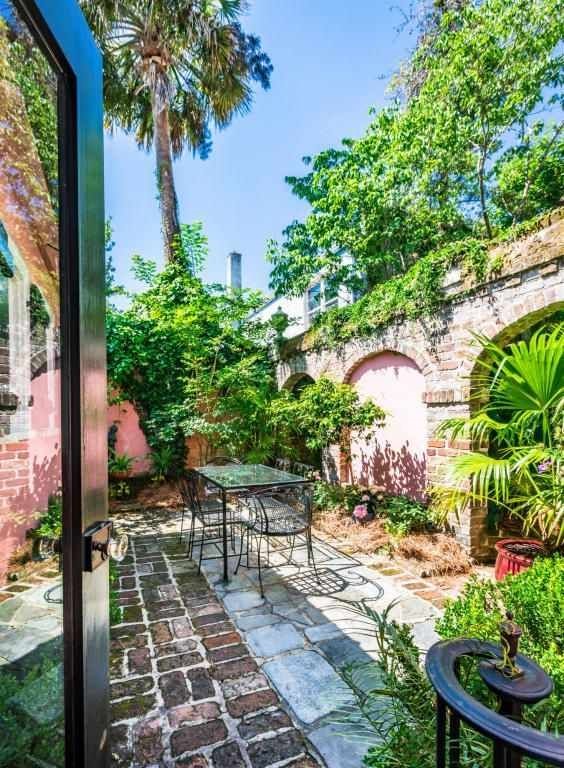 The garden was designed by the landscape architect Loutrel Briggs, a Cornell University graduate active in the Charleston area. 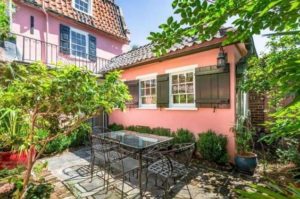 The extension was used by caterers for parties thrown here, and the lawyer who added plumbing in the 1950s retiled the roof of the extension to match the rest of the house. 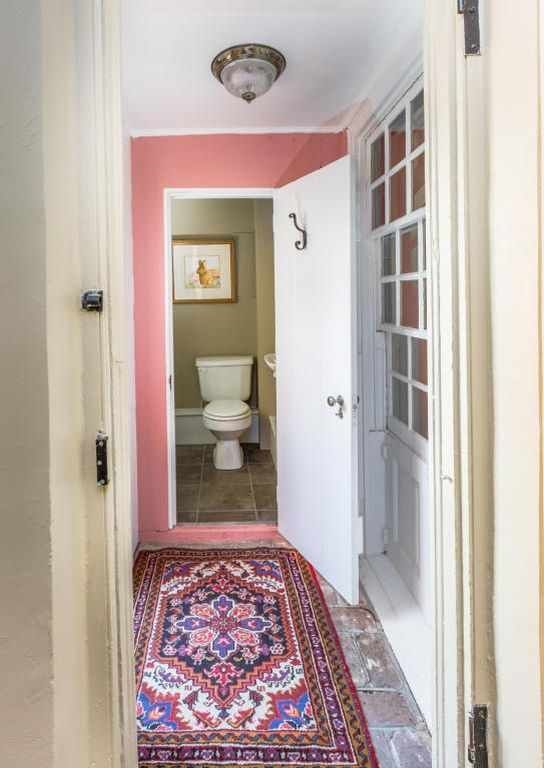 Inside, that meant a half-bath on the first floor, which was the house’s ONLY bath for 40 years or so. 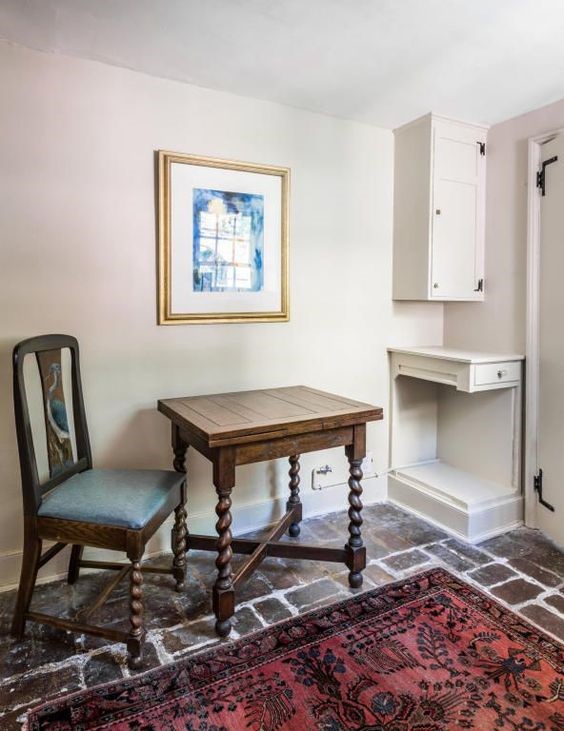 Though the lawyer used the additional space for offices, today there is a small eating area… 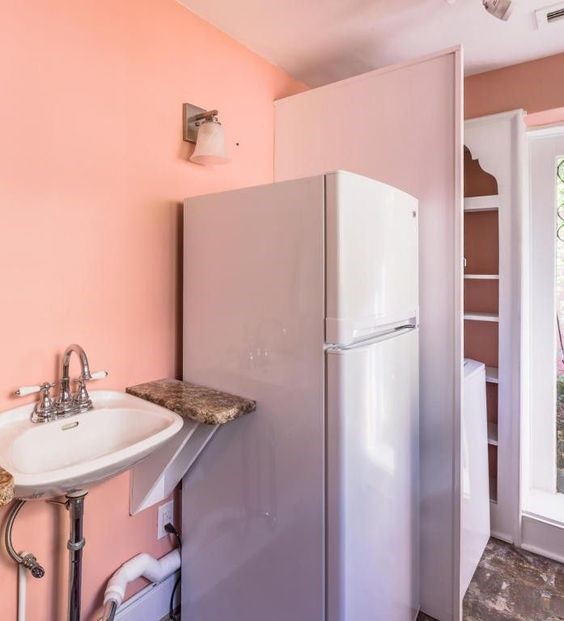 …in an equally spartan kitchen. 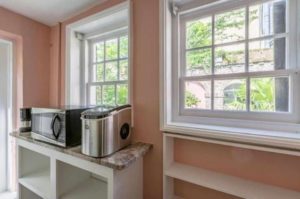 Point of fact is there is NO proper kitchen here. But it does look like there’s a bread-maker, if that’s what’s next to the microwave. I wonder if the sellers will throw it in?

All that aside, there’s more to the Pink House

For ME, anyway. There’s this sweet little pot I brought home with me—a pink pot from The Pink House Pottery, get it?

And then there’s The Pink House potter, Sherry Palumbo. I tried to find what happened to her since the house became an art gallery in the early 1990s, but have had no luck. Is she still throwing? Still in the Charleston area?

The Pink House pink basket pot has moved around my house through the 28 years Chris and I have been married. At our previous home, it was in the guest bath. And it started out in the same place when we moved to our condo.

But then I redid our bedroom, adding more pink, and got the idea of combining it with this sweet little pot from West Elm.

Which I then added to a vignette on top of our armoire, where it smiles down on me each day. 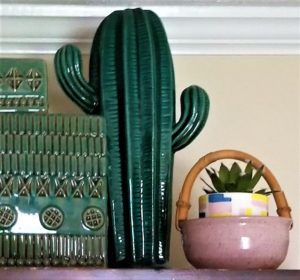 A pink pot from the Pink House, which I, too, could own if not for the $899,000 price tag. Oh well, the summers are too hot in Charleston anyway. Go in the spring, like we did.

I hope you enjoyed your Pink House tour. And be sure to let me know if your offer’s accepted. I’ll expect an invitation to the house warming, don’tcha know. 😉 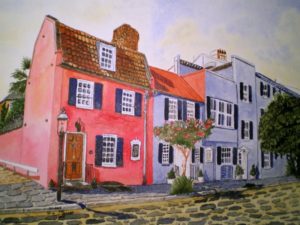