Beauty is truth, truth beauty—that is all
Ye know on earth, and all ye need to know.

The blogosphere did its utmost this week to write some new verses to Keats’ famous poem. Or at least this boho sometimes-poet thought so.

Covers shared on the blog included past issues of Harper’s Bazaar, Vogue, Time, and Interview, each featuring a woman’s image, but there are more to see if you follow the artists’ links. “Each cover is unique and as creative as the next,” writes the SF Girl herself, Victoria Smith, “allowing us to see past normal standards of beauty and advertisement and view them as a whole new work of art.”

I’m with Victoria on the inspiration these covers generate. I think I’ll spend my Saturday with my own colored markers and pencils and go to town on some back issues gathering dust on my bookshelves. I try never to miss a good excuse for play.

And so what? I’d hardly be alone.

Adults everywhere are so caught up in a coloring craze that last summer coloring books took up the top 10 spots on the NY Times list of games and activities. They often appear in Amazon’s lists of top-selling books as well. 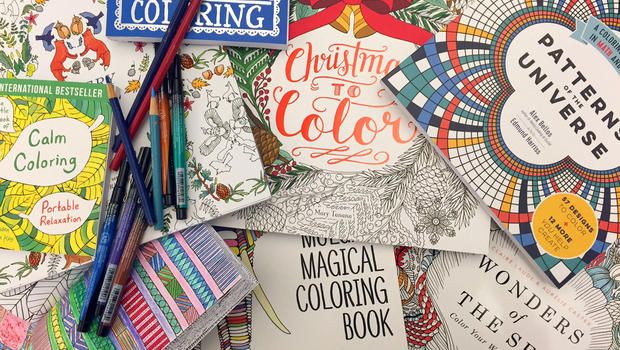 Libraries across the United States are holding adult coloring programs, and meetup groups are forming in many cities, according to CBS News. “It’s almost hypnotic—the scratching of the pencil on the page,” one adult participant said. “You’re creating something beautiful that you might not do under other circumstances.”

Turns out coloring and doodling are great ways to unwind alone, as well as connect with others who enjoy the activity. And art therapists use both to guide clients into other arts.

Adult coloring books can be found on a myriad of subjects, but there’s also a lot of free stuff available on the Internet. Just this week retailer IKEA put five designs out there for the downloading, hoping you’ll personalize them and share your work at #ColorWithIKEA.

In case you missed these color-crazed links first time around:

1. Justice for Her Honor

Supreme Court Justice Ruth Bader Ginsburg is a liberal force to be reckoned with and a staunch defender of women’s rights. Just this week she was in the news again with a majority opinion that dealt a blow to big business.

She also has a dazzling array of her very own Internet memes! Who knew anyone associated with such an august body as SCOTUS could harbor a cult following?

Several fierce dissents by Ginsberg inspired Shana Knizhnik to launch Notorious RBG on Tumblr in 2013 to track what the justice said and the buzz she created just by being Ruth. Eventually Knizhnik teamed up with women’s rights reporter Irin Carmon, and the two began putting together an illustrated book about their favorite female badass. The partnership resulted in NOTORIOUS RBG: The Life and Times of Ruth Bader Ginsburg, a 240-page illustrated book just released through Indie Bound for $19.99.

Follow the link to Design Sponge as Glory Edim catches up with Carmon at a book-signing and learns more about Ginsberg, what inspired the authors to write about her, and what’s inspiring them now.

2. Painting With a Broader Brush

Design Sponge’s Grace Bonney profiles San Francisco artist Rebecca Szeto and her paintbrush portraits in Thursday’s Fine Art Focus. Szeto uses the weathered forms of used brushes to depict “lost, obscure and powerful stories of women across history and geography,” like the unidentified Girl With a Pearl Earring above, after Jan Vermeer’s 17th century painting of the same name.

Szeto works in a range of materials, creating fabric sculptures, videos and performance pieces, carvings, paintings, and site-specific installations. She also blogs about the art world on The Lab.

Rohini Wahi introduces us to the compelling Instagram feeds of museums around the world, including London’s Fashion & Textile Museum, whose collection is referenced in the above photo. 10 Inspiring Museums on Instagram gives a behind-the-scenes peek at fascinating artifacts and compelling programming.

And don’t forget to check out the comments for more feeds added by readers, including @52museums, where a different museum posts to the account each week of the year.

We were, weren’t we?

The latest video to go viral shows a dad hooking up a Nerf gun to his daughter’s tooth. She pulls the trigger and out it pops….

The loose tooth, that is. Can’t tell whether she’s glad it’s over or ready to cry.

Anyway, follow the link for 10 more videos of inventive extractions that use slingbows, parrots, javelins, cars, and remote-controlled toys, to name a few. What do they all have in common? Parents “helping.”

In my day we whined in pain for a week and wiggled it until it tore loose or dad paid an older sibling to knock it out in a spat. Small wonder the Tooth Fairy pays better these days. Parents need to buy their kids’ silence.

This fan fan can can-can

Mentalfloss reports that an hour-long video of an oscillating fan is more popular on Netflix right now than the documentary Making of a Murderer. The fan even has its own trailer…
Not bad for a fan that moves absolutely no air at all. I guess it’s the white noise that has ‘em glued to their seats. Go figure.

File under TMI (no pictures, but you’ll thank me)

From the home of textile designer Jack Lenor Larsen…

Now that’s what I call FUNiture!
If you’re stuck in the path of that developing nor’easter, make sure you have gasoline for the snowblower, lots of wine, and plenty of munchies. Then hunker down inside and stay warm until the flakes settle.