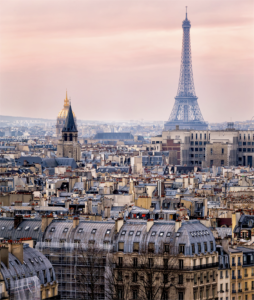 As a child, my cousin and I played a game with our grandma’s catalogs. We flipped through the pages, choosing furniture for “our homes” and attire for “our weddings” and married life. Because the catalogs changed twice a year, each time it was a new adventure.

I’m going to play a version of that game in this post.

I’ve never been to Paris. I’ve always wanted to go, but it doesn’t seem likely in the near future. Still, I need a vacation. So I’m going to scour my Pinterest boards–one is called “Oo-la-la!”–and the internet for things I imagine Paris to be and furnish My Paris Apartment. It will have a Boho slant, of course, since that’s where Boho began.

Won’t you tag along? 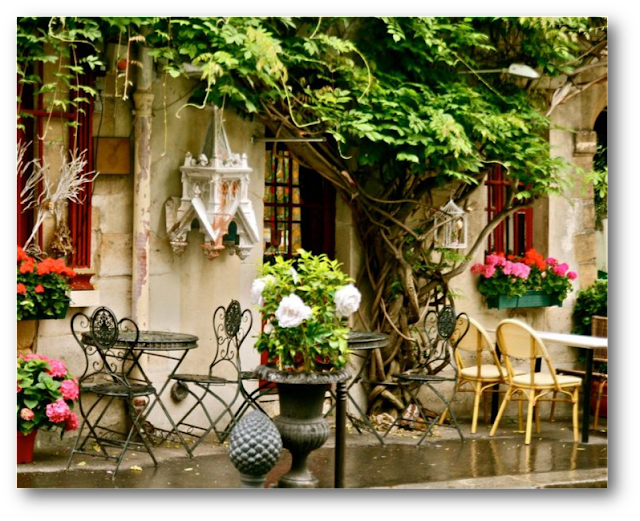 …Yes, I know this is a cafe, but the entrance to my Paris apartment would look something like it. I would live upstairs. Purchase this print at Etsy store VitaNostra. 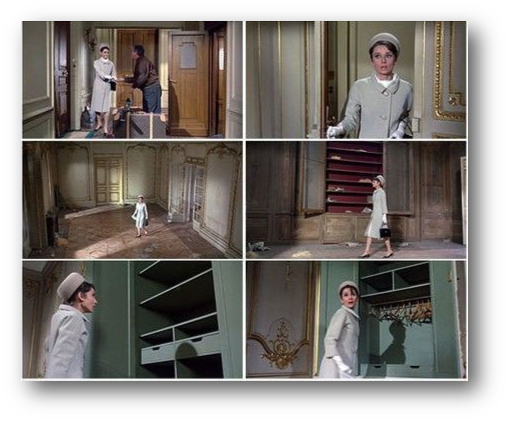 Keep in mind as I take you on this tour that the apartment shared by Audrey Hepburn (Reggie Lampert) and her mysterious, missing husband (Charles) in the movie Charade is my idea of what a Paris apartment should look like, architecturally. Charles apparently sold all their belongings and fled while she was on a skiing holiday with a friend. Good thing I came along when I did, recognized the apartment’s good bones, and took over the lease for her :). The above photos serve as my “before” shots. Now, to the “after”! 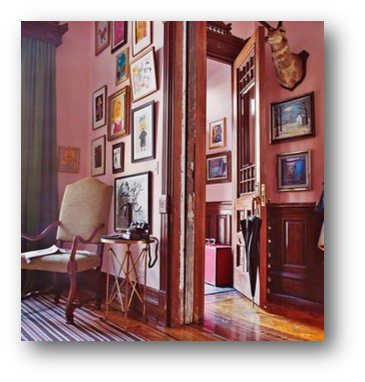 …Enter through a vestibule (above, found on The Elements of Style) and see the facing foyer wall (below, found on House of Turquoise, home of designer Jill Sorensen, photo by Tanya Malott). 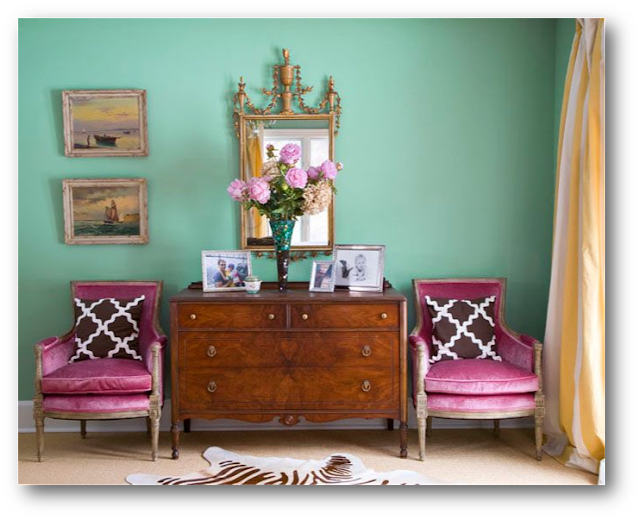 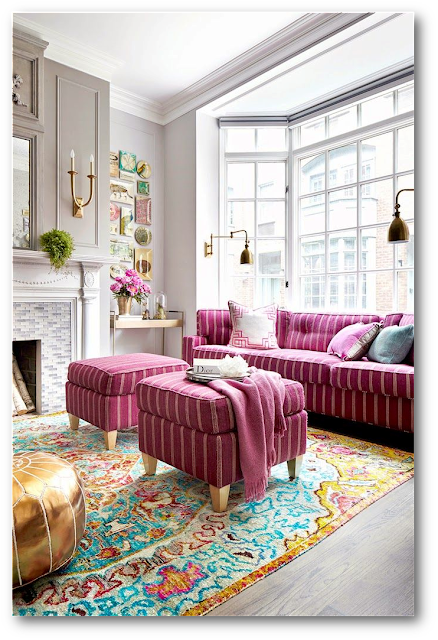 I think the French invented magenta and decorating with peonies. I love both. (Photo by Donna Dotan, room by Rob Stuart) 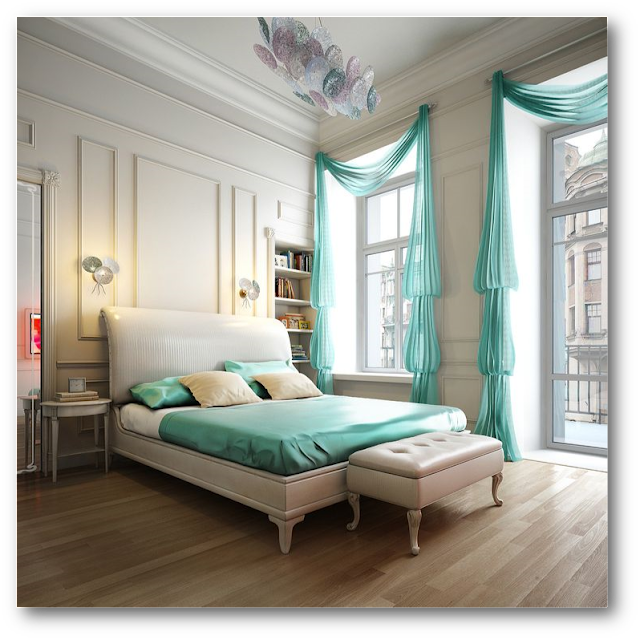 The elegant but uncluttered look of this master bedroom (found on Trend Decor) is all about me–particularly the turquoise accent of the bedding and to-die-for curtains. I just may never get out of bed! 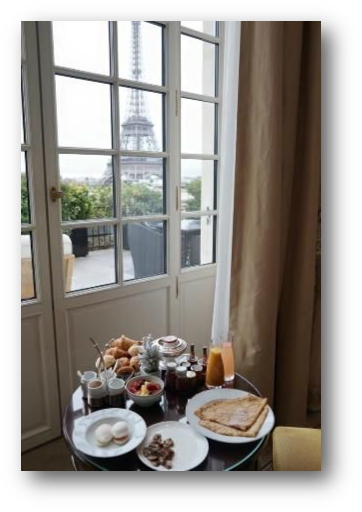 …Breakfast in bed, like Paris, is a good idea, but this cozy en suite eating area also looks enticing. It overlooks a rooftop terrace, which overlooks only the best of Parisian views. (Photo of the Shangri-La Hotel found on Tripadvisor) 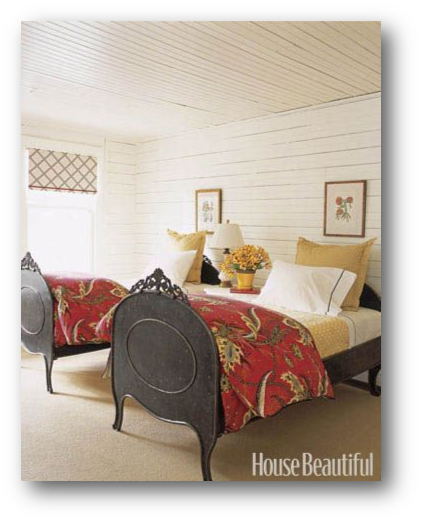 …This Tom Stringer designed room (above) for guests, and a sweet, drenched-in-peony-pinks creation by Crystal Hill (below) for the children. 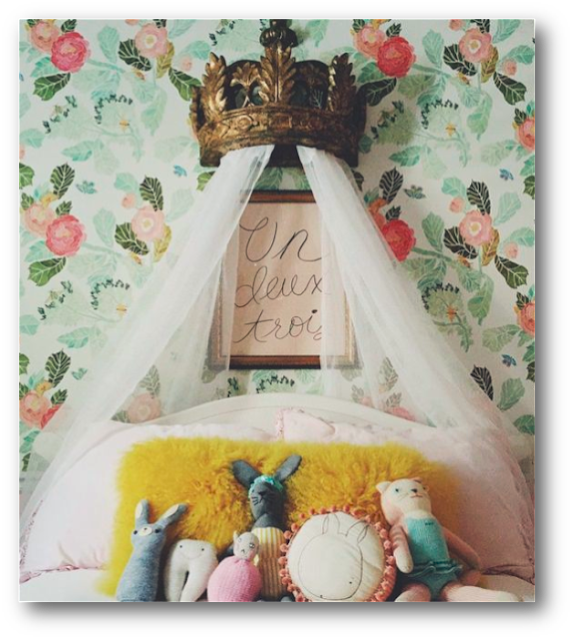 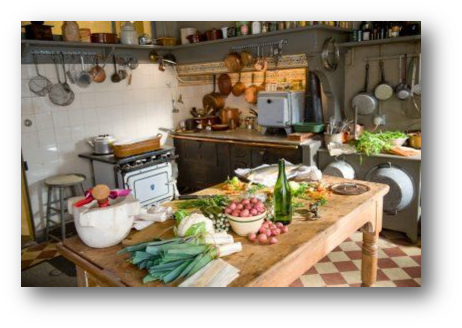 …When we aren’t eating out, my husband will cook (yes, it’s true) in this quaintly industrious kitchen (above, not coincidentally like the one Meryl Streep used in the movie Julie & Julia), and we’ll eat in this dining room (below, from Canadian House & Home)… 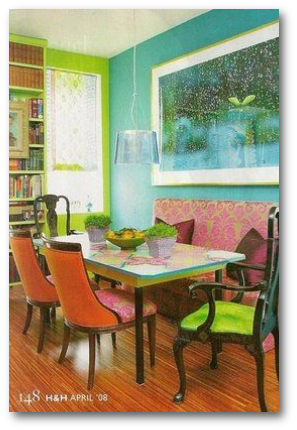 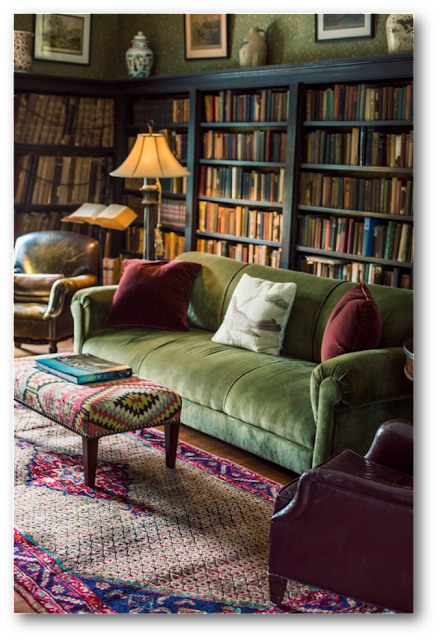 …This study will work perfectly (above, Jamie Beck of Ann Street Studio, of the Greyfield Inn, Cumberland Island, GA), as long as there’s a chaise longue or daybed nearby and a chalkboard to keep the children occupied (below, Allison Jones Design). 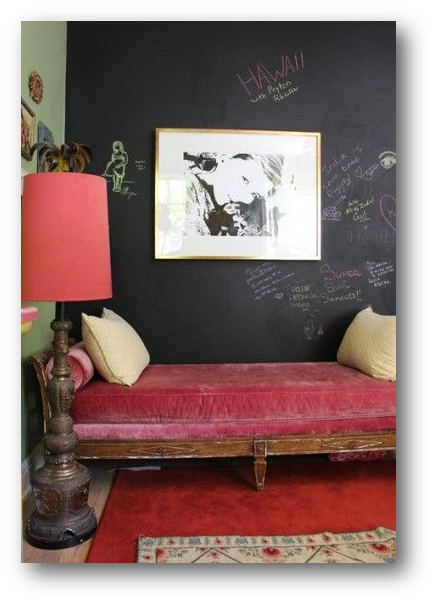 …And don’t forget these billowy, light-sifting window treatments to color my Bohemian days and nights (below, Dishfunctional Designs). 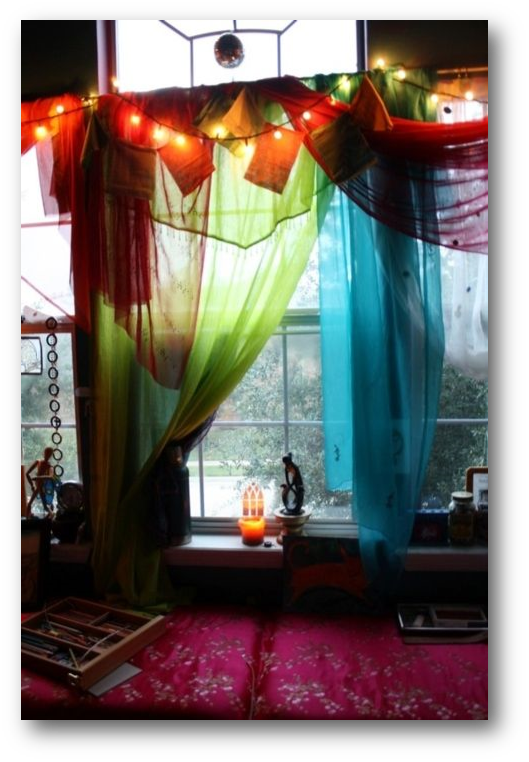 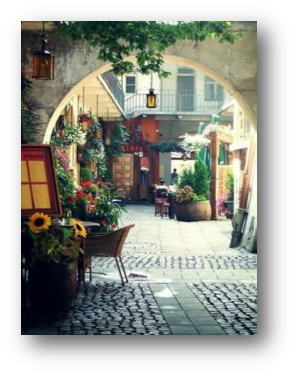 …Most important are quiet, picturesque streets (above found on Pinterest), a shop with an extensive wine and cheese selection and the freshest bread (below by Richard Frank-Huff)… 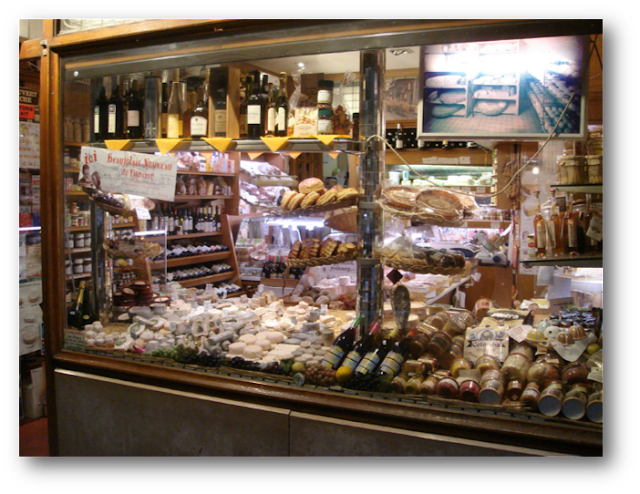 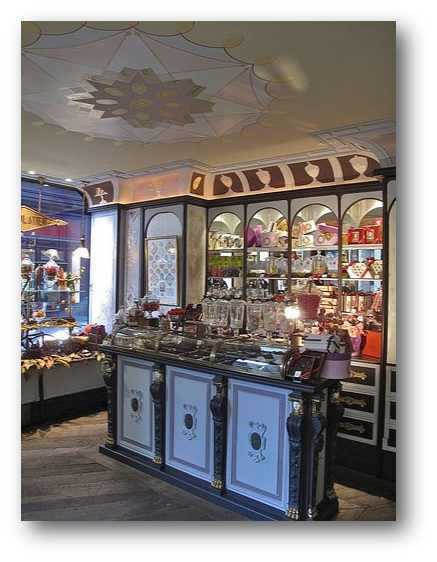 …a chocolatier like Meert (above found on Flicker), and a pastry shop the color of coral with a curvaceous greeter (below, found on Travel.Sketch.Write). 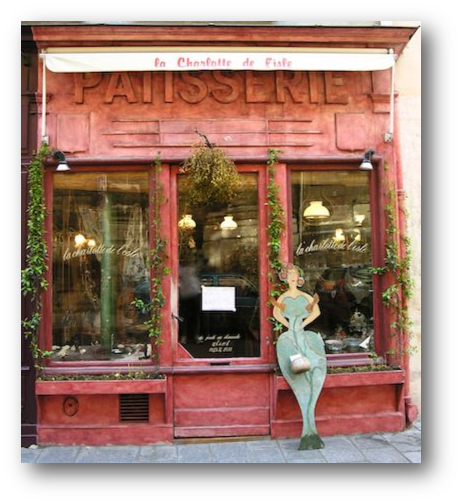 Last but certainly not least, I’d die without a book cafe nearby with a great fiction and poetry selection, as well as a killer cup of joe. Merci-Merci  will do nicely, s’il vous plaît (below, found on Indulgy). 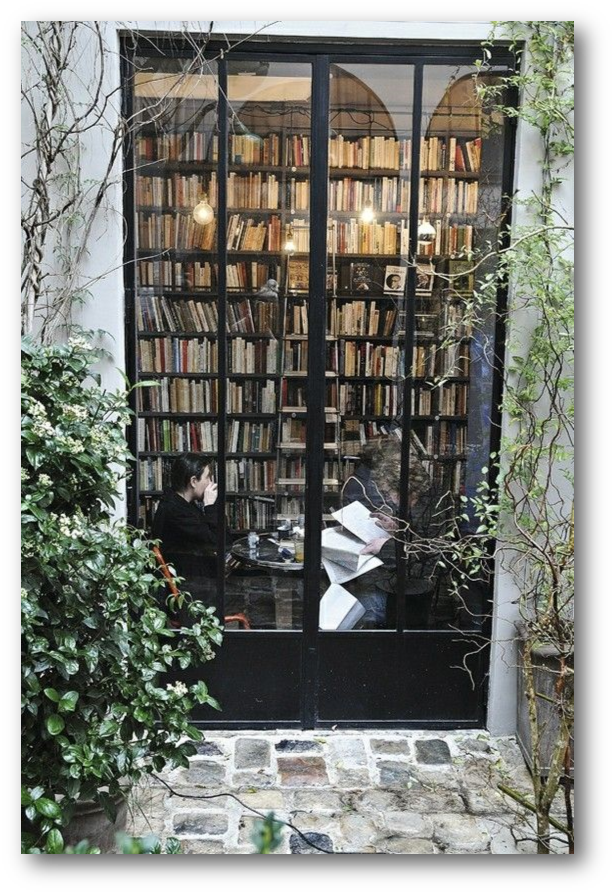 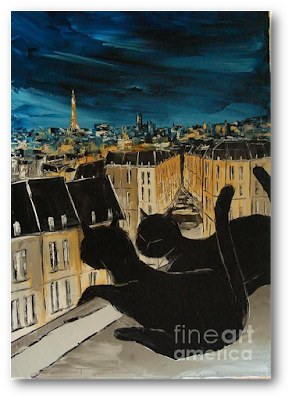 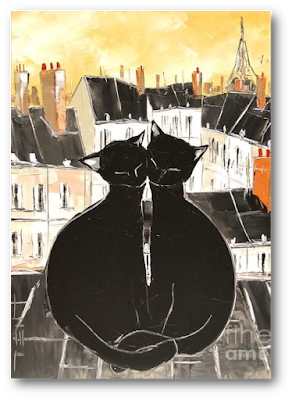 (above by Atelier De Jiel, available through Fine Art America)