Early brushes in the media with Pantone’s colors for 2016—Rose Quartz and Serenity—show a lot of baby nursery and girly-girl looks, pastel rooms with all the oomph of a cone of cotton candy. But I attended Pantone’s webinar to introduce the colors last week, and I heard something deeper happening.

There’s certainly nothing wrong with an all or mostly pink room, or blue, or all pink and blue; it’s all in the execution. But that’s not the whole story. The selection of these two colors—two in itself a first—was a tip of the hat to color psychology.

They represent a choice about choice, about what happens at the intersection of colors, about integration, about going beyond traditionally accepted norms in life as well as in fashion and interior design toward wholeness. After all, this was the year of Caitlyn Jenner and a U.S. Supreme Court decision on marriage equality.

Pantone provided eight color palettes that include the 2016 colors of the year and, at the webinar, encouraged designers and color aficionados to play around with them. What I found in searching for spaces that illustrate these individual palettes was that each looks quite different from the other, and every palette, within itself, can serve up vastly different looks. Layering of pattern and texture, bracketing of color, and variation in emphasis make for an infinite variety of richly nuanced rooms.

But it doesn’t stop there. It’s perfectly okay to mix and match among the palettes. It’s about choice and intersection, remember?

Today I’m posting about palette #8, which is one of only two in the collection containing yellow/gold and the only one containing both green and gold hues. I admit it’s my hands-down favorite look. Several of these photographs have been in my inspiration folder for an upcoming bedroom redo, and I was surprised to see how on-trend they were.

All Signs Point to Lentil Sprout

The confluence of color in the area rug establishes the palette in this eclectic bedroom, which was featured in the 2011 book Decorate by Holly Becker and Joanna Copestick. Speaking of confluence, all the angles in the rug point in, toward the center and the well-outfitted bed. The midcentury lamp and choice of artwork make the reverse-silhouetted toile duvet look quite modern, while the mix of faux fur cozies it up. Pops of Lentil Sprout in the bolster, bedskirt and chandelier show well against the other bedding.

“Moths” by Allyson Reynolds establishes the palette in this room designed by Kit Kemp, as well as the feel. It’s actually one of the guest drawing rooms at Number 16, a London hotel Kemp co-owns with her husband. Notice the rose piping on the slipper chairs and how the light makes the Sphinx-colored floor read blue. The room is ethereal, fluttering, like the moths and like our 2016 colors.

Though a port of Spain, Malaga sits a scant 81 miles across the Mediterranean from Morocco and was at one time ruled by the Moors. Malaga the color, paired with golds and blues in this Moroccan area rug, gives this room its exotic feel. Various blues dot the space, but just a little pink: a few of those cute tassels on the duvet, a bedside bouquet, and a small patch in the painting over the bed. This photo appeared in Styled by Emily Henderson. 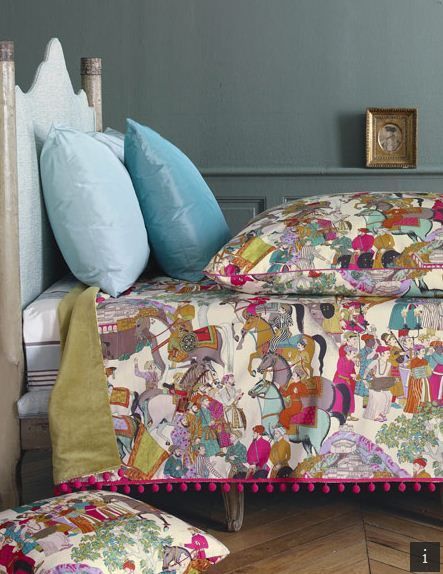 See how Sphinx and Rose Quartz side-by-side make the gray appear a bit lavender? This room is all about the print used in the coverlet and pillows, with its whimsical blue and gray horses and market scenes from an exotic, long-ago time.

Quite often finding a fabric you love is the inspiration for a room, whether it ends up in the draperies, upholstery, bedding or simply as an accent pillow. Fabric, like art, brings together interesting colorways that can then be pulled out for accents in the larger room. Here, the Serenity and Tourmaline that appear in the print provide just the right touch for the solid pillows. 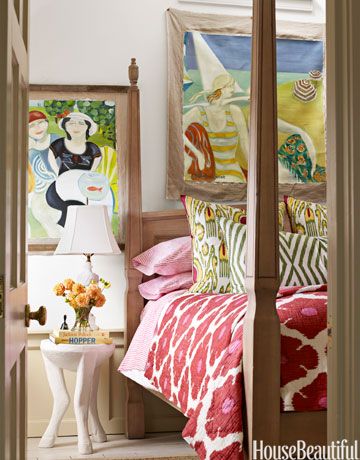 The cents of the fun, splashy quilt flowers usher in the Rose Quartz in this room, while the paintings by Marion Vinot bring on the blues. The two Euro pillows marry it with golds and greens in this Provincetown, Mass., guest bedroom of designer Ken Fulk. The beach scene absolutely ekes serenity, but all the women in Vinot’s paintings look well on the path to well-being. I love the cheerfulness of this room, including that cute little colt’s foot table serving as a nightstand.

We can’t see all of this living room, but the mirror reveals Serenity and Sphinx across the way to emphasize the importance of what’s reflected. The Malaga sofa gushes wantonly against the Lentil Sprout accent wall, don’t you think? See/read more on Design Sponge about this 1879 Victorian interior designer and stylist Karen Barlow and her husband renovated.

A place in the sun

The Rothko-esque painting whispers growth and well-being to me. I love the Maroon at its edges and in the drapery trim. Rose Quartz and Serenity are subtle—touches in the front throw pillow—but it’s enough to make me want to rest my head right there.

Spin me a Cocoon

I’ve blogged this photo once before, and it holds pride of place in an inspiration folder I’m building for my own master bedroom redo. The soft pinks and blues start in those gorgeous Audubon prints, as do all the colors used here.

The mix of textiles looks simple but is very sophisticated, so I’m still trying to sort out how to adapt the look. Only my headboard is upholstered, and it’s closer to the Cocoon swatch, as are my walls. I don’t want to change either, so I’m still thinking through how to bring the bronze/golds in.

I hope I showed examples of Rose Quartz and Serenity combinations that surprised you—in a good way, of course! Eventually I’ll get to each of the Pantone 2016 palettes. In the meantime, follow the link to take a look at them yourself, as well as all the intelligence behind Pantone’s choices, and follow my blog with Bloglovin.