Of the two 2016 colors of the year, Rose Quartz has collected the lion’s share of attention. But palette #4 gives it a hip bump to make way for Serenity and its boho blue-note pals. Specifically, this palette features:

The overall look is floral, feminine, and often playful. The colors mix well with vintage fabrics and design, as well as modern classics. Neutrals included run in the cool gray stream, from almost white Cloud Dancer to Puritan Gray to Granite Gray, which shores up the pastel bent. So no matter what the weather’s doing outside, put this palette to work inside and you’ll have springtime year-round.

I love how the vase of pink flowers enliven the paler pink flowers in the wallpaper. The Luminary Green bedskirts and headboards remind me of trees in spring when the leaf buds just begin to show. The Lupine throws folded at the foot of each bed pop against this green just like red bud trees.

This photo is from Suzanne Rheinstein’s book, Rooms for Living: A Style for Today with Things from the Past. See more photos from it at Mrs. Blandings, or purchase the book in the link below.

How interesting to make the curtain panels on each side of a window from different fabrics. The pink damask panels on the left sides echo the wallpaper, which is again echoed by the upholstery on the vintage sofa. The room reminds me so much of a May garden in full bloom that I can almost smell the flowers’ perfume. It’s shabby chic but sophisticatedly so, if that makes sense.

The room is from Pattern by Tricia Build and Elspeth Thompson. Buy it here: 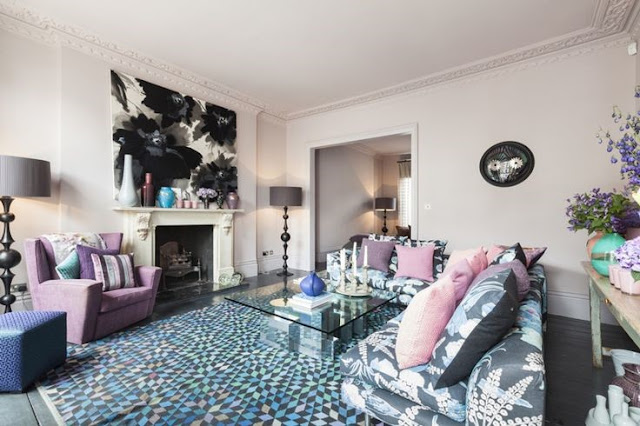 With just a smidge of pink in the pillows, this room manages to look less feminine than the others shown here, thanks to a heavy grounding in Granite Gray. I love the starkness of the black-and-white art, and that lavender chair is just too cute not to plop down in. The diamond-patterned rug and the midcentury floor lamps add to the “cool man, cool” vibe.

How could you do anything else but wake up happy if you drifted off to dreamland in this bedroom? The two-tone paint job, Moroccan-patterned rug and industrial task lamp take the girly edge off the room (just in case you need to share).

Macarons-colored accessories pop against a white sofa, cocktail table, area rug and wall. I like how the gauzy white curtains sport a pink underpanel, because nothing looks much sweeter than sun shining through pale pink. I’m also nursing a serious crush on the striped drum shade, which could easily have been what inspired the entire room.

Throw pillows do the color work against a neutral, somewhat austere backdrop to make for a cozy, romantic lounging spot. Later on this year, when 2017 colors come out, just such an arrangement will alow you to switch out those pillows, pop in colors for the new year, and have what looks and feels like a brand new peak-of-chic home.

Put it on ice

The pinks are paler and the blues are icier in this living room. Serenity shows up in the blue flowers, while the rest of the room is a panoply of Opal, Arctic Ice, Cloud Dancer, and Puritan Gray. My favorite accent? The one Luminary Green (okay, yellowish) pillow hiding out center back.

Follow this link to see all of Pantone’s 2016 palettes that use colors of the year Rose Quartz and Serenity, as well as to learn about the intelligence behind the choices.