We’re going to take a break today from boho home décor and talk about another aspect of home: neighbors. 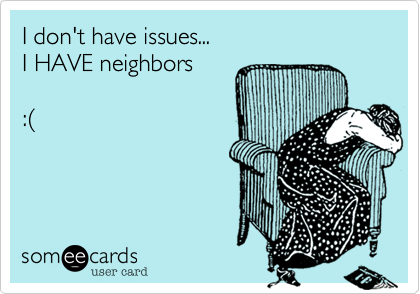 Noise travels more in an apartment than a home, but all neighbors find ways to annoy each other, regardless of the space between them. When I lived in a single-family home, one neighbor played head-banger music so loudly in his garage (door open) it shook the side wall of my house, even though there was yard enough between us for another house.

The quaking wall happened to be my home office, and I couldn’t get any work done. I wasn’t exactly sure which neighbor was at fault, so I waited for the track to change and shouted into the brief silence, “Turn it down!” Probably not the best choice, but it worked. The guilty party (and chief suspect) soon stuck his head out of his garage. He looked sheepish, apologized, and kept the decibel level down from then on.

Now I live in a one-story condo with four units per building, each resident occupying one corner. The guy to our south ground down the concrete slab in his unit before installing new flooring using some kind of scary looking rented machine, and we never heard a thing. But the neighbor to the east? We hear her every time she chops vegetables, runs her garbage disposal, and closes a cupboard door. Go figure.

There’s also a rhythmic pounding noise from time to time that I think is a hydraulic lift of some sort but really sounds like someone with OCD pounding on the wall, over and over and over.

Those who know me will wonder if this is the same neighbor with the incredibly obnoxious grandson. Yes. Yes it is. Most definitely. I wasn’t going to mention it, but you asked. Um…well, let’s move on, shall we?

Most days I ignore it all. I figure live & let live, right?

After all, even the grandson isn’t over there much. But what I’ve grown to hate is something of hers that never makes a sound yet seems to scream at me every time I get the mail: her WEEDS!! 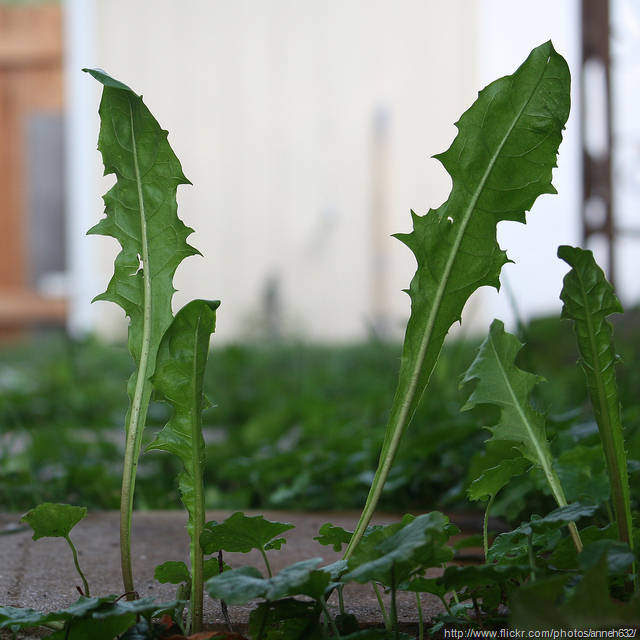 In the spirit of live and let live, when we first moved in and I saw she wasn’t going to tidy her borders, I sprayed her front-of-the-unit weeds when I did mine, and both of our properties looked better from the street. I’m a master gardener. So I know what’s weed and what isn’t. I was careful and never killed her roses or lilies.

She never complained, but she never thanked me either.

That fall I had reconstructive foot surgery. Recovery was long and difficult, and my husband Chris took over our weed treatment. Only problem? He refused to continue my charity.

So now she lets them grow until they pass the windowsills and the homeowners’ association threatens her. Then someone helps her pull them or mow them down, and for a few weeks we’re good. That’s a few weeks–two or three–out of an entire spring, summer and fall.

I think we should confront the problem.

Here are the respectable options, as I see them:

But Chris says no to all of these, too. So it’s only as a last resort that I’m left with thinking up ways to annoy her instead, if that’s even possible. This video started the old wheels turning…

Quite a few of these ideas will work next door as well as from floor-to-floor.

I found more ideas on the Internet:

We do owe her one.

Not long after we moved in, she rang our doorbell around 9 p.m. on a weekend while we watched a movie with an admittedly sonorous sound track. We do have a modest surround-sound system, but the media cabinet is not on a shared wall. Still she claimed her husband could hear “your music.” Well, it wasn’t music, but that’s beside the point. What isn’t beside the point is she’d told us on numerous occasions her husband was extremely hard of hearing. ??!!

Chris was polite, and we turned the volume down while I sat in the dark of the living room and rolled my eyes.

In the spirit of “owing her one,” I’ve suggested we turn the TV up more often since we know that bugs her. He again said no (yes, I married a Boy Scout). So my thought is next time he’s on a business trip I’ll give the loud-movie thing a try and maybe a few others.

Because what Chris doesn’t know won’t hurt him. If my neighbor sucks up the courage to ring the doorbell again at night and ask me to turn the TV down, I’ll reply, “Sure thing. As soon as you start taking care of your weeds. Deal?”

And even if I never try any of this, I’ll enjoy plotting.

What do your neighbors do that annoys you? Any creative ideas for solving the problem?