I planned to write this post on Sunnylands, the California estate near Palm Springs where President Obama met with leaders from Southeast Asian countries earlier this week. Sunnylands was the former home of Walter and Leonore Annenberg and has, since their deaths, been transformed into a retreat center known as “the western Camp David.”

The house, completed in 1966, sits on 400 acres and is a masterpiece of midcentury modern design. It was conceived by architect A. Quincy Jones, then dean of the school of architecture at UCLA. William Haines and Ted Graber designed the interiors, and that’s where I got sidetracked.

Here’s what caught my eye…

This room, just off the pool area, functioned as an informal gathering room, and lunch was often served here, both inside and out. But what really captured my attention was the upholstery—sunflowers!! (It’s also used in the draperies.)

The former U. S. ambassador to Great Britain amassed a vast art collection, a big chunk of which he donated to the Metropolitan Museum of Art upon his death (valued at $1 billion). He tried to buy a Vincent van Gogh sunflower painting in 1987 for $20 million, but it sold to a Japanese buyer for a record $40 million. Annenberg kept a poster of the painting in his office for a time afterward, stating that even if he couldn’t have the real thing, he wanted to be close to it.

Here’s the real thing Annenberg chased, or at least a photograph of it: 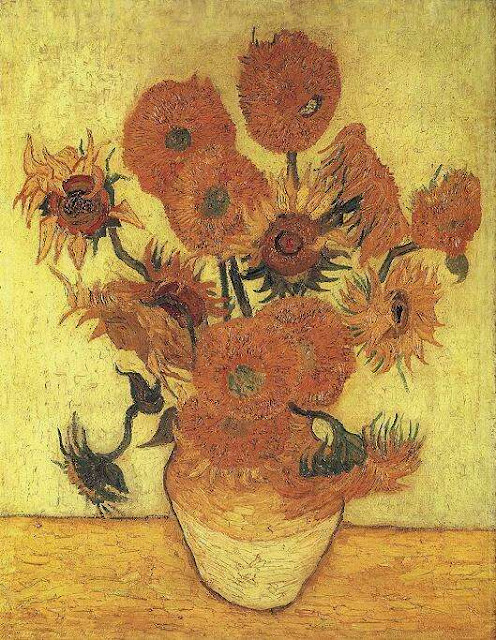 Technically it’s known “Vase of 15 Sunflowers” to differentiate it from van Gogh’s other sunflower paintings. You didn’t know there were others? You’re not alone.

Above is the series painted in 1888, in the order in which he painted them, and below is the series assigned to 1889. The one on the right (below) is a copy van Gogh made of the London painting from 1888 (above right), but with a different background. It’s also the one that Annenberg lost in a bidding war.

Van Gogh knew he was onto something with his sunflowers

He wrote to his brother Theo after completing the first one, “It is a kind of painting that rather changes in character, and takes on a richness the longer you look at it.” He later confided that the peony and the hollyhock belonged to other painters, “but the sunflower is somewhat my own.”

The artist used some of his sunflowers to decorate the room he prepared for fellow painter Paul Gauguin, who eventually joined him in Arles. Gauguin was so taken with these paintings that he painted his friend working on more (below).

Critics and other artists at the time ridiculed the sunflowers and called the use of yellow garish, but that started to change as a new century brought with it new ideas and new ways of seeing.

Writer Katherine Mansfield described one of the paintings, seen at an exhibition, as “yellow flowers—brimming with sun in a pot.” The blooms, she said, “lived with me afterwards.”

Bloomsbury critic Desmond MacCarthy, secretary of the same exhibition, would lead visitors up to the painting and say, “There!” Then, after a pause for the picture to make its impression, he would add, “Did you ever see a still-life picture with one-tenth of the energy in it that has?”

That energy is apparent in these studies van Gogh did for the larger paintings:

For van Gogh, this was the real thing…

But a mistral wind prevented him from painting them massed in the fields near Arles. In the end, like Annenberg, he found a way to be close by: He brought some sunflowers inside in a vase, and he painted those.

We’ve been bringing sunflowers inside ever since.

In fabric, like that used on this chandelier drum shade—“Sunflowers” by Galbraith & Paul:

In wall decoration, like this “Damask Sunflowers” stencil, based on a William Morris wallpaper design:

Even in custom tile mosaics. Who wouldn’t want to brush their teeth taking in this (below) every morning? It isn’t something many of us can afford, but I’m glad someone else can because it gives work to some of those aspiring van Goghs out there.

Whether it’s in our choice of materials and motifs to beautify our homes, or just a simple bunch of flowers plucked from a grocery store bin.

In doing so, we hold fast to the memory of a field of nodding yellow heads, turned to face the sun, that surprised us along a highway or a country road.

And that memory carries us through the last roars of winter. (PS: 31 days and counting until spring!)