When your BFF is unreachable…

My latest Internet obsession is Pep Talk Generator and its host site, Babe Vibes, where, if you need a lift you can get a pep talk. If one doesn’t do it, scroll to another. 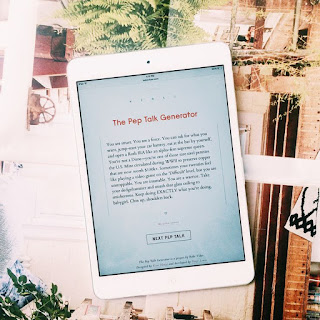 Here’s a sample, and the one I settled on for me, today, mostly because it references my obsession for house and home:

It’s ok to get thrown off, to let life roast you like a hot parked car. You’re not stuck. It’s ok to pursue your dreams with a hunger that makes people uncomfortable. It’s ok to fail at those dreams. Like, operatically fail and end up penniless, in your hometown watching House Hunters International all day. Did those dicks on House Hunters ever lay it all out like you did? All they did was demand more space for ‘entertaining’, as though that’s even a real thing. It’s ok to prioritize security. Instability — emotional, financial — isn’t what makes you creative or interesting. You’re stuck with yourself, but you’re all you need.

Babe Vibes is a collection of work by creative women that celebrates the power of calling oneself a babe and collaborating with other women. The site accepts interactive digital storytelling, weird zines and publications, lists, hard questions, ephemera, notes you forgot you wrote yourself, shower epiphanies, and anecdotes or stories about friendship with women.

In addition to Pep Talks, current projects include:

So take a look around, read a few posts, contribute if you like. But above all, you-babe-you, get that pep talk and show the world who’s boss!

Speaking of my obsessions: How about this pillow?

Everybody’s hot for the “Mermaid Pillow” since a Texas TV reporter stumbled across one in a furniture store and featured it in a broadcast. Made of a reversible sequin material, it changes color when something brushes across it—your hand, your finger, another pillow, your guest’s butt.

See for yourself what you can do with it…

Leave it all one color or another, monogrammed, geometric, abstract. Change it out daily, weekly, or whenever your fingers desire. The possibilities are endless, which must be why the furniture store thinks it can get $149.99 a pop. I found the same thing at the Mermaid Pillow Etsy Store in three sizes and nine color combinations for $39.99 to $59.99 plus shipping.

This certainly casts a new light on MY pillow woes. I envision people fighting over the Mermaid Pillow at family gatherings—maybe even taking it with them to the grocery store, where they block the aisle or run their carts into other shoppers because they’re busy with their pillows.

Me? I’ll be home alone stroking my yellow lamb cushion into oblivion, for once with no apologies or guilt.

Call this alarm clock ‘The Enforcer’

Enter the Ruggie: an alarm clock inside a pressure-sensitive rug that only shuts off after you stand on it for three seconds. The Ruggie is part alarm clock, part mat—a soft, memory foam “smart rug” with built-in speakers and sensors. 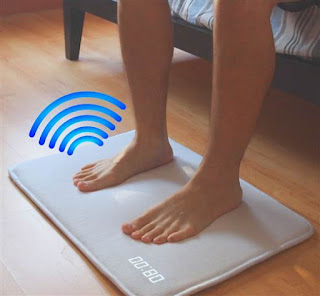 Not only will it force you to get out of bed and on your feet, it also makes funny sounds and delivers motivational quotes to help kickstart your day. An LED display shows the time when you step on it and also acts as a night light, shutting off after 20 seconds.

Winson Tam, its creator, said he came up with the idea after finding he was struggling to get up in the morning. He launched his Ruggie on Kickstarter Jan. 3 and hit his goal of $36,113 within a week. Support at the basic level of $59 US is sold out, but you can still get in at the $79 pledge level and receive your very own Ruggie as part of the deal come September.

The product is expected to sell for $99, which for me would be money wasted because I’d pommel it to death for nagging me awake with silly platitudes. I would like to know, though, Where was this product when my daughter still lived at home? Waking her was like waking the dead. No wait, that might have been easier.

Gone are the days of my own father giving me one chance for my feet to hit the floor before he hurled the expletives, which got me up and marching snap-snap. If only I’d recorded him…

A booth at the Consumer Electronics Show is stopping traffic with its video of a machine that can fold clothes. But in the absence of a prototype—or even see-through doors to show the technology at work—we’re all left wondering how far along the technology really is. 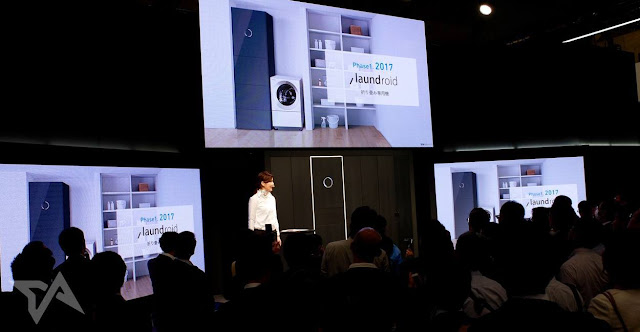 “Laundroid” from Seven Dreamers reportedly uses advanced image analysis and a suite of robotic tools to fold laundry inserted into the machine. Laundroid then closes its door and performs its magic. You’re left with clean and wrinkle-free clothing, folded and ready to put away.

Maybe, though the “machine” shown looks a lot like a magician’s box into which the skimpily clad assistant “disappears.”

Seven Dreamers claims it will automate laundry by 2019, using the Laundroid to wash, dry and fold clothes, all with minimal interaction from humans.  If the folding Laundroid ever does see the light of day, it won’t be until 2017 at the earliest, and initial plans are to release it to hotels, hospitals and nursing homes first. No price has been set, but that should tell individual consumers all they need to know: Only institutions will be able to afford it.

I, for one, don’t mind folding clean, warm-from-the-dryer clothes. It’s comforting somehow and relaxes me. But I would kill for a machine to iron them and put them away. When’s somebody going to work on that one?

Learn more at The Next Web. 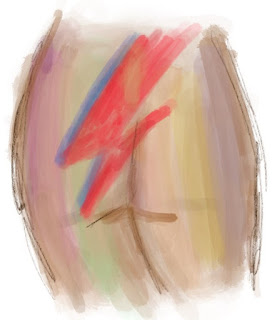 Charles Vestal made a New Year’s resolution to draw at least one butt every day for a year, and he’s publishing said drawings on Tumblr, Instagram and Twitter so you can follow along.

No word on why he chose to focus on butts, but it definitely got everyone’s attention.

This Jan. 11 entry (left) is my favorite so far. I love the mystery of what the red lightning bolt might represent (smirk).

Maybe at year-end Vestal will put together a poster of all the butts and offer it for sale, a la those doors of a certain city posters we’ve all seen. I’d have to see the finished product, but I’m thinking it would be just the ticket for one of my bathrooms.

Anyone who knows me knows I think New Year’s resolutions are a waste of time and column inches, butt this cheeky project is one I think I can really get behind. ;->

File it under: No light at the end of this tunnel 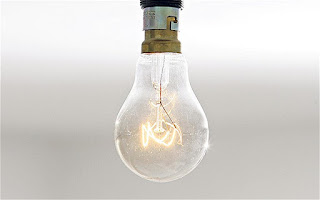 Do you have all your light fixtures converted to LED bulbs yet? Good. Now it’s time for home improvement stores to send you back to the incandescent aisle for an even better, old-school bulb.

Researchers at MIT are busy perfecting reengineered incandescent bulbs that don’t give off so much heat, and it’s promising. They’ve surrounded the filament with a special crystal structure in the glass so energy typically lost in heat can be bounced back and recycled while still allowing light through.

Traditional incandescents are only about 5 percent efficient, with 95 percent of energy lost to the atmosphere. In comparison, LED or florescent bulbs manage about 14 percent efficiency. Scientists believe this new bulb could reach efficiency levels of 40 percent and show colors far more accurately.

Research is still in the proof-of-concept phase, no word yet on how much such a bulb would sell for, and nothing reported on how long it would last. I’m guessing much, much longer than the next generation of a still-more efficient bulb that outlaws its predecessor.

Where cats do more than read, they write about it

Animal and garden photographer Walter Chandoha has a tongue-in-cheek website that allows his own cats, Uni and Chloe Zola Volcano, to speak their minds and parade their literary prowess.

When not grooming themselves, stealing pens and pencils, or destroying upholstery (oh wait, that’s Maisie-cat), the pair is engaged in an ongoing series of conversations with the 21st century’s most prominent writers, artists, and intellectuals on Shit My Cats Read.

It claims to be the Internet’s only website dedicated to kitten-based literary scholarship, and a disclaimer assures, “To allay any silly human suspicions, know that all interviews are authentic and conducted via email.” Follow the link to access the full archive with titles to make any cat-lover tut-tut with delight.

I wonder how fast Chloe and Uni can type? And how long before Chandoha puts them behind the camera?