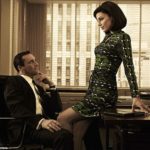 Part 2 of my office/guest room refresh picks up where we left off Monday, with planning for the refresh of my husband Chris’ office–a.k.a. the Lawson guest bedroom.

If you recall, my interpretation of the menswear style is inspired by the midcentury modern aesthetic as seen on the Mad Men television series: Don Draper’s (Jon Hamm) savvy suits accented by retro prints in the outfits of the women who surround him, which also remind me of fun neckties.

What’s a Mad Man without his arm candy, am I right? 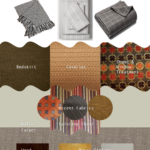 Here’s the mood board for the room, remember? To read/see more about the inspiration, check out my earlier post on menswear boho style, as well as my previous post, For My Valentine: ‘Mad Men’ Boho Chic – 1.

I admit to a bit of embarrassment showing the “before” shots of this room. but a girl’s gotta start somewhere. The drearier the beginning, the bigger the wow at the end, I always say, so onward and upward… 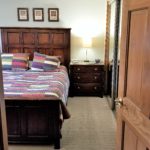 This bed and nightstand used to be in our master bedroom before we upgraded to a king-sized bed when we moved here. A matching armoire remains in use in the master.

We bought this set of furniture the first Christmas after we were married, so it’s seen 28 years of use, and that shows in spots. 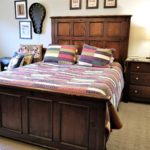 In the six years we’ve lived in our condo, I’ve agonized over what to do with this room. The bed alone has had six different patterned quilts plus a duvet cover, none of which pleased me. Chris, of course, thought all were “fine.” 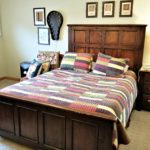 The first two quilts were stop-gaps–extras I already owned–while I searched for “the perfect menswear bedding set.” That menswear theme seemed right from the get-go, but the black pinstriped duvet and shams I fell in love with and purchased (from a nonreturnable source, unfortunately) weren’t. They looked not merely off but SCARY. Coupled with the massive, dark-brown head- and foot-boards, the bed sucked up all the light in the room, as if anyone who risked a little shut-eye there might be sucked into a black hole, never to be seen again in this galaxy. 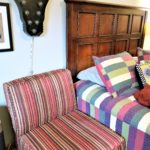 Chris added the chair around quilt number five, I recall, because it was inexpensive and functional. Next try after that I settled for the quilt you see here and committed to an off-the-shelf purple bedskirt and window valance (signs I’d given in and up)

It wasn’t an expensive buy, and since it faded the first time I washed it, I’ve been hoping for a legitimate reason to get rid of it ever since. When I washed it recently and found a small hole, I was at first gleeful. But then reality set in, and I began to dread trying to find just the right bedding yet again and STILL coming up short,

This time, though, I think I may have a winner. (More to come!)

Beyond the bedraggled bed

I bought Chris these two initial prints and the lightbulb marquee as a 25th anniversary gift (both refer to his business) nearly four years ago, though I’ve never been satisifed with how they’re hung–no surprise there, right? Along the way I collected other items I planned to use in a larger gallery wall arrangement that never materialized. A white board hangs on an adjoining wall, across the chasm of a dead and useless corner. 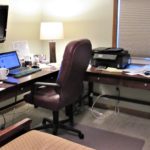 The rest of the room I simply let Chris have his way with. It is, after all, an office 99.999% of the time and where he spends the lion’s share of his life. I did get him to replace his old kitchen table desk with these two actual desks. 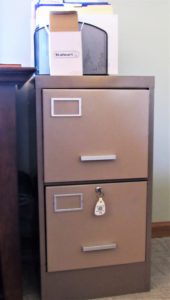 To the right of the two desks is a file cabinet he inherited (like the condo, complete with mess) from his mother. 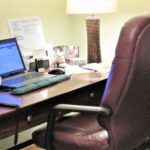 The resin-rattan desk lamp was a cast-off from our daughter. Believe me, you know without a doubt you need a design intervention when your husband dumpster-dives your adult child’s cast-offs. 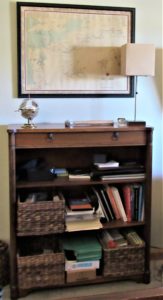 The vintage 1940s bookcase is an inheritance of mine, as is the map hanging over it. When my dad’s older brother and his wife divorced, my newlywed parents bought it from them. They then passed it on to me  as a starter piece when I got my own place.

The map is an original souvenir troop map of the VII Corps, the unit to which my dad was attached in WWII. All soldiers who served in the VII Corps received a map like this after the war. My dad lost his somewhere along the way, but one of his buddies, who didn’t have children, passed his on to me.

Specifically, dad was an anti-aircraft automatic weapons gunner on a half-track in the 474th AAA Battalion, which landed on Utah Beach in the first wave of D-Day, June 6, 1944. You can read more about what he experienced on the website I created from interviews with him, pictures he took, and research I gathered, No Major Goofup.

That wraps up the ‘before’ tour, now into the breach

Here’s that mood board/plan again so you can remember where we’re headed. 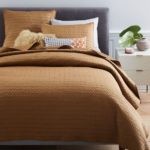 I chose the Gramercy Coverlet from West Elm in Antique Brass as the bedding foundation. I liked that it was a complex gold, with slight orange and green undertones. It’s machine washable, cotton filled, and the cotton polyester exterior has a lovely sheen and hand to it.

All of which meant it paired beautifully with my inspiration and primary accent fabric, Nexus Spice. This is where I start all my makeovers, with a fabric I love. This one reminded me of a print you might find in a necktie in a smaller-sized print, and it was retro to boot–a double win!

Over the weekend I kicked it in gear and sewed up flanged-edge envelope-back shams (Maisie-Cat helped!), 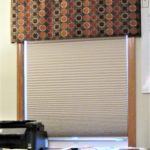 a simple, tailored window treatment (both on Saturday) with the Umbra Loft curtain rod in silver for smooth wraparound corners, 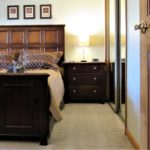 and finally the bedskirt on Sunday. I reused the old bedskirt underlayment, removing the ruffle portions and sewing on my new material. Because the footboard on this bed goes almost to the floor, I didn’t bother adding skirt on the bottom. I’ve made a few bedskirts for this particular bed and, trust me, it hangs better this way.

The fabric is called Texture Military Green, and I got EXACTLY enough in an $8 remnant I discovered browsing for the Nexus Spice. I found both fabrics in The Fabric & Wallpaper Company‘s ebay store but purchased directly from their website since they’d sent me a coupon with the Nexus Spice sample ordered previously. 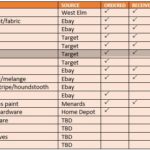 Lots accomplished, but lots still to do. What’s next, you ask? Well, tune in next Monday and find out. I’ll give you a clue: It involves spray paint, screws in studs, more fabric, starch, and lots of styling. First up I’ll wrassle that dead corner!

In the meantime, if you want more… 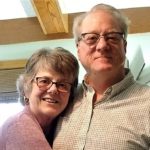