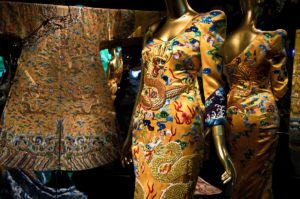 If you’ll be in the Big Apple between now and Sept. 7, don’t miss “China: Through the Looking Glass” at the Metropolitan Museum of Art. The exhibit features more than 140 examples of haute couture and avant-garde ready-to-wear fashion alongside Chinese costumes, paintings, porcelains and other art.

Here’s a peek at the exhibit, then we’ll take one step more along the design trail to see how these artistic creations can also inspire room decor. 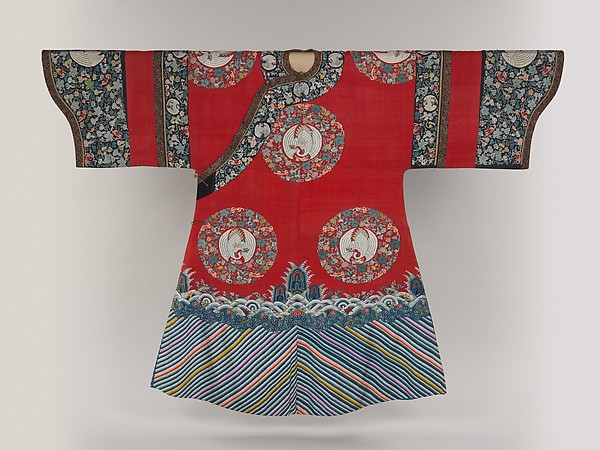 THE INSPIRATION…Detail of a court robe (above) from the 19th century, Qing dynasty (1644-1911), silk and metallic-thread tapestry (kesi) with painted details.

THE INSPIRED FASHION…The above evening dress by Tom Ford for Yves Saint Laurent was part of his fall-winter 2004-05 collection. 20th century Peking opera singer Mei LanFang inspired the dress below by John Galliano for House of Dior as part of his spring 2003 collection.

THE INSPIRED DECOR…The use of “lacquer red” channels the most prominent color of the garments into the room below. Pops of yellow and black, playful patterns and bold stripes on the wall bring in the theatrical feel of the garments. A gilded mirror calls to mind the shimmery banding at the hem of the Galliano dress. Room design by Nick Olsen, found on One Kings Lane.

THE INSPIRATION…Cobalt blue-and-white porcelain originated in China and still charms us. This jar with dragon design is from the early 15th century, Ming dynasty (1368-1644), and is an example of Jingdezhen ware.

THE INSPIRED FASHION…This Roberto Cavalli-designed Chinoiserie evening dress (above) incorporates some of the Italian influences of its creator. In fact, many of the garden motifs we associate with China were first popularized in the West as patterns on imported or domestic-imitation china and wallpaper. The blue-and-white bouquet gown (below) by Valentino is another example and was part of his fall 1968 collection.

THE INSPIRED DECOR…Chinese porcelain never goes out of style and adds a traditional-leaning elegance to the entryway below. Blue-and-white pieces have the biggest impact when used in groupings, as in the vases on the table and the garden stools positioned beneath. Dreamy wallpaper acts as yet another nod to Eastern-influenced design. Design by Ashley Whittaker, found on One Kings Lane.

Revel in the energy of yellow…

THE INSPIRATION…The semi-formal silk robe above was designed for the Xuantong Emperor, Pu Yi, circa 1910. Yellow represents earth in Chinese culture and is considered the most prestigious color, worn historically by the emperors. It also often decorated palaces, altars and temples, and hence was worn as well by Buddhist monks.

THE INSPIRED FASHION…The stunning beaded evening dress above, based on the emperor’s robe, was part of Tom Ford‘s collection for Yves Saint Laurent in autumn 2004. But the cinematic stereotype of the Chinese dragon lady in a tight-fitting sheath has haunted Hollywood since the 1930s in movies like The Bitter Tea of General Yen and Daughter of the Dragon.

THE INSPIRED DECOR…The Chinese saying that “yellow generates yin and yang” implies it’s the center of everything and will bring creative energy to your decor, just as it does in the walls and draperies of the above room. A Ming-style trunk (by the far window) and a glazed garden stool (foreground), both used as side tables, lend a subtle but unmistakably Eastern flair.