I never learned to knit or to crochet, but this past weekend I learned the comfort of working with yarn by making a simple yarn wall-hanging for our master bedroom. I also got to check a couple decor chores off my to-do list and close some of those tabs open in my brain that I wrote about last week.

Several people tried to teach me both knitting and crochet when I was younger, but I’m left-handed and they were right-handed, and the instructions never flip-flopped in a way that made learning easy or fun for me. (Thanks for trying Cathy and Martha, and I hope you found other students who were better learners.)

This project only requires cutting yarn, making a simple looped knot, and braiding (optional, of course). The most challenging part is deciding what yarn to include and in what order, but that’s the kind of task I enjoy mulling over. It’s easy yet contemplative work. The yarn is soft and the colors are soothing. In that respect, it reminded me a little of gardening, just not as hard on the knees.

I drew the color palette for the yarn I chose from Anthropologie’s Open Market Throw, which we added to our master bedroom earlier this year.

Seems like I always buy way more than I need—the yarn aisles at Joann’s are my new favorite place to go for a color and texture fix!—but these are the yarns I ended up using, as well as what was left when I finished. The tutorials I read suggested mixing different weights of yarn to add to the texture of the finished piece, so that’s what I did.

I bought two packs of Lion brand Wool-Ease Thick & Quick in oatmeal (bottom) because it was to be my base. I wanted something chunky and natural looking, and this had flecks of dark brown/black throughout, which gave it a rustic appeal. Each of these packs was 106 yards (97 meters), and, as you can see, I used all of one pack and most of the other.

I bought just one pack of the other yarns and used only a portion of each. Color came from the two yarns on the right—one a lighter-weight ombre mix of pink, peach, lavender, and yellow. The other was a raspberry/tan twist. The remaining four yarns brought in a bit of variation in color, but mostly different textures.

It’s hard to see their neutral colors well in this photo, but the three at the upper left are mostly shades of off-white through light brown. The one at the left also contains fringed flecks of light gray. The middle yarn is the same brand/grade as the oatmeal but a darker color. And the one to its right is a lighter weight but similar color, with tiny flecks of green, orange, yellow and red thrown in. The fuzzier ball in the middle left is a sari thread yarn with multi-colors on an off-white base. I used it as an accent.

As a hanger I used a half-inch in diameter wood dowel rod cut to 27 inches to fit my space. I came in three inches on each side and drilled a hole straight through the center with an 1/8-inch drill bit. Then I used a darning needle to thread a strand of the oatmeal yarn through each hole and create a hanging cord. I tied a double knot to stabilize it where I wanted it and cut the excess off.

Instead of a dowel rod you could use a branch, a metal ring or wreath base, or even a wooden coat-hanger.

In retrospect, I should have left the end of this as long as my other lengths, and it would have blended into my finished piece. That’s a tip so you don’t make the same mistake. If I ever get in the mood, I may do that part over.

I previously had a watercolor painting hanging in the space where I wanted to place this piece, so I just hung the dowel rod in place to work to add the yarn. I thought that would give me a better idea of the scale I wanted and the color distribution within the room.

I had no plan when I started—only inspiration

I’ve been collecting photos of yarn wall-hangings on my Crafty Stuff Pinterest board for several months. Some have tutorials, others don’t, but all use the basic looped-knot approach. Here are some of my favorites:

I love the simplicity and restfulness of this one but thought mine needed more color. I did, however, buy some wood beads, just in case I decided my finished piece needed them. I’m sure I’ll use them in a future project. 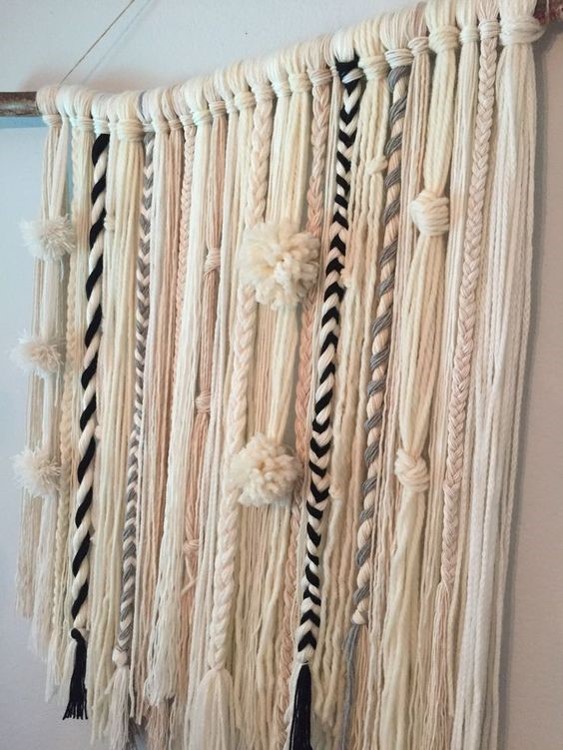 I also LOVE the various techniques blended together in this one—braids, twists, pompons, knots, etc.—but decided to save it for a future effort.

In the end, these three influenced me the most—the left one for its colorful palette, the middle one for the braiding, and the right one for the bottom cut pattern.

Cutting and knotting and cutting some more

You can wrap the yarn around a piece of cardboard to measure out several lengths of yarn at once. Since I planned my hanging to be rather large, this would have been cumbersome, so I simply measured an approximate yard from the tip of my nose to my fingertips.

To make the looped knot, fold your cut length of yarn in half to make a loop as shown at left, then tuck the loop under the dowel rod as shown at right.

Next, tuck the loose ends through the loop (left) and pull the two sides until the loop is tight around the dowel rod (right).

The only difference from the photos is that in knotting your hanging you use more lengths of yarn together to make one knot. I used a minimum of five lengths for each section, but you may want to use more or less, depending on the weight of your yarn and on how chunky and/or full you want your hanging.

And if you don’t want the loops to show on the front, simply reverse this process pictured and start with the loop under the dowel rod. This allows for a sleeker, less chunky top. If you look at some of the examples on my Pinterest board, you’ll see it done both ways.

As I said, I didn’t really know exactly what I wanted, so I started by making some sections in the oatmeal yarn and distributing them at either side and in the middle. Then I worked from side to side, adding sections in different yarns. I didn’t take pictures because I wasn’t sure I’d leave it that way.

At one point I asked my husband Chris whether it needed more color, which he thought it did, so I redid some sections. When I had the dowel rod covered I decided to make it fuller with some additional sections of oatmeal for definition.

Here’s what it looked like when I finished looping the yarn and cutting the center section even. As you can see, I didn’t get consistent lengths all the way through. It’s not only my measuring skills at fault. Some yarns are springy while others ripple, and I probably didn’t extend each length tight as I measured. But this is an extremely forgiving project, so you can even up all your ends AT the end.

I decided to braid four sections as well, leaving the colored braids longer than the neutral ones.

After further consultation with Chris, I decided to cut mine similar to this one.

I used a level to help get the opposing side even, but I imagine I’ll be snipping and trimming it for a while.

…And it adds texture to the room.

While we’re in the master bedroom…

I took another stab at styling that end table that sits below our TV, and I’m more pleased with the results this go-round.

I had books on the middle tier before and decided to add them to the bottom tier as well. The table surface is so large that accessorizing the entire bottom sans books looked too busy. I used a small tray to corral the TV and sound system remotes on top of the books on the middle tier, then I added just a few trinkets at the front of each level.

I’m happy with it for now and LOVED checking 2 to-dos off my list!