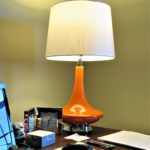 I give accessories the credit for bringing my husband Chris on board with redecoration of his office space, which also serves as our guest room. And in particular, I’m paying homage to the bright orange, retro-styled lamp I found for him at Wayfair. 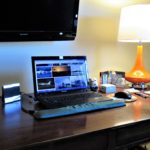 It arrived last Friday, and Chris hasn’t been the same since. I thought he’d scold me for spending the money when he had a perfectly serviceable lamp (rescued from our adult daughter’s discards no less). But no, he fell so in love with this lamp at first sight that he tidied up his desk area and restyled a few things himself, rearranging PC peripherals, detangling cords, framing an item and hanging it and another. (Those last two after consulting with me!)

This post updates you on what together we accomplished in this room that didn’t fit into the last post (in which you got a first look at this dynamite lamp). It also gives you a sneak peek at two make-overs planned for furniture pieces in the room. Finally, since it’s time for another Shop & Rock Friday, you can shop the project in a linked gallery that rounds up items I used in this redo, all to a specially selected tune you’ll find in the “If you want more…” section at the end of the post.

A bookcase of memories & dreams 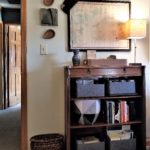 You may have noticed in Wednesday’s post I’d done some reorganizing and restyling on the 1930-40s era bookcase Chris uses for office-supply storage. I pointed out then the ceramic art we added on the left, while the lamp and the troop map of my dad’s World War II unit were there before the redo.

I switched out the shelf baskets Chris was using–which are actually extras that go with the bookshelves in MY office and didn’t work as well here. I replaced them with the IKEA Besta Box (right) in charcoal gray felt–two on the top shelf and two more on the bottom. Very menswear chic!!

On the middle shelf I added a pair of vintage brass and leather bookends found on ebay for just $2.99 (!!) to corral books, extra notebooks, and CDs. You can see what a great job they do in the photo on the left and take an up-close-and-personal look in the stand-alone shot on the right.

Finally, I added the felt-paneled Grey Quartz Cube Bin from Land of Nod (left) on that same shelf and used it to store giveaway pens (right) Chris promotes his business with. That’s one HEAVY bin, believe me. But luckily it’s flexible and doesn’t need moved to get into. This one storage solution alone cleared two cardboard boxes from the closet in this room. 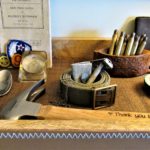 To top off the bookcase, we went through some family memorabilia and picked out items for a tray vignette of keepsakes, mostly from World War II. The one exception is the hammer near the front of the tray, which our daughter gave Chris two Christmases ago. The handle is inscribed, “Thank you for helping me build my life.” We felt it fit with how we felt about our dads, too, and their contributions to the war effort.

My dad, TEC 5 Jack Clark, was an anti-aircraft/automatic weapons gunner on a halftrack and landed on Utah Beach in the first wave of D-Day. He also participated in the Battle of the Bulge and the liberation of Nordhausen. Chris’ dad, TEC Sgt. Beauford Lawson, was an aircraft test mechanic assigned to Wright-Patterson Air Force Base near Dayton, Ohio. He had the responsibility of testing the Enola Gay before its historic flight over Hiroshima, Japan. Though he hadn’t been told anything about the plane’s mission, cargo or where it was headed, based on the security in place he knew it must be big. What he did know was his unit would soon ship out to the Pacific, but it never happened because Japan surrendered a few days later. 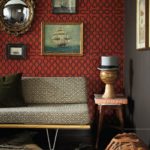 Remember this inspiration photo from the first post in this series? Remember how I loved the hat on the stand and said when I started this project I had a hat I planned to use as well? That I just needed a stand of some sort for it?

Well, this is the hat I was referencing–my father-in-law’s wool army cap, in perfect condition and with one of his unit emblems tucked in the brim. I tried a few different items out as perches for it, then decided it looked best positioned on the corner of the troop map. Chris liked it there, too. 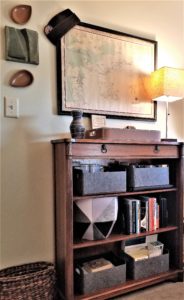 Now each time we both walk past this area–and that happens many times every day–we think of our dads and how proud we are of them. And how much we miss them both, of course. Jack passed away in 2013, but Beau has been sadly missed since 1996.

Snapping that bedskirt and chair to attention 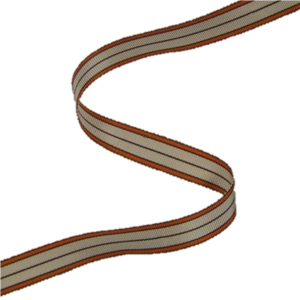 The vintage grosgrain ribbon I ordered to trim the bedskirt arrived Saturday, so Sunday I went to the fabric store to buy a roll of Stitch Witchery to apply it. The ribbon is 5/8 inch, so I bought the same width of Stitch Witchery in the super-weight adhesive.

Sewing the ribbon would have marred its look and eventually caused it to curl. I don’t use adhesive products often, but a bedskirt seemed a good use for it, as it doesn’t get much wear or need frequent laundering. An  invisible adhesive has the added benefit of covering the hemstitch line.

That hemline also served as a guide in placing the ribbon, which made the project a snap: 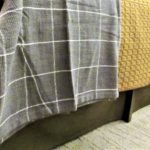 Remember how the bedskirt looked untrimmed? 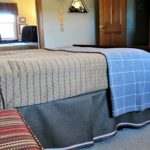 Voila! Here’s how it looks now–finished and tailored, but with an added military zip. Ironing the blanket at the foot and tucking in the quilt helped spiff things up, too. We are now ready for inspection: Ten-HUT!! 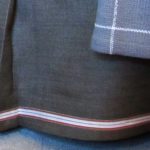 Yes, after consultation with the base commander (Chris) I settled on just one row of embellishment, proving I did allow him to make a FEW decisions about the room, LOL!

Just a note: When using iron-on adhesives, you may need to re-fuse some areas. I had a few spots that needed re-fusing, most of which I caught before putting the skirt back on the bed. But even the one I discovered after was easy to fix with the iron, pressing cloth, and a stool as a base for the fabric. 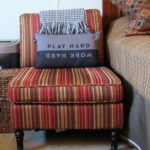 Next to the bed (and bedskirt) is the striped legacy chair, remember? I already showed it to you with the houndstooth throw added, but I finally found the perfect accent lumbar pillow for it. 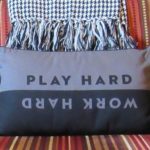 I first saw this pillow on the Target website, where it sold out. And even though I had the manufacturer’s information, I couldn’t find anyone else stocking it. That is, until I searched ebay, where I found several new and used options. I was so tickled to find it new with tags AND for a few dollars less than Target’s original retail price.

It really is true what ebay uses as its slogan, “Seriously. We have everything.” (PS: I keep the “Play Hard” message on the pillow upright because that seems to be the one Chris has the most trouble remembering. Hmmm…)

An unremarkable utilitarian file cabinet and a nightstand that’s seen better days are the two lackluster elements of this room with major make-overs in their futures.

These are the inspiration photos for the file cabinet make-over:

We’ll add tapered midcentury legs, similar to the ones shown in the photo on the left. However, ours will be shorter–3.5 inches–and we plan to install them straight up and down rather than at an angle. As for finish, the photo on the right is my inspiration.

Rustoleum Aged Brass Matte is my finish of choice, but I plan to leave all the cabinet fittings silver. I haven’t decided whether the wood part of the leg will go brass or silver like its end cap and foot. Probably silver. And currently the frame and drawers are slightly different shades of tan; perhaps I should mix matte and shiny finishes in a similar fashion? What do you think? Please weigh in via the comments section.

My inspiration for the nightstand is a bit more spectacular. It’s a fabric upholstered dresser trimmed in leather and brass and retails for $3,950!! Way beyond my budget AND my DIY skills, sadly.

So while the first dresser has the menswear LOOK I’m aiming for, this second dresser better reflects what I plan to tackle. Rather than painting the drawer fronts, I will cover them in fabric.

I wasn’t sure about the fabric so ordered two variations on a black-and-white houndstooth print. I already used houndstooth in the throw on the chair and like how it adds to the room’s menswear look. The print on the top left is a traditional houndstooth, while the one on the right is a houndstooth plaid. I may combine them somehow–alternating drawers or making the one I don’t use on the drawers into a mat to cover the top.

I also have five yards of ribbon left over from the bedskirt that may show up on this project. The hardware, however, I will leave as is because I like its retro feel. I had extras of these knobs, and used them to upgrade the four desk drawers on Chris’ two desks (see photo 2 in this post).

I’ll wait to style both the nightstand and file cabinet after their respective make-overs. However, I have done a bit of reorganizing with the file cabinet already. Not inside it, mind you–what a scary project that would be!

But I traded in Chris’ open, tiered file sorter for this lidded file box, which looks neat and tidy open or closed, especially filled with these fun file folders I got on clearance at Staples. Bowties and martinis are the perfect Mad Men motif!

And remember the triangle and hexagon shelves I added on the wall between the closet and hallway doors? I think I finally have them the way I want them. 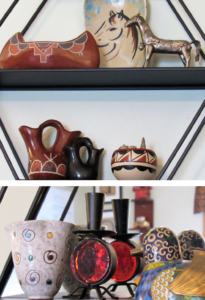 Take a closer look at what they hold, from the top down:

Whew! I hardly have any energy left to shop! How ’bout you? I did say hardly, and it was merely an expression, sooooooooooo…

Do What You Love Print

Round Tapered Leg 3.5 in

Remember that behind every good man is a woman (or man) who can leap sofas and serve cocktails in a single bound! So practice those skills already!

Just joking. Look instead for a partner who’s worth going the extra mile for, who would do anything for you, and who appreciates everything you do for him or her. But remember, Chris is taken. 🙂