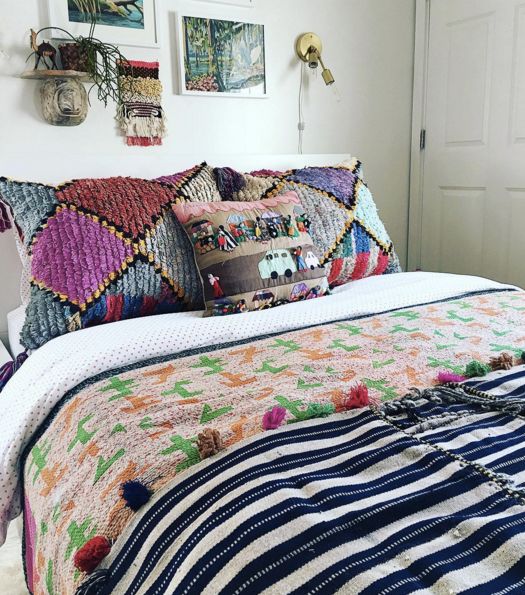 I look at a lot of photographs of bedrooms, and the ones I love most feature layered, multipatterned boho beds. You may not be ready to mix up pattern quite to the extent of the bed in the photo above, but the same FORMULA it uses will work regardless of how many colors and patterns you’re ready to pile on.

No matter how wild or simple the outcome, the layered beds I love share the same basic elements:

See any reoccuring themes? Yep, numbers 1 and 5. Start off with one or the other and build from there.

My favorite inspiration-starter is a killer throw.

Take this kantha quilt, for instance. Most throws will span the width of a king-size bed if spread out lengthwise and cover halfway up the bed if left unfolded, depending on whether you pull it over the foot of the mattress or not. A smaller bed, of course, means the throw will cover more of it.

A vibrantly printed blanket can be substituted for a throw, as shown here, for greater coverage.

But if the throw is small, you can arrange it as if casually tossed on the bed after a nap.

Or drape it over the corner most visible upon entering the room.

Or, if you prefer a tidier look, fold the throw across the foot of the bed as shown here.

Your “throw” can also be a handwoven rug.

Next, focus on the coverlet to go beneath it.

You may find a solid base easier to work with if you’re a newbie to pattern mixing or simply like a smooth, restful surface.

But don’t feel compelled to stick to white. There are lots of terrific neutrals out there, like this gray, for instance…

Or even a solid color, like this spring-like apple green…. 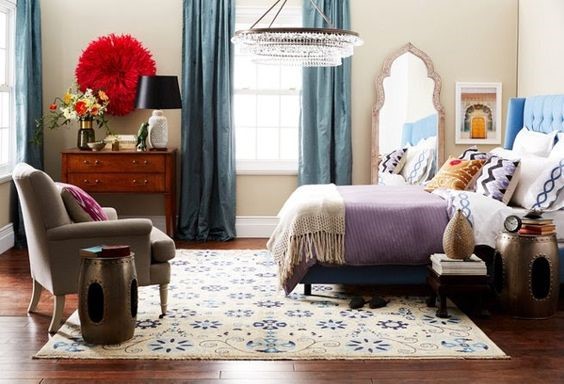 …or this sweet lavender. Although you should consider texture in every layer, I think it’s especially important whenever you choose a solid color. In this example, both the throw and the coverlet are solid, but each has a texture—the crochet patterning and the quilting—which add interest. 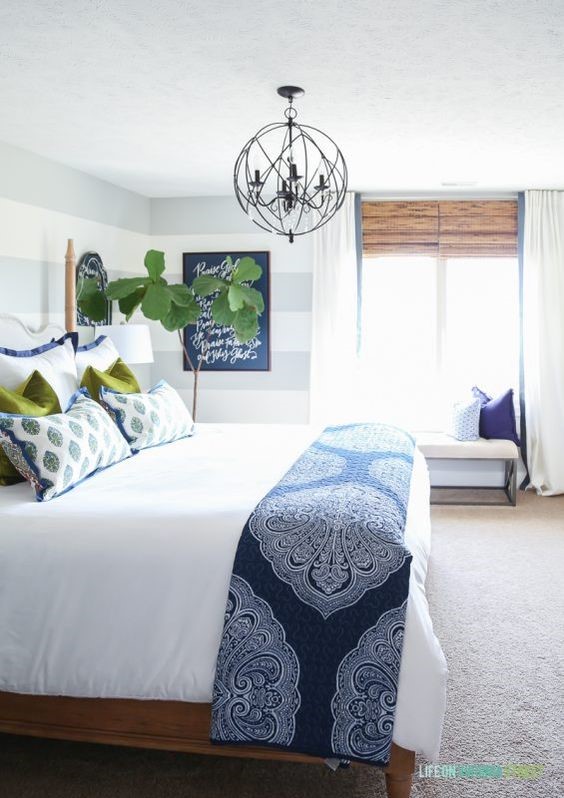 Of course, you may prefer a solid coverlet that’s a smooth surface, like glass. But smooth is a texture, too, and stands out against more embellished pieces to make a very different statement.

Depending on your comfort level, you may even pair a printed throw with a coverlet of a different print. In this example, both pieces are similar geometrics in similar color palettes; but one is mostly dark and the other mostly light—plus the scale is different—so they look as if they belong together.

Same goes here. Both coverlet and throw are unique, hand-embroidered suzani. But they work well together because of the variation in the scale of the designs, as well as one having a light background and the other going darker, though sharing an overall color palette.

Next stop is your sheets….

…where white—or ivory—is always right, or so they say. But it’s certainly not all that’s out there.

Never underestimate the power of sheets in a vibrant solid color, like this rich gold, which contrasts sharply and beautifully with the blue in the throw and the area rug.

Don’t rule out printed sheets either, which, in this example, are mixed with a solid. The more you mix, the better trained your eye will become. Don’t be afraid to go a little wild, particularly if that’s what makes you happy.

I, for one, LOVE printed sheets. They seem so much more special to me. Probably some connection with childhood. I do remember when white was the only color sheets came in, then BOOM!! The market exploded with color and prints. The first sheets I bought for myself post-college were big blousy flowers, and I loved them. I didn’t even worry about them matching anything else because then everybody covered up their sheets with their bedspreads.

On to pillowslips, which don’t have to match sheets!

Or some can and some don’t. Many of us stack double pillows on our bed these days, and most sheet sets come with just two pillowcases. Often you can buy extra, and a few sets package four, but sometimes neither option is available for the sheets we want.

I’m facing that dilemma right now. Take a peek at my pillowcases, which in this view if all you can see of my bed. I need four pillowcases, but my current sets only came with two. So I borrowed pillowcases from one set and mixed them with the sheets and pillowcases of another.

I’m not quite ready to buy new sheets but have scoped out a set of ivory ones that come with four pillowcases for when I am. But after living with this combination, I’m liking the mix. I may even mix it up even more when the time to buy finally rolls around.

The plus is I can buy better sheets and pillowcases for less. Why? Because if I don’t require a matched set I can shop clearance and have fun finding prints that complement each other and the rest of my room.

Although your accent pillows need to look great with everything else you’ve picked out, I think they work best when they refer back most strongly to the inspiration throw. That doesn’t mean they should MATCH it–quite the contrary.

They should recall it in some way and be a strong statement in themselves because they occupy the head of the bed. In this example, the accent pillows play up the colors in the throw but on a grander scale: big, happy stripes compare to petite diamond patterns.

These accent pillows repeat the color palette in the throw but on a grander scale with big, beautiful flowers.

This bed is done completely in white and ivory but creates interest with texture. The accent pillows in particular refer back to the throw. The euro shams also have a zig-zag pattern, like the throw, but the smaller pillows sport textured stripes of varying widths as well as fringe that complements the throw.

These accent pillows refer back to the black in the throw, but tie it in with other natural elements in the room.

The blue accent pillows on this bed play on the blue stripe in the throw, as well as the blue print in the bench cushion at the bed’s foot. The natural colored accent pillows connect the bed to the suzani draped over the headboard. All the textiles in the room share a handcrafted look and feel, which unifies the look even more.

Here’s how I used these simple guidelines to refresh MY very own bodacious boho bedroom:

The short version is, I started with Anthropologie’s Open Market Throw Blanket as my inspiration and paired it with Soft Surroundings’ Sumptuous Chenille Blanket in champagne (no longer available) as my coverlet.

I also considered these options insteads of the chenille blanket: the Luxe Super-Stitch Velvet Quilt in ivory, the Chenille Stitched Quilt in cream, and the Medina Quilt in raspberry daquiri and in bellini (peach). To decide, I narrowed my choices to three, which I ordered and compared in the room on the bed to make the final selection.

I chose to make three custom euro shams in mixed fabrics as my accent pillows. I pulled the colors from the inspiration throw and went with a midcentury-modern wave-stripe, a hand-dyed ikat, and a chinoiserie floral. I think they worked because all were so different yet referred back to the color palette dictated by the throw.

I had seen several ready-made shams I liked, but in the end made my own because I wanted a unique mix. I also chose to use one of the prints for a window treatment and to upholster a chair seat.

What I ended up with is a versatile mix. I can change out any of the separate pieces at any time to freshen up the look. For instance, I have several handcrafted throws I could swap out for the one on my bed now without changing either the accent pillows or the coverlet. And I’ve already shown you several coverlets that would work with the pillows and the throw.

Variations on a theme

Whatever you do, don’t let my guidelines limit your imagination. Once you’ve gotten your pattern-mixing feet wet, who says you can’t mix it up even more?

For instance, the coverlet and the throw can switch places.

Or who’s to say you can’t double up on the throws? Not me!

You can even TRIPLE-up on the throws and skip the coverlet. And if your bed requires a skirt (or you just like bedskirts) consider adding yet another print pulled from the palette of your inspiration piece.

Or make the throw a solid and the blanket/coverlet a print.

Because the truth is that none of this is written in stone. It’s about putting together what makes you happy and what gives you comfort in your most intimate of home spaces.