The first Friday of every October is World Smile Day and marks the creation in 1963 of the ubiquitous (and sometimes unfairly maligned) smiley-face. 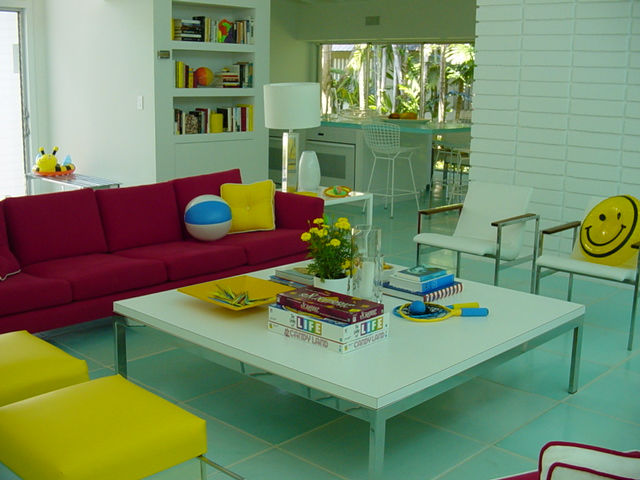 There he is, adding his shameless grin to a float pillow in this pool house designed by Scott Sanders. Possibly you know Smiley better as the grandfather (mother?) of the evolving emoji that pepper on-line posts. But don’t worry; I’m not going to share a bunch of photos of rooms built around smiley-face themes. I only stumbled across this one, and I lingered over it a bit, smiling back, of course.

“If you smile when no one else is around,
you really mean it.”

Then I must really mean it.

I have a solitary job. I work from home. I sit at my desk by the window all day and pound out words on my laptop that others maybe read. My husband Chris also works from home, in another room, by himself too. We reconnect at lunch and dinner, or when one of us needs the other’s help. He has writing questions; I have computer ones.

We’re part of vast networks of lives built around “contact” with people whose smiles we never see, who never see our smiles. I have a friend in Australia and one in Belgium I’ve never met–brought together by the mutual interests of writing and World War II–but I smile whenever I hear from them in an e-mail or social media post. Hi Amandah! Hi Maxime!

What and who makes us smile is important stuff!! So I thought I’d take this opportunity to let you know what made me smile this week. Then you can smile too, and our virtual paths will converge, if only for a byte. 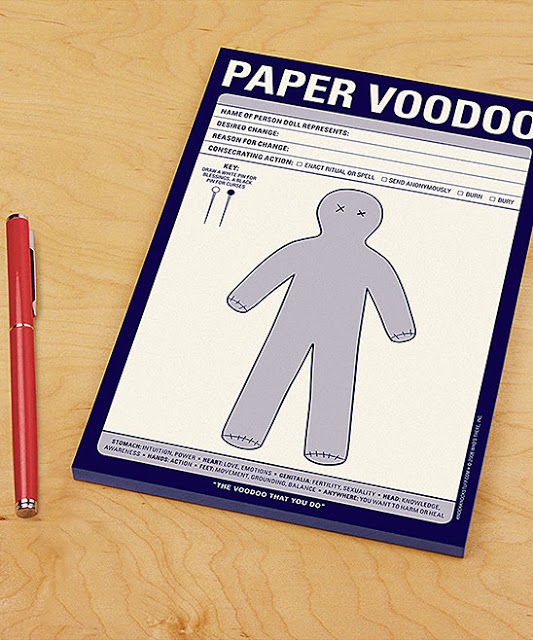 I could’ve used one of these back when I worked in an office with real people. Then, I only had a tacky voodoo doll I picked up on a New Orleans trip. It hung out in my in-basket so anyone entering my office would mind their Ps and Qs (mostly my boss, who was so freaked it WAS laughable).

When we went through a merger, a coworker brought in a clay head she’d made in high school that resembled one of our counterparts at the other company. The head fit on the doll perfectly, and we passed it around to whomever wanted to stick pins in him that day.

Not you or me, I hope. This collection of plates from Vajillas by Nuria Blanco gave me a chuckle. What a great wall display it would make in the dining area of a coastal home whose owners share my twisted sense of humor. If this particular grouping is not to your taste (or you’re not to its taste), the Spanish artist’s Duo Zoo collection parses a variety of less-threatening fish and fowl. Other collections by her include Árido, Botánica, Libre, Apetito, Ciencia, Depapel, and Especímenes.

These boom vases from Dot & Bo caught my eye, and because they were on clearance for such a ridiculously low price, I bought all three. (Mismarked, I think, because they’re higher now.)

As I unpacked them, Chris looked and sounded a bit worried. “That’s Fat Man, and that’s Little Boy,” he said, pointing. “And I don’t know what the third one is—something equally destructive.”

“No,” I said calmly. “They’re vases. Aren’t they adorable?” So mid-century modern.

“That’s not the word that comes to my mind,” he replied. “I never thought I’d see you buying bombs.” I am a notorious proponent of peace.

We both grew up on the cold war, bomb scares closing school for the day, and regular classroom drills about what to do in case of nuclear attack. We’ve smiled over how useless those drills actually were, but they made the adults feel as if they were doing something.

The child Chris developed quite a fear complex around all this. Me? I just enjoyed school days cut short and visiting the boiler room during drills. My best friend’s basement had a for-real, fully stocked bomb shelter, and we played “disaster” in it. For me, everything was a story I starred in.

Anyway, I don’t intend to create any stories where I give the love of my life a panic attack. The vases reminded me of peace, not war. This Bible verse came to mind:

And he shall judge among the nations, and shall rebuke many people: and they shall beat their swords into plowshares, and their spears into pruning hooks: nation shall not lift up sword against nation, neither shall they learn war any more. — Isaiah 2:4

If only such a time would come! And if it did, what would we do with all the bombs? 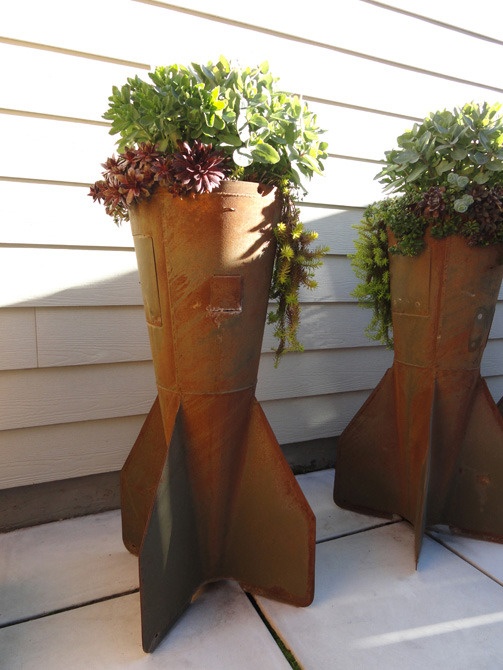 Why nourish plants, of course! Since I’m not likely to find any planters like this at my local big-box home store, I snapped up the vase versions as soon as I saw them.

I think I’ll use Fat Man, Little Boy and their buddy to root some rosemary for over-wintering. Chris loves rosemary. It should help calm his nerves.

…Or so said signage at the Boston Children’s Museum digestion exhibit when we visited there long ago with our now-grown daughter. The museum overflowed with schoolchildren, closely studying the models of what your body really does with a Big Mac and elbowing each other in the ribs mid-giggle.

This clock may be just the way to commemorate that great family memory. Looks like the pink would match my guest bath. If you’re not up for the clock (in white, black or natural rim), artist Teo Zirinis offers framed/unframed prints and a tote bag (yes, really) with the same image. Check them out at Society 6. 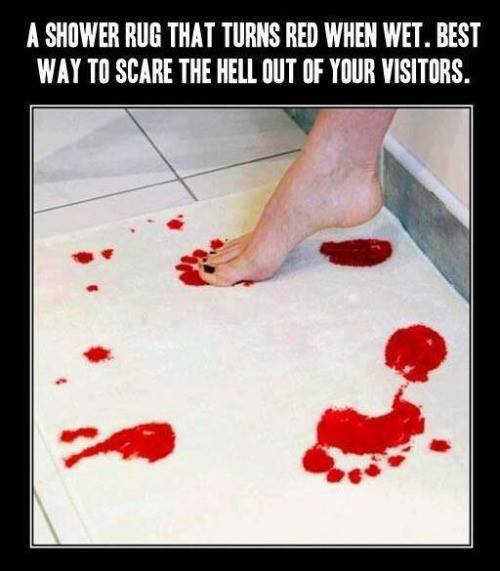 This is the perfect Christmas gift for a certain friend. But I can’t surprise her now because I already posted it to her Facebook page. I think I pounced on this e-card because it brings up another great family memory. No, not involving blood, but close.

When my daughter was about six, we rented a condo until our house was built. I’d bought some unfinished barstools for the new house. Color stains were hot back then, and I was staining them a clear, deep red.

Erin helped me sand. She worked a while, asked if we were done, looked bored when I said no, then sighed and added, “Why don’t we just go buy these like other people? Are we too poor?”

“No, we’re just thrifty,” I lied. “Besides, if we bought them finished we’d miss out on the chance of doing this together.” She wasn’t convinced.

A few days or weeks later while Chris chatted on the phone with his brother in New Orleans, I thought of something else I wanted to stain red. I brought the smallish item into the kitchen and decided I could easily stain it there if I laid out a few newspapers.

I have never been so wrong.

Chris walked around the corner, phone to his ear, just as my brush made the first stroke and streams of red stain, apparently thinner than water, sprayed EVERYWHERE. I felt my face go pale, looked over at him and choked out, “Help?”

He cut off his brother midsentence with, “I’ll have to call you back,” and hung up forthwith.

Long story short: We got the stain off everything that might have cost us our damage deposit and only had to toss some of our stuff—the wastebasket, a foot stool. Chris said it looked like a crime scene, and he reminds me about “the red stain” anytime I get a DIY craving.

Lessons learned: Thrift isn’t all it’s cracked up to be, and there are less messy ways to bond with your kids.

But honestly, with Halloween coming up, don’t you think “crime scene” would be a great party theme?

What made you smile this week?

Share it in the comments. Have a happy World Smile Day, and follow my blog with Bloglovin.