I’m still not an interior decorator, and I still don’t play one on TV. But in the blogosphere, my possibilities are infinite and my influence is growing. Readers seem to like to hear me gripe, so I’ve decided to do it more often, starting now, with five more décor clichés that need to DIE!!!

1. Tripped out over trip hazards

I might be showing my age here, but stairs should be functional and safe. It’s okay to decorate them but not to obstruct them. I appreciate the trend of decorating with fashion, and these shoes are all girly and cute and all, but this is an accident waiting to happen. I’m old enough that I avoid stairs, period. But even when I could climb with ease, I was clumsy enough that I didn’t need help tripping. And sometimes I was tired. And once in a while, tipsy. And well, you get the idea.

If you want to decorate with your shoes, get a cool shelf or rack. Or wear an extra pair on your ears, but under no circumstances clutter up the stairway. And don’t leave shoes scattered about on any floor but the closet’s. I’m not saying this because I’m a mother who still nags her adult daughter to pick up after herself. I’m saying it because I know how sneaky middle age is. One week you’re sleeping through the night, and the next week it’s trips to the WC every three hours. Take it from one who knows: You do NOT want to fall.

What’s the deal with the rumpled bed aesthetic I see everywhere? Is it supposed to look cozy? Or sexy? Like Daniel Craig just emerged with stubbled chin and a sheet wrapped around his privates? Or not…

To me, a big part of the pleasure of getting into bed is folding down bedding that has been smoothed and made up—bedding that looks fresh and feels crisp against my skin. This bed doesn’t even have a mattress cover. A flat sheet has simply been folded over a topper of some sort, and it’s the only tidy part. Absolutely EVERYTHING about this says ewwwww to me.

Except the Daniel Craig part, of course. Let’s not turn sloth into a style icon, K?

This one yanks my chain so hard I had to include THREE photos to show the trend in all its malignancy. Guess my inner writer-nerd is riled. Last I checked, Reader’s Digest Condensed Books did not count as a library. They’re condensed, man. That means editors turned a book into the equivalent of canned soup. If the author wanted to write it that way s/he would have. So lining up these buggers to admire their pretty bindings is a little, well, stupid.

Another goofball idea is COVERING books so they all either look the same (anyone remember grocery bag bookcovers?) and/or match your décor. So if you cover them, how do you know which is which? But again, anyone who covers books for color coordination doesn’t likely READ them, so it really doesn’t matter, does it?

Both of these photos are from Tyra Banks’ Beverly Hills mansion (see more here), currently on the market for $7.75 million and not going anywhere. Just like a brain that doesn’t READ. Tyra.com says Ms. Banks is a model, television personality, talk show host, producer, author (??!!), actress, singer and business woman. But not a real reader, I guess. Wake up, Tyra, and smell the WORDS!

Organizing books by cover color doesn’t cut it either. Is that how you search for your books? Oh, um, I remember I saw a passage I liked in that orange one yesterday. You don’t have to catalog with the home version of the Dewey Decimal System, but don’t own books you don’t actually USE or intend to read. Your visitors will find you out, and it will be embarrassing.

In that same vein, organize the books you keep by how you use them. I have a lot of poetry, so it’s alphabetical by the author’s last name, as is my fiction. Nonfiction goes by subject—art, cookbooks, crafts, gardening, home decor, reference, World War II, and so on. What a concept! Who knew we really DO learn the most important stuff in kindergarten?!!

Reading is the ideal, remember. But if that isn’t going to happen, give the books a home where they’re appreciated for what’s inside them. You can use the empty shelves to display the high heels you left all over the stairs.

And make the bed while you’re at it, okay?

When I was in my 20s, having upper kitchen cupboards with doors was the equivalent of feeling as if I’d “arrived.” I lived in plenty of places where shelves and pegboards were it because of my bohemian penchant for interesting old houses chopped up into apartments.

If I indeed owned dishes lovely enough to display then, I wouldn’t have wanted them collecting dust and cooking grease when I wasn’t eating from them. Yes, an adequately sized range hood, with the right horsepower, vented outside, helps. But how many rental kitchens have high-end exhaust systems? I rest my case.

A pretty display, yes. Easy access, yes. But wash the dishes again before using? Nope. Not me. No extra work, please. Give me a good door any day. That way, if the dishes are pretty, I can get happy every time I open the cupboard to get one out.

5. Sitting pretty but not comfortably 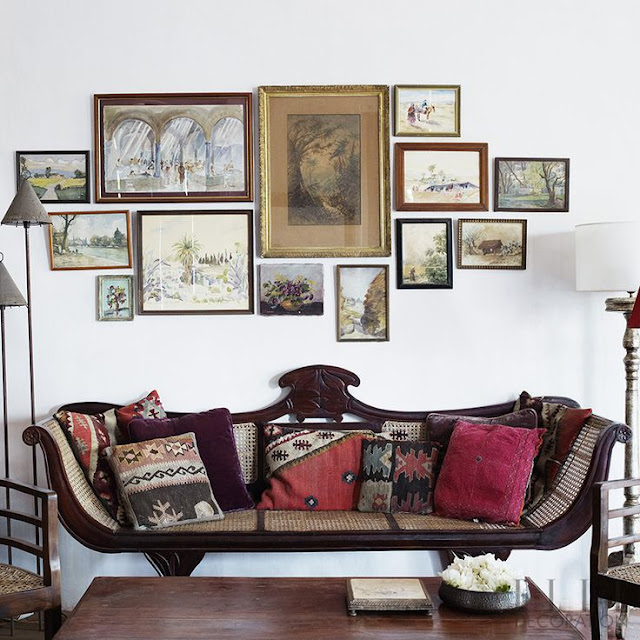 Obviously, no one watches TV from this location. But this settee is perfect if you want to guarantee your visitors don’t stay long. By all means, usher the Jehovah’s Witnesses right to it.

Or your neighbor who doesn’t pull her weeds.

It is a great vehicle for throw pillows, though—one of my weaknesses. But the way the pillows are piled on here pretty much guarantees the guests you don’t want to linger won’t not linger there. So now we have a double “Oh-no! BoHo,” as well as a double-negative.

I’m delighted to report progress on the home décor front. My influence in the design blogosphere must be growing!! I spotted two of the clichés I condemned in my Sept. 17 post reinterpreted in fresh, new ways. Remember that diamond-patterned Moroccan rug? 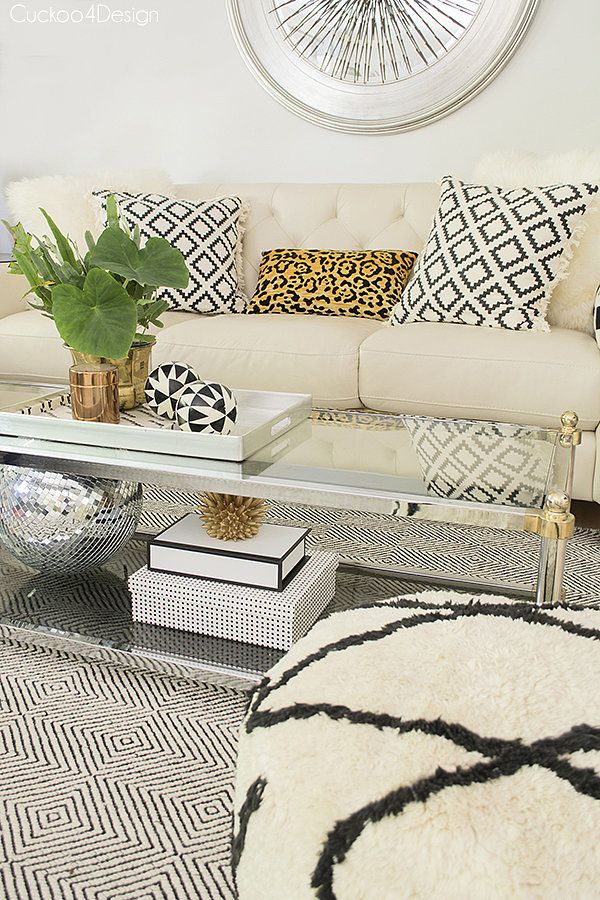 Recently I saw it move from the floor onto a big, poufy ottoman. Gorgeous, huh? But that’s not all…

It’s a throw blanket as well! I’m good with both of these. Behinds and torsos tend to be covered with clothes more often than not, so white stands a better chance on these products than under foot, as long as it’s shoes off and socks on. (Socks that haven’t picked up dirt on the rug version!)

This is progress, too, I think. Progress = progression, and that Juju hat has moved up the wall and onto the ceiling as a light fixture. Next it will likely creep over to the window and fly away. For good. Back to Cameroon anyway. We can only hope.

In the meantime, has this homeowner (or designer) given any thought to feather flammability? Lightbulbs do get hot, especially with no “breathing” room.

PS…I DO like the rug in this photo a lot (seagrass resists stains), so I hope someone rescues it from big bird’s impending big burn.

What décor trends do YOU despise?