I’m goin’ outta my head over this one, and all I can figure is it speaks to my inner child.

It’s the Foxy Faux Fur Rosette Throw from West Elm, and by all odds, given my history with pale pink, I should be gagging right now and holding out garlic. Instead I want to beat a path to the WE store on the complete opposite side of town from where I live and bury my face in it.

More specifically, it speaks to my inner deprived child.

Yes, I was sooooo deprived growing up in the 1960s. I had a bazillion clothes for my dolls and for myself (made by mom’s loving hands). BUT I always wanted (and never got!) one of these…

They’re called muffs, for those of you born too late to enjoy this inspiring child fashion trend. Lots and lots of bunnies died back then to make little girls happy, and us little girls never gave it a second thought. But sadly (?) no bunnies died for me.

I would’ve REALLY liked the muff made to look like a pet kitty (which I also NEVER had). Don’t forget matching ear muffs (kitty faces?). And a coat collar with pompon ties.

All this is really weird because I was NOT a girly-girl. I liked dolls because they appealed to the budding writer and storyteller in me. But put a spool of lace or a ruffle within a hundred yards of me and I freaked. Still do.

So go figure, because I absolutely adore the full Foxy Rosette line.

There’s also an infinity scarf and even a keychain. My pompons!! If I bought one of these, though, I’d be getting strange looks in doctor’s waiting rooms because my hands would always be in my purse stroking my pompon. Er…

There WAS a pillow, too, but alas, it’s no longer available. Probably for the best. You can get too much of a good thing. You likely came to that same conclusion when I mentioned stroking.

Lest I leave you with any unsettling images…

Let me say the pillow photo is what started my creative wheels turning. The striations of the abalone shell in the foreground is what did it. And this…

The WE folks say the foxy rosette look is couture-inspired, and I remembered pale pink made a big splash in spring 2016 fashions previewed a couple months ago.

I had my palette and began a Google search!

It wasn’t long before I struck GOLD.

Rose gold, that is. Because I searched on “rose,” I turned up losts of rooms accented with rose gold and copper accessories. See what you think of these additional room inspirations…

Another addition to my inspiration board leaped out at me from the bottom photo–the marble wall. Only a few days ago I read about marbling as a trend spotted at High Point Furniture Market this year. I could reinterpret the marbling into textiles and finishes. I also liked that an area rug was used in the other examples and thought that would help me introduce some deeper tones to ground the room and give it some masculine weight. 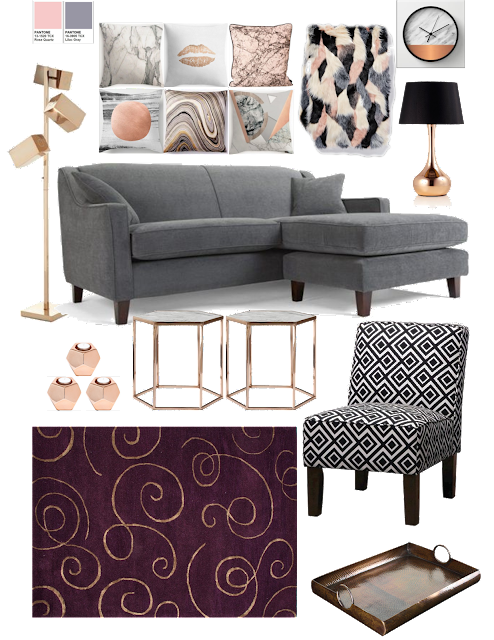 And the purple in the rug will help my gray sofa read lilac gray. I’m loving those marble-patterned pillows almost as much as the throw! I wanted a look that didn’t scream feminine, and that was tough considering pink and lavender are about the two girliest colors on the planet. But I think I hit my target.

I asked my husband Chris for his opinion…

And he thought it looked great, as a virtual exercise. Little does he know what he agreed to. I’ll sneak the stuff in piece-by-piece and switch it out gradually to throw him off. Maybe I can mix it in with the Christmas decorating. He’s always particularly oblivious then.

When Chris finally catches on (along about the time the chair arrives, I expect), I’ll say we still need to add artwork and appease him with a gigantic black-and-white photo of Frank Sinatra.

It’s worth a shot if I can cuddle up with my Foxy faux fur. As for Chris, he’ll have Old Blue Eyes.