Making a life is a lot like making a pot.

Or should I say throwing a pot? Not AT someone or something (though that may be tempting at times). But as in pottery, on a potter’s wheel.

As we live and grow, we all fashion a structure for ourselves, a vessel if you will, to hold who and what we are. Some vessels are stronger than others. Some are even prettier or more desirable, depending on who you ask. Most eventually will need refinement, repair, or replacement.
Eglė Mikalauskienė takes that analogy one step further and has built a life—as in a business that helps support her family—around selling the vessels others make. Again, we’re talking ceramics—vases, plates, jugs, bowls, tiles, figurines, and more—on ebay as Tradenexpo and in the brick-and-mortar Galerija Amfora. Once you see what’s for sale you’ll want to visit, and lucky for you that her hometown of Klaipėda, Lithuania, is a picturesque port city where the Danė River meets the Baltic Sea.

It all started with one unassuming vase Eglė and her husband, Andrius, found, quite by accident, in a local antiques shop.

“The shop was owned by a German living in Lithuania,” she explains. “We picked up a small blue, weird-shaped vase imprinted with W. Germany on the base. It got our attention because West Germany no longer exists. So we bought it for 4 litas—about ₤1 GBP [$1.30 US].

“It was 2011, my husband had just started a financial services business, and we were selling items on ebay to supplement our income until his business took off. Long story short, not knowing what we had, we sold the vase for ₤350 GBP [$457 US].” 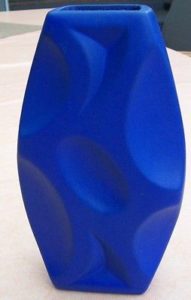 The vase was similar to the one shown at left—same maker, same series, similar glaze, different shape. “A very rare matte blue ROTH Keramik vase,” she elaborates. “So rare I’ve never seen a picture of it on the internet, ever. This photo I found with a Google search is the closest to it I could locate.”

Though the couple made a great return on their investment, their vase was worth much, much more. “Now I know what we had,” she adds. “All ROTH vases from this 1970s series are rare and highly collectible due to the design and because only a limited number were produced. It was worth at least ₤2,000 GBP [$2,610 US].”

The couple used their winnings to buy a camera, which would serve them well in future ebay endeavors, and began to focus their sideline business on West German ceramics.

“There was loads to learn and buy. At the start, everything that had W. Germany on the base had to be in our bag. But due to lack of experience and knowledge, we bought so much useless stock, as you can only imagine.”

Soon after they opened their ebay store, Eglė quit her day job in financial services. “Though I don’t know why. In spite of my education and training, there was no financial reasoning behind the decision other than I didn’t like what I was doing. And the reality was that most of our stock was not that special after all, so our company operated at a loss for more than a year.”

But both Eglė and Andrius continued to read and became more and more drawn into the world of European ceramics. “All those different stories about designers, companies, glazes and shapes—oh, it was, and still is, something so special,” Eglė enthuses.

“It’s amazing how many designers had such a talent that they were way ahead of their time. Some pieces were made in such low quantities due to lack of interest from clients back then, but now they fit the most modern interiors and are so difficult to find.”

Which brings us to how I linked up with Eglė

I was searching for just the right accessories for my own midcentury modern/boho mix of a home and stumbled onto one of Eglė’s auction listings. I was impressed with the quality of her stock and her photos, as well as the detail of her descriptions and overall presentation.

She always includes complete measurements in metric AND U.S. equivalents (saving me the time of emailing questions, waiting for answers, and looking up conversions) as well as photos of the piece up for auction arranged with other pieces.

You’d be surprised how many sellers don’t include in their listings ANY measurements of the items they want to sell—AARGH!! And those vase vignettes? A sneaky (and effective) ploy that made me want to own the entire grouping!

Above are pieces I’ve won in Eglė’s auctions, and below are the ones that got away, though not for lack of bidding effort on my part. 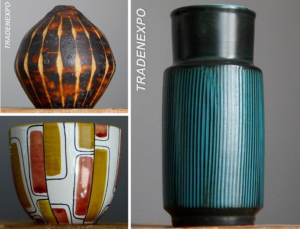 The glaze technique used on the upper left vase reminded me of reed or carved wood, while the retro-mod pattern on the lower left pot positively captivated me. That vase on the right? Well, everyone who knows me knows about my love affair with teal.

After making and receiving my purchases, I decided my readers would enjoy knowing about this ebay store and its owner’s entrepreneurial journey, so I wrote Eglė a message through ebay channels, complimenting her and asking if she’d agree to share some of her story and her selling secrets with us.

And the rest is history, as they say…

In March 2013, Eglė opened her gallery in a trendy shopping district in Klaipėda, where she displays and offers for sale ceramic, art glass and porcelain pieces made 1890-1990 by renowned European producers, most of whom no longer exist. You’ll find studio art pottery as well, and everything sold comes with a certificate of authenticity with information about artist/manufacturer and production date.

And the ebay store? It has since moved from Eglė’s home to the gallery, where three employees measure, photograph, list, sell, wrap and ship while Egle treasure hunts. She also employs an accountant since Andrius’ time is now taken up with his own clients.

“I kind of occupied all the managing space and communicating with clients in Tradenexpo and Amfora,” Eglė confesses. “He always laughs that there is no space for him anymore. The staff calls him our honorary president.”

My first question when I saw these photos and heard Eglė’s story was, Wherever do you find it all?

“I started off shopping at thrift and antique shops in Lithuania, but soon their supply was not enough,” she says. “So Andrius and I started going to Germany. It took us years to establish our supply, and even now that’s our main challenge. I spend about a week out of every month away from home, hunting vases in Germany. I drive about 1,000 miles every month and walk on foot 50 more.”

A collector herself, she admits to some angst over parting with the objects of her passion. “Most of my pieces sell through ebay auction. I set low starting prices, and quite often my items sell inexpensively. So if I have an item I know is rare, I do find it hard to list.

“It’s not about the money. I’m just afraid when people pay less they might not appreciate the piece for what it’s really worth. It’s about the designer, who spent hours working on the vase and perhaps won numerous design awards. It’s so important that those artists, many of whom have since passed away, are appreciated.”

Any ebay selling tips for the rest of us?

“The great thing about ebay is that there are no boundaries—the world is my marketplace,” Eglė says. “Though from Lithuania, Andrius and I went to college in the UK. We moved back in 2009 when I was pregnant with our second child, and I was suffocating here, living in such a small province. Now I feel like I’m in the world again.”

Beyond that, she says she doesn’t believe there’s one right technique in choosing what to sell. “The way Andrius and I started is by sitting at our PC and browsing through each and every category with an open mind. We looked at them all, no matter how crazy it sounded to us or how unfamiliar it was. Then we shortlisted categories. And then we watched. We watched how well items sold and whether they sold through fixed-price listings or auctions. Once you see what sells or moves quickly, you may start considering selling that yourself.”

Ebay actually has an application available to help sellers do this research. It’s called Terapeak, and it comes with a seven-day free trial.

One thing to remember,  Eglė says, is that a “buy-it-now price” is not always a good indicator of what something is worth or what it will sell for. “People think of various crazy prices. I consider ebay a place where the buyer determines the price. As a rule, lower starting prices on auctions generate more audience. But you have to be prepared for the risk because there will be cases where you’ll lose money.”

Eglė also offers her buyers an option to save money by combining shipping on multiple purchases. “My ebay auctions all end on Sundays. So if I see the same buyer buy on one Sunday and then bid on the following week’s auctions, I offer to hold their winnings until the auctions they’re interested in are over. Since I started to offer this service, I’ve picked up clients from all over the United States. I supply quite a few shops and designers because people like that an item is vintage AND, of course, that the design is exceptional. Sometimes I ship boxes containing 20 to 25 pieces, and all arrive intact. My US customers love German pottery!”

But what about supply? Where does she find such terrific stock she can afford to sell at such competitive rates? “Sadly I cannot help with supply,” she adds with a wink. “That’s a field where everyone has to be creative and communicative on their own.”

Visiting Klaipėda, Lithuania, may not be on your bucket list, but given its proximity to the Baltic Sea (think amber!) and the number of German timberframe buildings there, perhaps it should be.