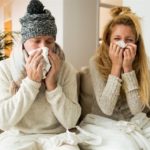 Maybe you didn’t notice I was missing in action the last week or so. A late-winter/early-spring cold, courtesy of my all-too-loving (in this case) husband, sidelined me.

Chris woke up with a sore throat on a Monday, and by late Wednesday I knew I was in for it, too. Friday (last week) was the worst day, and each day since has been a little better, though I’m still trying to clear my head (literally and figuratively).

Knowing there are always a lot of bugs around as the weather swings back and forth between winter and spring, I decided a cold survival guide would be in order. Here’s how I made (am making) it through…

1. A TV show to binge-watch

This is the KEY to survival.

My guilty pleasure this time around has been the popular Australian series, “A Place to Call Home,” also known as “Down-Under Downton.” It’s available on Acorn TV through Prime Video, and its five seasons of 12 episodes each have kept me going for more than a week now, in between rounds of Mah Jong and Spider Solitaire on my tablet. (Season 6 is in the works and will debut later this year.) 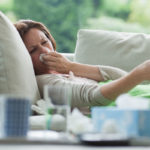 By the time I started season 5 and felt like moving off the sofa to take on other chores, Chris had become interested in the show from hearing bits and pieces while passing through the living room and fixing meals. So now we’re taking in that last season together in the evenings.

The main character is an Australian nurse, who, while living abroad during the 1940s, marries a Jewish doctor and converts to Judaism. Together they fight fascism in the Spanish Civil War and later, during World War II, join the French resistance. Both eventually spend time in Nazi concentration camps.

Sarah, the nurse, searched for husband Rene after the war but was told he’d been executed, so the series begins in 1953 when she returns to Australia. She earns her passage on the journey home as a ship’s nurse, and calls on a wealthy widower she met en route to help her when her Catholic mother in Sydney rejects her. The widower, George Bligh, finds her a position in the rural community of Inverness where his family represents the landed gentry.

On the surface, the series wrestles with prejudice that remained after World War II–class clashes (city vs. rural, as well as rich vs. poor), religious and cultural heritage differences, and relationship and sexual preference troubles. There’s plenty of romance and a fair share of love-to-hate villains!

You may want to check it out, so I won’t give away any of the goodies. Period costumes and sets are terrific, including the automobiles–everything from fancy European roadsters to beat-up pickups to large-finned American imports. And it all comes with an Aussie twang!

While “A Place to Call Home” provides its share of steamy love scenes–many straight as well as James’ ongoing exploration of his gay identity shown here–the cold-healing steam I’m talking about comes in the form of humidity. 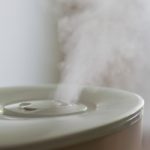 Long, hot showers and a percolating vaporizer on my sofa end table helped to loosen up my congestion and alleviate discomfort.

And why not? On “A Place to Call Home,” everyone from Sarah’s Aunt Peg (above) to formidable Ash Park matriarch Elizabeth Bligh is always brewing and sharing their cuppas. I certainly want to feel part of the clan.

We stock a deep kitchen drawer with almost as many tea varieties as the grocery store. I’m an herbal tea fanatic when I’m well, so let’s just say I made a significant dent in clearing out aging stock this cold go-round. 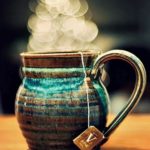 Taste buds are different when you’re sick, but my favorite of the lot has been a tie between Twining’s lemon & ginger rooibos and Republic of Tea’s Strawberry Chocolate rooibos with a dash of milk and a shot of sugar-free fudge syrup. Honey is soothing for the throat, too, but it’s not on my diet, so I get my sweet on with stevia.

Yes, that’s the same guy in bed as in the photo under #2, but here he’s shown with his long-suffering wife, Olivia.

Though I always love hugs and kisses from my hubs, cold-soothing hygge for me REQUIRES:

5. A guilt-ridden husband to wait on you

Mine may not be a medical doctor, like Carolyn’s Jack. But he did pass me the cold, and fair is fair. Am I right? I AM thankful the cold had the decency this time to wait to hit me until he was up to the task of penance, which is timely, what with the Easter holiday and all.

So if you want more… 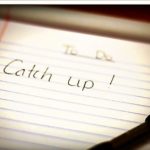 Enjoy whatever this spring weekend holds for  you: Egg-coloring, egg-hiding and finding, candy overload, April Fool’s pranks, or religious celebrations with family and friends.

Whatever YOU choose to do, just know I’ll be playing catch-up and giving orders in between episodes of the Lawson “place to call home.” ;->