“If a picture can tell a thousand words, then an interestingly framed one shouts volumes,” says interior designer Kit Kemp in her latest book, Every Room Tells a Story.

A painting or an image or an object can be framed in myriad ways: behind glass, under glass, or surrounded with carefully chosen items or materials.

“We have created frames from old mobile phone cases and printing press letters, leather buckles from a belt and old floorboards,” Kemp says. “We have used the front of a kennel and an oar from a boat. We have used old twine and a collection of buttons.

“Anything can be elevated—from pages in a children’s picture book, a collection of plastic insects, a favourite handkerchief, a deck of playing cards or pieces of fabric—into admirable works of art. It is the framing that makes you look at them with fresh eyes…”

Let’s back up a bit. Did she say plastic bugs?

Well, yes, and the proof hangs in a suite at New York’s Crosby Street Hotel, one of several luxury boutique hotels Kemp co-owns with her husband Tim (the rest are in London). These are just two “frames” in this rooms featured bug collection. Those on other walls have been arranged in different-sized but still matching frames.

I, for one, will never look at plastic bugs in the same way–I want some, NOW! And honestly, would you even look twice at these if not for the uniquely detailed frames? Kemp credits her framer Marcus Wells and describes theirs as a “joyous relationship.”

“He feels free to show me new ideas, always lugging in boxes of stuff but never looks tired, and I never feel shy to suggest an unusual combination. His workshop is a low-tech cornucopia of recycled materials—recovered from skips, buildings sites, even the side of the road—as well as art from auctions in old-fashioned gilded frames. Between us, there is enthusiasm, fun and never-ending discussion.”

A portrait of the Kemp family pet, a spaniel named Brumus, was framed with flattened dog food cans and given pride of place in Haymarket Hotel‘s restaurant, which is named for him.

I say, let every dog have its day and every queen her jewels. 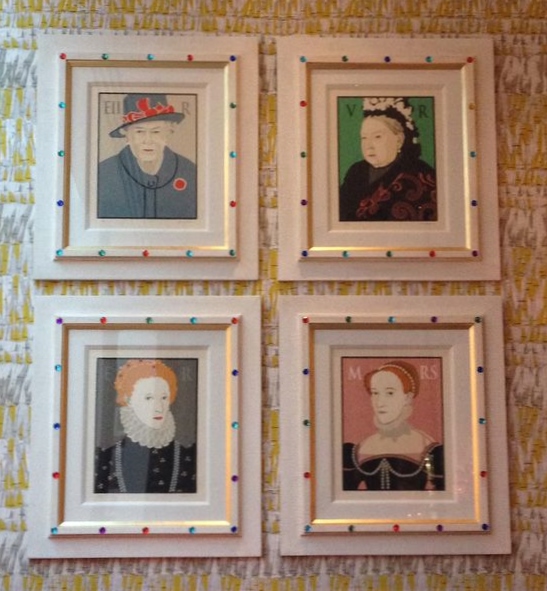 Though these illustrations of Great Britain’s four female monarchs—Elizabeth I and II, Victoria and Mary Queen of Scots—aren’t large, multiple mats and a dimensional frame with “crown jewels” elevate their importance and allow them to add energy and color to a corner of the bar at Ham Yard Hotel.

But you don’t have to break the bank (or drain the royal treasury).

Kemp says they made this Perspex box of rhopalocera that hangs in a suite at the Charlotte Street Hotel using inexpensive fabric butterflies. Be still my fluttering heart!

You may be staying at the toney Ham Yard, but this display of bowling balls and shoes purchased on e-bay guarantees you’ve reached bottom, so to speak—”The Croc” bowling alley and special event space in the hotel basement. Even the lamps shout place, made from repurposed bowling pins. 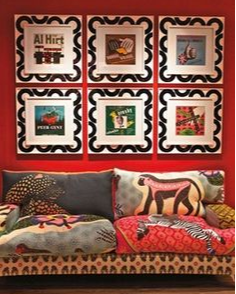 “Croc” is the name given the sound made when the ball hits the pins. Kemp pushed the idea a bit further and adorned the walls of the adjacent dance floor with life-sized driftwood crocodiles, “framed” in Christian Lacroix’s “Butterfly Parade.” Lighting, coupled with the dimensional reptiles, makes the butterfly wallpaper appear 3D as well.

The 1950s vintage alleys were brought over from Texas and restored. LP album covers from the same era stand out in their frames thanks to pieces of records arranged in a scallop fashion.

The Qalakabusha sofas are limited edition from Ardmore, a South African company, and add to the jazzy atmosphere of this special event space.

A great find may call for a bit more investment and oomph.

“In the 1920s, fabric designers like Louis Lang would rise in the morning and hand-paint a few design repeats to try to sell to the couturiers and fabric design houses in the afternoon,” Kemp says.

“We found a lot of his original drawings in a forgotten portfolio and have lovingly framed them—they are beautiful pieces of exquisite work and I never tire of looking at them. I hang them in sets…They are quite small so the secret was to make them look more important to draw the eye in. We have used a mirror frame for this to great effect.”

Some of these designs hang in Kemp’s vacation home in Barbados, where the mirrored frames reflect the bright colors of the Caribbean chosen for her home.

Grouping, indeed, does the trick.

This one frame contains 49 miniature dog paintings by Holly Frean, and another hung on the opposite side of the same doorway in the Ham Yard’s Terrace Suite contains 49 more. “Holly’s work is witty and covers many subjects,” Kemp says, “for example a made-up pack of cards of 52 different artists, where Holly has painted her interpretation of each artist in her own inimitable way.

“She creates multitudes of the same animals over and over again in miniature. I particularly liked her doggies—I spend ages looking at them because their expressions are so fascinating. Although this set of paintings are multi-coloured, the blues caught our eye, and so we built upon it for this apartment space.” (More photos of this suite in Wednesday’s post.)

And sometimes a frame isn’t what we expect, nor is the artifact.

Yes, this looks like the stately library at the Ham Yard. But what’s under glass on that table?

Why it’s some whimsical mushrooms AND a waving Queen Elizabeth with her royal guard! All are by outsider artist Mimi Chanard.

More domed objects by Mimi—mushrooms and starfish—work with mirrored lamps and shades made from old ikats to anchor a 10-foot long West Sussex farming scene. The painting is done in oils by Lucy Kemp Welsh.

“A Royal Academician and painter on a large scale, her peers include Sir Alfred Munnings,” Kemp explains, “but she was never recognized in the same way…It’s my favorite painting in the room.”

And some vignettes may even preclude the need for a literal frame.

The outdoor living room in Kemp’s Barbados vacation home is a case in point. The painting on the far wall calls out for a closer look, thanks to the interesting gathering of objects on the buffet beneath.

Hardwood crafted into candleholders takes the place of an actual frame for this cheeky painting by Spanish artist Ramiro Fernandez Saus. The coral-colored seashell vases draw you closer so you don’t miss the sweet detail of the painting and the critters crawling on the vases.

If you’ve stuck with me all week, know that I’ve only touched the tip of the iceberg. This book is full of beautiful interiors and expert advice. Follow the link to my SHOP: Books Blogged page to purchase Kit Kemp books and others I’ve discussed in blog posts, and follow my blog with Bloglovin.