How did you enjoy your first day of summer 2017 yesterday?

Here, in Central Indiana, US, it was 86, sunny and breezy—a lovely day! Chris and I drove to a nearby park mid-afternoon and took a walk under the shady trees—something we do a few times each week, weather allowing. It’s a good stretch of the legs after sitting all day, as well as a time to share and decompress in nature.

Speaking of nature, I thought the summer solstice would be the perfect time to revisit my gardening efforts this season—mostly in pots now that we live smaller in a condo. Remember how it all looked right after planting? Everything’s grown a bit since then, and I’ve ended up pursuing a few more gardening projects than first planned. (Imagine that!)

Let’s start at the front door, shall we?

Here’s how my inverted-pyramid corner hanging pot of succulents looked just this morning. I used one pot of hen and chicks (lots of chicks!)—you can see those spilling out on the right—and filled in with a variety of trailing groundcovers from one of those succulent “tiles” the garden center’s are offering now. I love that they’re starting to flower! The flowers are delicate, yes, but still lovely.

This sort of planter is perfect for the corner by my front door (out of photo to the right), and the succulents are great for it because I don’t need to water them that often (and mess up the siding). Neither do they drop a lot of debris like most annual flowering plants.

The baskets of Boston fern were especially HUGE and gorgeous at Kroger’s this year—and only $12.99 to boot! Beneath the fern are caladiums interplanted with fiber-optic grass.

I love the combination—and all plants are thriving—but I’m not as thrilled as usual with this year’s selection of caladium varieties. The ones in front—“First Kiss” (Caladium “Arno Nehring”)—are nothing short of drop-dead gorgeous, with big leaves and great color.

But the one at back left—“Raspberry Moon”—leaves a lot to be desired. The leaves are smallish and the colors too pale. The clueless nursery folk at Lowes had them in the sun, which didn’t help, but they’re pale even after days in the shade. “White Star,” back right, is just okay; decent color but smallish leaves.

Usually I divide and mix caladium varieties within each pot but decided to separate them this year. Next year I think I’ll go back to mixing AND to the nursery I used to frequent. I was trying to save money and get most everything in one place this year, but I can see that’s not the strategy to take in 2018—at least not with caladium.

I’m not always able to find the fiber-optic grass, but Home Depot had a great selection of it this year and earlier in the season than usual.

In the patio sun spot

Remember those cosmos seeds I planted in pots? Well, the dwarf variety is coming along (left). I was tickled enough with their success to pull out a second planter bowl and plant more seed. I was too late to get anymore dwarf cosmos, so I settled for a sherbet-colored zinnia mix (right).

You know, those buggers germinated overnight!! I couldn’t believe it. When they get a little bigger I’ll thin them out. And hopefully, by the end of July, I’ll have more flowers for small bouquets.
One measly seed of the species cosmos germinated, so I planted lavender in those pots instead. Every week or so the two planters give me enough blooms for a small bouquet. And you know, don’t you, that if you keep picking the plant produces more flowers, right?

I hope to plant these in the ground on the west side of the house in the fall. I think they’re tough enough to make it there.

Susannadanna and her curly reed hair are doing well, too, and she seems happier with the lavender plants than she was with the cosmos seeds. Maybe because it matches her headgear?

On to the patio entrance

I changed things up this year by planting my strawberry pot with annuals instead of culinary herbs. With our new diets, we just aren’t using fresh herbs the way we used to. I still love herbs as plants, though, and hope to add some next spring as sidewalk edging (particularly lemon and variegated thyme).

But for now, this multi-opening pot is filled with white sweet alyssum and blue lobelia, which has done me the honor of bursting forth with abandon. This part of my garden gets morning sun, then dappled and full shade the rest of the day. So the blue really pops, and the alyssum smells heavenly.

Both are annuals that disappear early in the garden centers—at least around these parts. So if you want them and see them, grab while you can or start your own from seeds.

The classical fairy gardens are doing well, and I’m doubly pleased I cut back on the number of plants. As you can see, the Scotch moss (two above and one below) are doing a stellar job of taking over the fairy “ruins.”

See the kitties on the bench and in the stone cave and the turtle on the lower right edge of the pot? Cute, huh? Yes, I realize the scale is a bit off, but who’s to say the fairy world isn’t a bit topsy-turvy compared to ours?

Originally, I wasn’t going to use this planter this year, but then I saw a photo of a similar pot planted with white alyssum that spilled out and down like Rapunzel’s hair. By that time, all the alyssum from the garden centers had been snapped up, so I opted for moss rose (portulaca) instead, which will vine eventually, though not in the same cloud-like fashion. For right now, my goddess looks a little butch, but I’ll share a snap later in the season when her locks grow out.

I must admit, this lady looks lovely in the dappled shade of my Japanese maple, alongside the classical fairy gardens. But my notes for next year will include “MORE alyssum” to give her those goddess-like tresses.

Front, though not center

Some succulents from the tile, a miniature false cypress shrub, two antique capstones, and a few rocks green up this corner where the sidewalk turns into our front-door patio. In spite of a pot that holds little soil and drains too fast, all plants seem to be doing well.

If I seem to use a lot of succulents (and there are more to come!) it’s not only because they’re great plants. The outside of our condo is mostly stone-faced, and our foundation planting areas are “mulched” in river stone. So DEEPLY mulched in river stone that planting in the ground is a major effort. All that rock and stone also absorbs all the heat beating down on it, releasing it back onto the plants. In full sun, I have to use tough plants that can take the punishment.

At the opposite front corner of our unit is my monument to repurposing. The pedestal piece molded to look like the capital of a Greek column was a planter whose bottom, though concrete, wore through (no drainage hole).

The birdbath on top I’ve had for years and struggled to keep clean enough to meet the birds’ hygiene standards. Though I power-washed it often, last year even that didn’t cut it. Nary a bird visited, so this year it’s a planter.

Although it looks better than when I first planted it, I’m still not totally satisfied with it. But it will fill in eventually, right? I’m limited to what will grow in such little soil and (I hope) winter over. But how ‘bout that cute kitty sunning itself at the base? Now HIM, I LOVE, chipped ear and all!

It may be shady here now, in the morning, but just you wait…

Gone are the days when an ornamental pear tree growing on this strip of grass shaded the entire west side of the condo from the afternoon sun. Alas, the tree grew too big for the space. Two years in a row we paid an arborist to trim back limbs growing over the roof and thin out the narrow branching structure. We’d hoped the pruning would last longer, but it got to be an expensive proposition, and we finally had the entire tree removed.

There used to be three boxwoods planted along this strip, but they succumbed to the radiated heat within a month after the tree was gone. Each year since (three now?) I’ve tried different plants in pots here but none do very well in the strong direct sunlight with the heat radiating off the condo stone and the river rock mulch. Placing the pots under each of the two windows helps but not by much.

So this year I went with more of the tile succulents, and they’re flourishing. FINALLY!! Wish they had some height, but at least they’re green and will eventually vine over the sides and (crossing my fingers) escape into the river stone.

They also get tiny flowers. See the yellow one in the center? There’s also a white one in the back right corner. I pick these and mix with the lavender for small bouquets.

Two of the larger, deeper rectangular hypertufa pots are planted with these, as well as two of the shallower oval ones.

Never one to be satisfied, I also decided to try some black-eyed Susan seeds on this side of the house. That’s what I had planted at our other house around this rusty cat garden ornament, and it always looked so lovely poking its head out and swaying in the breeze. Here, the flowers would help hide the rocks I put on the ornament base to keep it upright. And they should be tough enough to stand the afternoon heat.

But did you know black-eyed Susans take three weeks to germinate? That’s what the package said. It also said to TRANSFER seedlings to the garden after a few inches tall, so what you see now may be as much as I’ll get from that packet. But I don’t have anywhere to keep seedlings, and I wanted to give it a whirl.

That wraps up my start-of-summer garden tour

Time to mellow out and cool off. Kitty Buddha says there’s an an iced coffee waiting for me as my reward for photo- and bouquet-making. 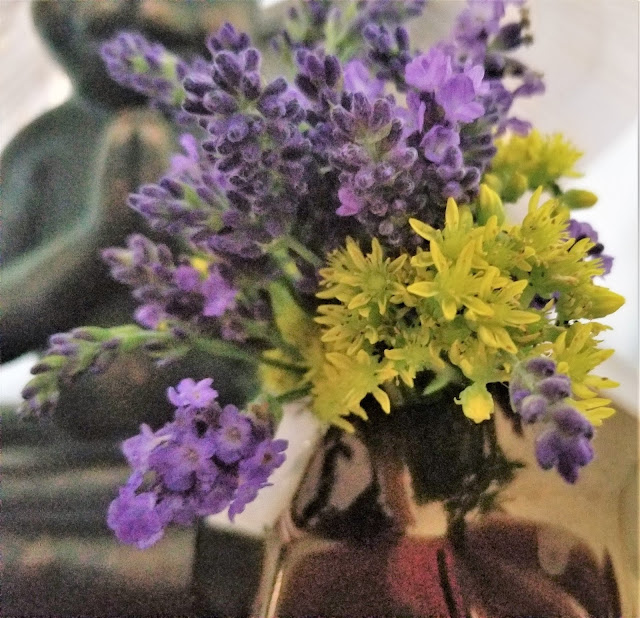 Because even in a SMALL garden there are bouquets to be made and enjoyed. So breathe in my lavender and exhale some boho joy and kindness! The world needs it more than ever.