I confess: I’ve ALWAYS thought a man in a kilt was sexy. And I’ve always wanted to ask any I saw what was in their purse.

Nine of the 13 governors of the original colonies were Scots, as were about a third of the signers of our Declaration of Independence and more than three-fourths of U.S. presidents.

April 6 was selected by the U. S. to honor its eighth largest ethnic group because it marks the day in 1320 when Scotland declared its own independence from Great Britain.

We like to think of specific tartans associated with Scottish clans, but that’s merely a Victorian affectation. Highland tartans are more accurately products of specific regions or districts, based on the weavers’ tastes and abilities, local tastes, and natural dyes available. All of which means you can wear, decorate or identify with any ol’ plaid that strikes your fancy.

And while plaids get a bump in popularity every fall, they’re not just for winter. If you can take your eyes off the hotties in the above photo for a moment, feast your eyes on these breezy, blowsy, bright, beautiful and summery plaid rooms and scenes. 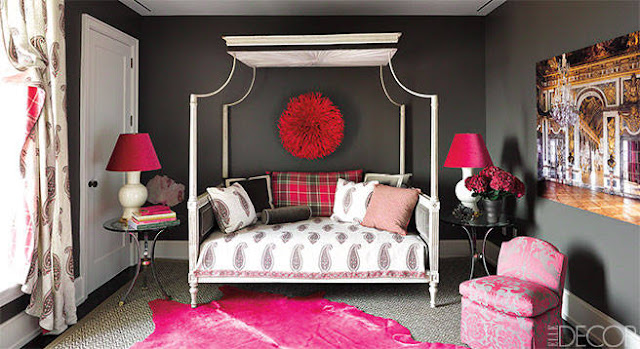 We tend to think of plaids as masculine, but a pink-and-gray plaid works beautifully in this ultra-feminine guest room on the central pillow and the drapery lining. The room also leans toward the glam side, so pairing plaid with velvet and brocade keeps it from being too-too feminine.

What better way to cool off in summer than relaxing in a cool blue (air-conditioned, of course) bedroom? The plaid pillows are the perfect accent against the leafy wallpaper and white bedding. 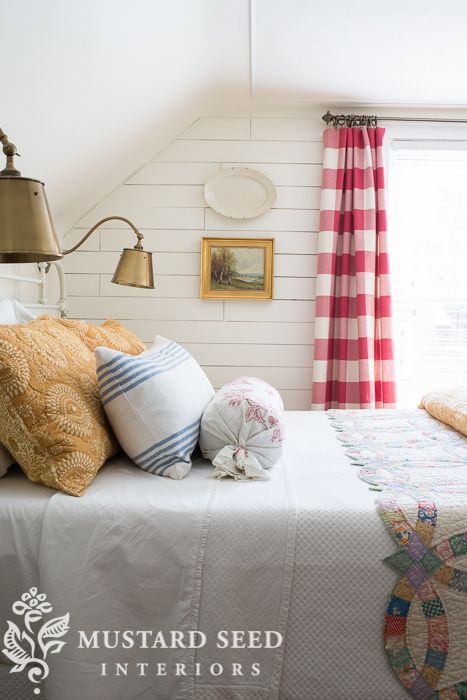 Like stripes, plaid mixes well with other patterns. Here we see large-scale gingham-plaid curtains used harmoniously with a pieced quilt of many prints and solids, a floral motif and stripes.

And plaid works with other plaids, too! I love how these chairs are upholstered, and that magenta plaid is to die-for. Even a third plaid on the wall isn’t too much, and it makes a great backdrop for the urn full of flowers.

This buffalo-plaid, black-and-white area rug mixes with the boomerang pattern on the mirror, the harlequin pillow and the tone-on-tone chair to unify this room and give it energy. Without it, this midcentury-modern space would be lost in the past.

Black-and-white and plaid all over

A floor-length plaid table topper reinforces the cross on the pillow and the pattern of the woven blind. Hey, I had an outfit made of this very same plaid in eighth grade—vest, slacks and skirt—and take my word for it, it looks better here.

Here’s a similar plaid recreated in tile for a shower. Stunning!

And what better picnic blanket or tablecloth could you imagine? Colorful, bright and ready for summer!

Make this your summer of plaid…