The Greek philosopher Plato said, “The house that has a library in it has a soul.” He could have been thinking of a library something like the one on Downton Abbey. But if we’re honest, for those of us who treasure our books, wherever we display them in our homes IS our soul spot.

I think it’s the same for the fictional Lord Grantham. He takes care of Downton Abbey estate business surrounded by his favorite things: treasured books, an elegantly appointed desk, man’s best friend Isis sleeping on the floor nearby–that is, until recently, when an aging Isis left the family to travel over the Rainbow Bridge. (I think I got more weepy-eyed over that loss than Sybil or Matthew.)

Robert (yes, the earl and I are on familiar terms) spends time in this room discussing estate issues with Mary and Tom, whose counsel he’s learned to appreciate. He also receives callers here, as Cora does in the drawing room. Sometimes the family gathers here, but we’ve yet to see anyone curl up with a book on one of those comfy sofas. Perhaps that’s in store for the next and final season, which premieres Sept. 20 in the United Kingdom and will air in the United States in January 2016.

Before we examine how to scale this library down for a 21st century lifestyle, let’s take a moment to review the room from different angles in these slides:

The library gives up MORE secrets 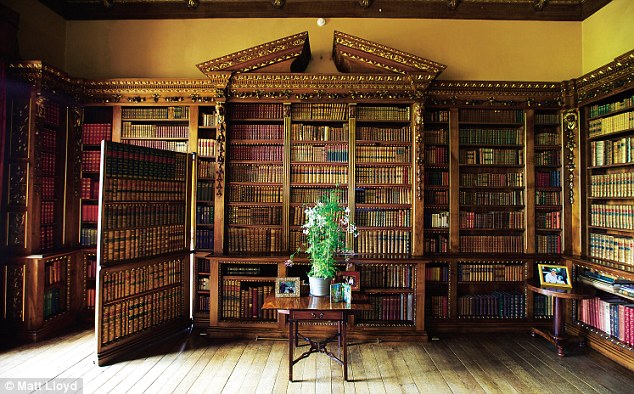 The library at Highclere Castle, where Dowton is filmed, contains 5,650 books, some dating back to the 16th century and dealing with the running of the estate. Not addressed in the show is that one panel of books disguises a door into a music room. We can only wonder how such a door and secret room might have been used in earlier times.

In reality, the library of an Edwardian home functioned more like the home office of today–albeit a grander one. In the second half of the 20th century, we might have called such a space a study or a den and still considered it the domain of the man of the house. With personal computers now as commonplace as desks and chairs, the home office has continued to evolve into something like a second family room. When the adults (of any gender) are done working on the computers for the day, the kids of the house move in for play.

A palette with the patina of well-thumbed pages

Kelly-Moore Paints gives us two reds in the Downton library palette–one more saturated and warmer than the other, which has purple leanings. The brown is decidedly cool, a counterpoint to the warmth of all that carved and polished wood.

The books are priceless, but everything else? Priced MORE… 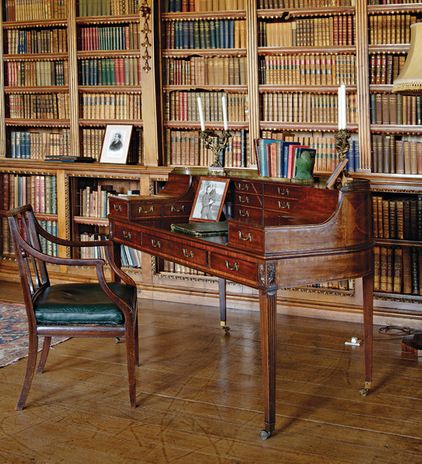 …and as I priced it out:

Whew! The only things I’ve ever owned that exceeded these tallies either moved on four wheels or stood still and held up a roof and walls! When I went looking for inspiration photos of similar home offices reinterpreted for today I began to realize I didn’t like Edwardian style much. It’s beautiful, no question, but too fussy for me. So I opted just to look for rooms I liked and thought my readers might, too.
I did try to…

This is, after all, BoHo Home. I can do what I want here. So I bring you five bumped-up-boho versions that stamped my library card.

I love that the bookshelves are handy to the desk–something I always shoot for in my home office. My favorite part though? The gorgeous tassle hanging on the crystal doorknob.

I’m not much of a fan of bookshelves that contain NO books, but I do think the shelves are well-arranged, and this looks like a space the whole family enjoys. My favorite part? The fun touch of the oversize letters: “red” in silver and “RED” in gold. Buy these at a craft store or online and spray paint to suit. Cute!

If I worked in this office, I might never leave. I love its French lines and sophistication, but my favorite part is how the forsythia branches in the vase on the desk mimic the wallpaper pattern. Tres chic!!!

Positioning the desk against the built-in bookshelves is an interesting idea. But the idea I’m gaga over is a fireplace in my workspace. I’m perpetually cold indoors, even when it’s in the 90s outside!

The least-finessed of all the spaces, but it’s my favorite (and it has nothing to do with the tabby cat that looks like my Maisie). I love this room because it’s completely without pretense, and its beauty seems to come from the patina left behind by the family who dwells here. I see kids curled up on the loveseat in the evening while a parent drills them on spelling or history or math. I see soul here, with a great lot of books watching over.

Which brings us back to Plato AND to Lord Grantham, who in spite of his wealth has nothing over on this family.

Or mine, for that matter. Or most certainly, yours.