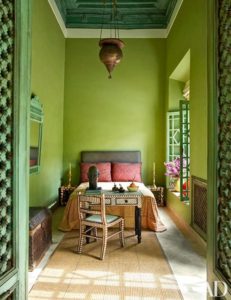 I don’t know if the painter Claudio Bravo ever met singer-songwriter-musician Graham Nash, who wrote the late 1960s hit, “Marrakesh Express.” But it’s Nash’s song that chugs through my brain, like the train from Casablanca to Marrakech he sings of, every time I look at these photos of Bravo’s recently reimagined Marrakech riad.

More likely (though a far cry from fact), it was the reverse. The song, written in 1966 and released in 1969, could be what inspired Bravo to ditch the concrete jungle of New York City in 1972 for the splendors of the Mediterranean sun on Africa’s northern coast.

Bravo eventually owned three homes in Morocco, and this four-bedroom, single-story one in Marrakech became his winter abode. When the painter died in 2011, he bequeathed it and much of its contents to a friend. It’s new caretaker called on Sardar Design Studio of New York to refresh the place as a getaway for her family while maintaining its stature as a museum home. The results are beyond stunning, as you will see.

Bravo was a hyperrealist painter, so I think he would’ve appreciated Nash leaving the first-class section of the train to mingle with the common folk and their animals, as the song describes. In fact, this 18th-century home is reached via twisting streets and alleyways, tucked amid merchant shops and artisan stalls. So it seems only fitting (to me anyway) for Nash’s lyrics to narrate our tour. If you’re a boho child of the late 1960s, like me, you surely remember the tune and can, at the very least, hum along.

All on board that train!

A 19th-century-style bronze knocker and a plethora of nailheads greet you at the front door. Inside, a Syrian bridal chest and mirror inlaid with mother-of-pearl catch the sun from the courtyard around which the home is built.

Looking at the world through the sunset in your eyes

A Berber blanket hangs above the living room sofa, a brazier (foreground left) doubles as a side table, and a banquet dish and stand serve as coffee table.

Trying to make the train through clear Moroccan skies

At the other end of the living room, a Kurdish kilim covers a table. The daybed and star-shaped side table are Syrian, while the rugs are Moroccan.

The dining room light fixture is an antique mosque lamp, an Uzbek suzani serves as tablecloth, and the chairs are camel-bone veneer.

Sweeping cobwebs from the edges of my mind

The richly inlaid furniture in this cozy corner of Bravo’s former studio is also Syrian. The Andalusian-style plaster frieze is custom-made. Most of Bravo’s art went to family members when he died, but the lithographs displayed here came with the house.

Had to get away to see what we could find

Hope the days that lie ahead

In Bravo’s former bedroom, the headboard is draped with a wool blanket and the bed with a Berber wedding blanket. The chest is antique Moroccan, and the Tuareg carpet is made of woven leather and palm fronds.

Bring us back to where they’ve led

The Green Bedroom is my favorite room in the house. The bedspread is Gujarati mirrorwork embroidery, the chest is 19th-century Moroccan, and the desk and chair are bone inlay.

Listen not to what’s been said to you

In another bedroom, embroidered pillows from Fez and Rabat gather on an antique Spanish bed. The chair is Indian, while the table and chest of drawers are Syrian.

Would you know we’re riding on the Marrakesh Express?

Would you know we’re riding on the Marrakesh Express?

All on board that train!

And yes, the house comes with its own hammam—in Valencian marble, no less.

I could do for a soak here, especially after that dusty train ride.

Or here. I’m not particular, but I am wondering about the view from these tubs.

I hear it’s spectacular, so let’s take a closer look.

Mandarin-orange trees underplanted with white roses grace the courtyard. Part of the “refresh” involved deepening the courtyard pool, which features a 19th-century Indian fountain, to allow for swimming. Street sounds drift over the courtyard walls, as do the Islamic calls to prayer.

Charming cobras in the square

Striped djellebas we can wear at home

This patio furniture is Indian marble, while the lantern is Moroccan. What else?

If you want more, which, you KNOW you do…