IN THIS POST:
What we truly love about Downton Abbey’s great hall may not be the awe-inspiring Jacobethan architecture, though we can’t help but notice that first, given that it screams at us from all sides. 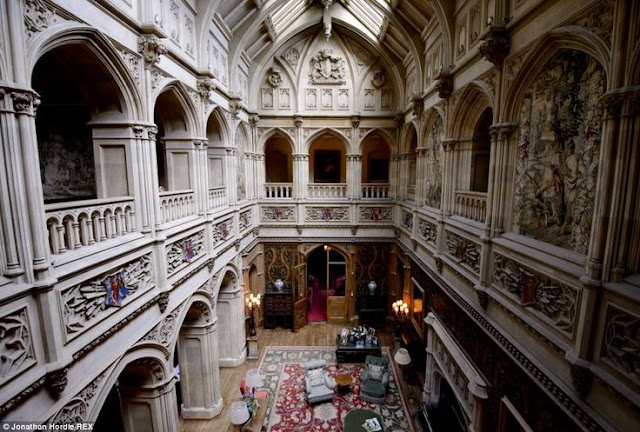 But looking beyond these august bones to the hall’s flesh, we find an arrangement of chairs at its heart, making an otherwise hollow space feel rather cozy and welcoming.

The great hall is similar in position and use to our present day great room—the hub of the home. But there’s no sofa anywhere to be found at Downton until you make your way into either the library or the drawing room. 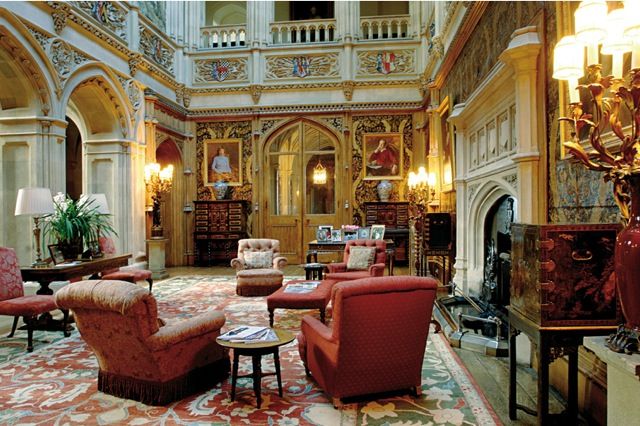 It’s chairs all the way, and it’s a look anyone can achieve in any room size, in any decorating style, at a variety of price points. Actual furniture pieces used in the Downton great hall switch out from season-to-season (a castle full of furniture gives you that option), but the overall feel remains the same.

Why even consider more chairs instead of a sofa?

The biggest reason is simple: Most people prefer to sit in a chair by themselves, laying claim to their own space. Have you ever noticed your chairs almost always fill up first? Even when entertaining another couple, who should have no qualms about sitting next to each other, they usually gravitate toward chairs.

Sofa space is generally the last to fill. And if one brave person does pass on an empty chair to claim a sofa corner, chances are no one else will sit there unless they have no other choice.

Other arguments in favor of chairs only:

While I wouldn’t suggest anyone go out immediately and trade in a sofa for chairs, it’s worth considering when it’s time to replace or reupholster the beast. Look at how you use the room first and consider what a new arrangement would do for you.

A group of chairs will probably cost as much as—if not more than—a single sofa. But you may already have chairs you can work into the mix and thus limit your initial expense. But any old chairs in any old arrangement won’t likely work. It requires planning. How many chairs are right for your space? Two? Three? Four? More?

Check out this digest of arrangement options to help you decide what will work in your space. 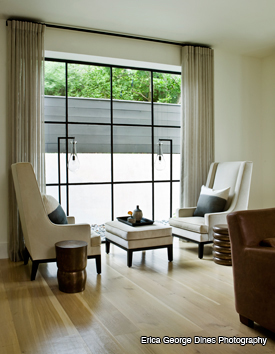 If you have room for only two chairs, position so they face each other, with a small table or ottoman in between. Accessorize with floor lamps and smaller side tables as space allows.

If you have room for four chairs, position each one facing another, but with the table centered in the conversation area, as in this photo. You may have room for narrow side tables between each of the two adjacent chairs. Floor lamps remain a good choice.

Symmetry works, and that’s a good rule to fall back on, but it’s not the only way to pull up your chairs.

‘C’ is not your average arrangement

The larger seat—in this example, the upholstered ottoman—serves as the backbone of the C and the smaller pair of chairs as its “arms.” The smaller pair should have seats more narrow and shallow than the larger piece, but seat height should be similar. A mix of leggy and skirted pieces provides contrast and interest. Usually it’s the pair that has legs exposed and the larger, backbone piece that sports heavy upholstery, but it works the other way around, too, as you see here.

You can either add a small, rectangular coffee table at the heart of the arrangement—no wider than the largest chair—or do as this homeowner did and place identical candlestand tables at the side of each facing chair. I love the styling of the ottoman as a seat on the side facing the conversation area and as display space on the opposing side. The artifacts are intriguing and so add substance as well as weight to this anchor piece.

The four-chair arrangement is by far the most common when replacing a sofa because, as I said before, symmetry works. This photo illustrates the “plus” version with identical chairs. Note that each chair is perpendicular to the one on either side. Place a square or round cocktail table in the center of such a grouping, no wider than an individual chair.

A pair of floor lamps is again the lighting of choice in this arrangement. When working with two pairs of matching chairs, place them across from each other, as above, or…

…each pair on opposite sides, as shown here. I find this room particularly interesting because of the difference in size between the two pairs. I think the similarity in upholstery makes it work, as well as the wood arms and brown pillows on the smaller chairs, which add to their visual weight.

If you go with something like this, make sure your centering ottoman or table is no larger than the SMALLEST chair. This one borders on too big but is diminished in size because it recedes into the matching shelf color.

Rules are made to be broken, and this grouping of four different chairs in an “X” shows how to break it so it still works. The arrangement coheres because the chairs are balanced in size and color. Two are beige and two are darker, and each chair is placed across from the one it most resembles.

The addition of side tables and other accessories helps make up for any differences in visual weight. This photo also illustrates that an “X” arrangement can handle a rectangular centering piece as long as it’s no wider than 1.25 times the width of the smallest chair.

I prefer the collected appearance of this arrangement to a matchy-matched look. How about you?

Here’s another variation on four different chairs—the same style but different in color. Each hue is a similar intensity, so it all balances. A drum pendant has been used in lieu of floor or table lamps—an excellent option that works like an exclamation point and adds to the visual impact of the space.

Circle the wagons—er, uh, I mean the chairs

This is a concept we’ve all seen used in shabby-chic designing, like the kitchen table and chairs above, but less frequently in living area settings. The principle is similar but the scale is larger.

Start with a round table or ottoman and divide up the space between the chairs. This example shows three identical chairs, though you can imagine it would work just as well if all were different but visually about the same weight.

This is a good arrangement if you like vintage furniture and your collection includes no two pieces alike. These seating pieces are a mix of styles but unified by slipcovers in the same fabric. The chaise in position by the window is a interesting touch and brings the total to that desired odd number. 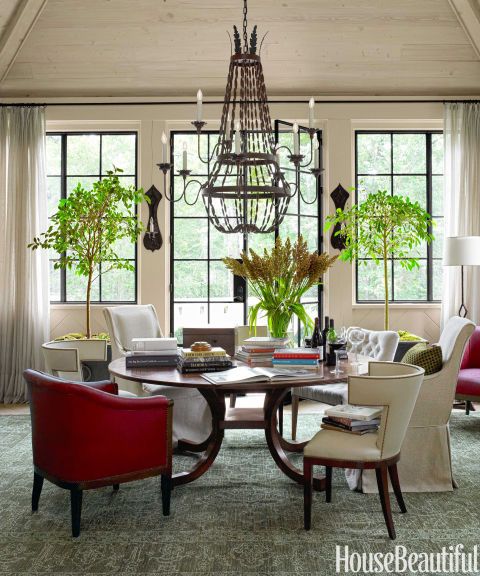 It’s okay to mix club chairs, wood-framed armchairs, armless slipper chairs and even dining-style chairs, as long as the scales are compatible, as in this photo. Seat heights and depths don’t have to be identical but should be close. The look is eclectic and classically casual.

Someone who can pull together a space like this knows her stuff. And now that includes you, too!