I don’t usually post on Wednesdays but wanted to honor the memory of a true bohemian and one of my favorite artists—Frida Kahlo—with a tour of her equally bohemian home, on the 109th anniversary of her birth.

Frida’s father, a photographer, built the house that would become “Casa Azul” a few years before her birth, in Coyoacan, a suburb of Mexico City. Its rooms surround an enclosed courtyard in the French style.

Frida was born here, lived most of her life here, and even died here. The house, however, wasn’t always blue. That came later, after she married the painter Diego Rivera and he paid the mortgage on it.

Today Casa Azul is a museum, and Frida’s collection of native plants, which often appeared in her paintings, is maintained by museum staff.

You can see through this open door to the young Frida’s bedroom, where she painted to pass the time while flat on her back, recovering from polio, as well as injuries in a later bus accident and subsequent surgeries.

Bedridden, Frida had a mirror installed over her bed so she could see herself to paint. “I picture myself because I spend so much time alone and because I am the subject I know best,” she wrote in her diary. In that practice, she foreshadowed painters of today (like Cindy Sherman, for instance).

You might even say she invented the “selfie,” though something tells me we’ll be looking at her paintings long after Instagram disappears.

Though only one-fourth Mexican Indian, as an adult Frida dressed in colorful peasant clothing and jewelry. Some of it is on display in the house, which Rivera turned into a museum after her death.

Rivera had an old garage on the property transformed into this studio for Frida. The walls are the same sort of volcanic material used in Central American pyramids, and the room is flooded with light as a greenhouse would be. 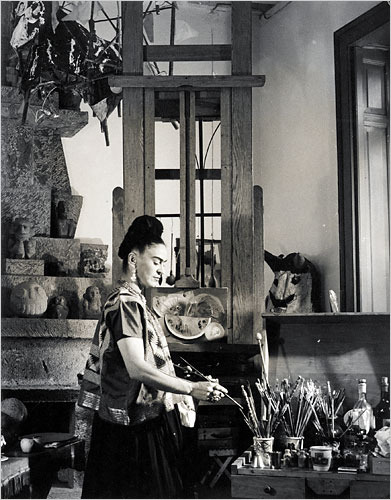 Here is a photo of Frida working in the studio, in full regalia, including one of the complex, twisted hairdos she became famous for.

The studio has been maintained exactly as the painter left it upon her death in 1954, down to the painting she was working on…

…and her paints, which she liked to keep in old perfume and nail polish bottles.

The bright blue and yellow kitchen of Casa Azul is especially beautiful—especially Frida, I think.

“Frida” and “Diego” are spelled out on the kitchen walls with embedded shells in a way that belies the turmoil of their real-life union.

Exterior gardens were expanded in 1937 for more privacy and better security when Leon Trotsky lived in exile with Frida and Diego.

Rivera had numerous items—shells, artifacts, pottery—embedded in outside walls during renovations and expansions.

Though not a self-portrait in the traditional sense, I find What the Water Gave Me one of her most enigmatic paintings.

Kahlo was an original, to say the least, whether because of her dysfunctional upbringing, the pain she lived in, or pure madness, and even her funeral was wracked with macabre theatrics. It’s said that as mourners watched her jewel-bedecked, elaborately coiffed body roll into the crematory, the sudden blast of heat from the open incinerator doors blew her bolt upright and ignited her hair like an infernal halo. One observer even recalled that, deformed by the flickering shadows, her lips seemed to break into a grin as the doors snapped shut.