An anthropologist I heard speak at a communications conference circa 1990 predicted that the emerging paradigm for the future was to marry a geek. And not just us boho gals–everyone should marry a geek.

You heard right—a geek, a nerd, a techie. Her logic went like this: Prehistoric civilizations evolved with a predilection for taller males because a taller person could see farther, had longer legs, and thus was more likely to find food—or “catch the woolly mammoth,” as she said amid audience giggles.

Though height no longer has any connection to food procurement, our culture still favors taller males in subconscious ways. Better criteria for a mate, given the world we live in, she said, is someone who’s technologically savvy, whether male or female, short or tall.

I saw a good bit of logic in this recommendation then because I’d recently married someone with a degree in computer technology. We met over a PC—he as trainer, me as trainee. But we bonded because he took time to understand my work and how particular aspects of technology might help me. You see, just BEING a techie isn’t enough. You need someone who puts himself in another’s shoes and connects them to technology tools that help them work and live.

Today is the inaugural National Technology Day, and I want to use the opportunity to share just a few of the “woolly mammoth” ideas my resident nerd—my much-loved and valued husband, Chris—has come up with through the years to help us live simpler, cleaner, cheaper, saner lives. All are products you can buy off the shelf in your local home store or through the Internet and install yourself.

Separate bidet units in bathrooms never really took off in the United States until manufacturers started combining them with toilet units. According to Houzz, 5 percent of renovated master bathrooms now include bidets. The even better news is ANY toilet can be upgraded with a bidet toilet seat/lid without major renovation or plumbing changes.

My tech guru came up with the idea for a bidet seat conversion because I needed reconstructive foot surgery that would restrict my mobility for several months. In spite of great pain, the major reason I put off the surgery was the impact I knew it would have on my spouse. But while I worried over admitting my REAL fears to the man I loved, he anticipated them and was at work on a solution.

We ordered a Brondell Swash 1000 bidet seat over the Internet and installed it a few months before my surgery. It taps into the existing water line, so we didn’t need a plumber. We did, however, hire an electrician to install an outlet behind our toilet for less than $100.

Chris did the rest, and all I can say is, I have never felt or been so clean. Don’t wait for major surgery to try it. If you have colon issues like irritable bowel or diverticulosis (me), know that this one technological advancement will change your life.

Our seat was top of the line at $600, but Brondell makes models that start at under $200, as do other manufacturers. It’s kind of odd this photo shows a stash of toilet paper next to the bidet/toilet because the truth is you won’t EVER need toilet paper again. If you’ve been using the pricey (softer, lotion) stuff plus personal wipes plus steroidal creams, you’re going to save money over time that will more than offset the cost.

Tired of drop-in tablets that eat away at your toilet tank parts but equally dismayed by persistent stains?

The Flush ‘n Sparkle Bleach Kit by Fluidmaster installs in the tank without harming tank components and automatically cleans your toilet bowl with every flush. Cartridges last about three months. During that time you’ll still need to clean around the rim with a brush and/or sponge, but the bowl takes care of itself.

The initial kit costs around $10, and replacement filters sell for about the same for a two-pack—easily offset with special cleaners you’ll no longer need to buy.

We live in a condo built in the late 1980s that we continue to renovate and update. One of the first improvements we made after moving here nearly four years ago was to add attic insulation. Several months after that $2,000 investment, both our wired smoke alarm and doorbell stopped working. We risked damaging the insulation if we tried repairing in the usual way. The wireless solutions Chris came up with were both easy to install, less obtrusive, and easy to access for battery replacement or future repair. 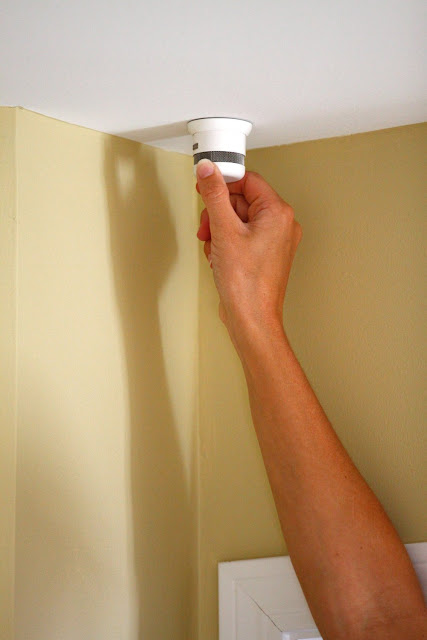 The alarm uses a long-life 3V Duracell lithium battery (included) to ensure continuous power for over one year without replacement and features an 85dB audible alarm with flashing LED and a convenient dual function test/silence button to control that function. The alarm mounting bracket easily attaches to wall or ceiling, and the alarm twists to lock in place.
Because it’s so small, this smoke alarm disappears in plain sight so it can be more accurately positioned to detect smoke before the escape route becomes blocked. Alarms sell singly for under $30 (or about $80 for a three-pack) and come with a 10-year warranty. 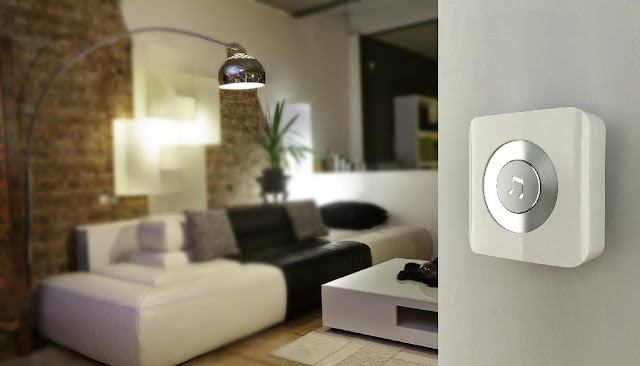 Our system requires batteries in the unobtrusive base unit and outside chime buttons and mounts easily within a 150-foot range. Some base units plug into electrical outlets, and most come with at least two chime selections so you can tell which doorbell is ringing.

For instance, we have two chimes at our front door and one at our garage entrance. Our system came with even more choices, including Christmas carols and birthday songs we can switch on and off with ease. Prices range from around $15 to $60 and vary based on casing as well as the number of door buttons.

Smartphones that earn their keep 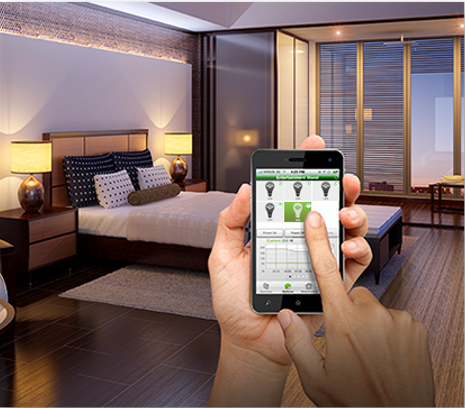 We found a TCP automated home lighting system on sale for about $50 at our local home store, though other brands are available and prices vary. Ours included two LED bulbs with embedded transmitters and a control box that plugged into our home network. We programmed a light in our living room and our bedroom to come on automatically at dusk, then we turn both off from our smartphones at bedtime.

Most systems are expandable to add more lights and a separate remote, as well as allow you to dim lights and control them from wherever you happen to be. For us, this means we don’t have to get back out of bed if we forget to turn the lights off (yes, we’re that lazy), nor do we need additional nightlights to prevent falls. If we have to get up in the middle of the night we use our smartphones to turn on the light in the living room and illuminate the way.

6. App that turns off  annoying TVs 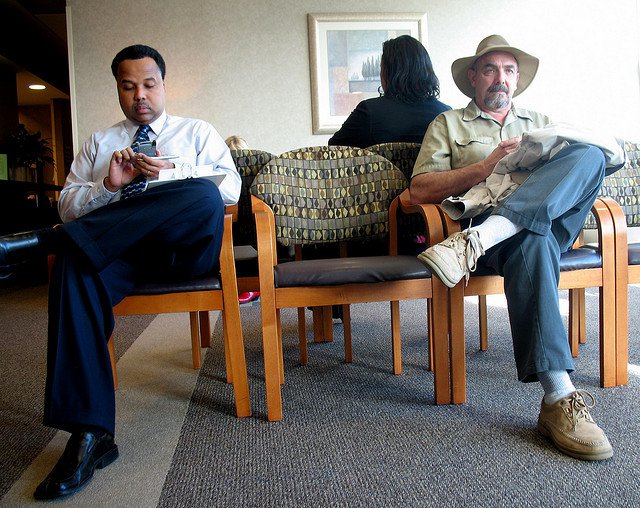 There are times I enjoy watching television while waiting in a public place, while other times it drives me nuts. It depends on what’s on, how loud the set is, and how much other noise and activity is going on around me. Oh yeah, it also depends on my mood, which isn’t always that great when I’m waiting (and waiting some more) for a medical procedure.

Now, for as little as a buck, you can download the TVBGone app and turn off any TV anywhere anonymously. You’ll just look like you’re reading text messages or playing a game on your phone. No one will be the wiser. They’ll think the office staff did it for a reason and probably won’t even complain or question.

TVBGone is available for Android and iphone and requires a smartphone with an infrared blaster. There are also similar apps sold by other manufacturers, as well as keychains that will do the same thing in lieu of a smartphone. Some newer phones may include such apps already loaded on the operating system.

This hack works with regular light bulbs in case you don’t want to invest in the special TCP transmitter LEDs everywhere. You’ll find such systems from a variety of manufacturers at any home store or website. 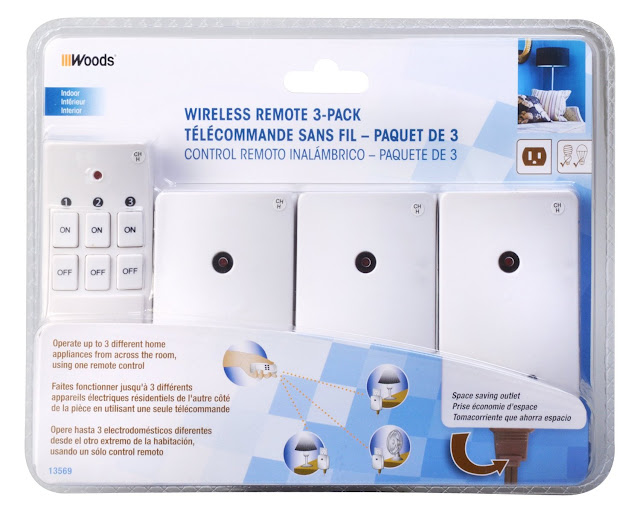 The system we purchased is made by Woods and similar to the one pictured. It was originally marketed to turn Christmas tree lights on and off easily, and we found it on after-Christmas clearance for less than $15. We use one unit at Christmas for tree lights, but the other two the rest of the year work the two desk lights in my office. The lamp cord plugs into the unit, and the unit plugs into an outlet. The one remote controls all three lights.

Sometimes I work at my desk and sometimes from a comfy chair with a laptop table. Either way, I’ve learned to keep my remote with me to get the light I need when and where I need it. My only problem is hiding it from Maisie, our cat, who thinks it’s one of those things that should ALWAYS be knocked onto the floor.

To go where no one has gone before…

Yes, Chris also steers me to the right computer hardware and software to help me work smarter. He keeps my system and our network running smoothly and often surprises me with techy gifts he’s vetted, which he figures out how to use then teaches to me.

I’ve often wondered what people not married to a geek do. Pay for a lesser geek from some big box electronics store, I suppose. Would you believe that being married to Chris carries still another advantage? He’s also a terrific cook and plans and makes ALL our meals, so at an even six-feet-tall he still chases down the modern-day equivalent of our woolly mammoth.