What about Downton Abbey’s kitchen would you most like to duplicate at home? The rack of copper pots? The sturdy work table filled with farm-fresh ingredients? The wall of sieves and molds? The shelves lined with crockery? Maybe the cook herself, plus her staff of maids and servers? 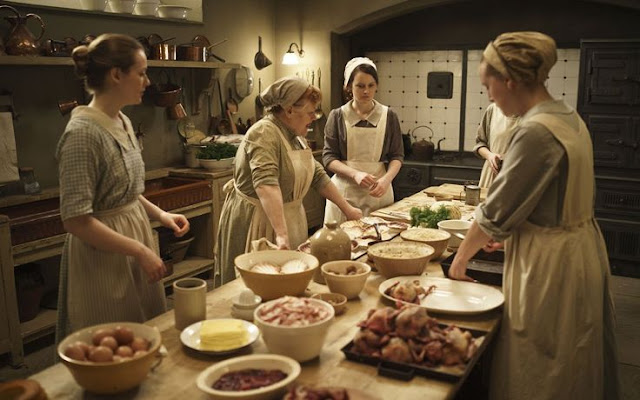 What I REALLY like most about the Downton kitchen is the humor Mrs. Patmore brings to her job. She’s the “downstairs dowager” of sarcasm, though we seldom see her rest and sip tea like her upstairs alter ego. She has no time to stop for humor, but it always finds its way to her, then routes itself back out her mouth, quite unconsciously. 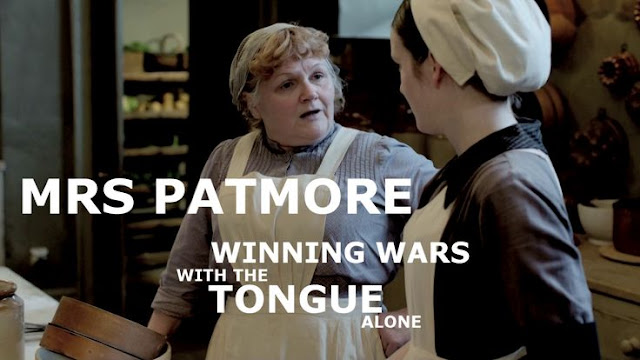 In fact, Beryl Patmore has had some great one-liners in the show’s five-year history. To ramp up for Downton Abbey’s sixth and final season, I thought it would be fun to pair up some of Mrs. Patmore’s sayings with appropriate kitchens and/or kitchen accessories.

“Anyone who has use of their limbs can make a salmon mousse.” 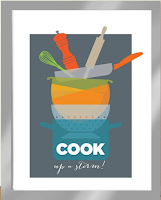 Check out the October issue of House Beautiful to tour the magazine’s 2015 kitchen of the year and see the downstairs renovation it spawned for a lucky New Orleans family. Considering it’s NOLA, the island is crawfish pink, but Mrs. Patmore might call it “salmon mousse.” I might even be inspired to try making a salmon mousse if I had this kitchen!

The cloud art in the dining nook establishes a theme that appears throughout the house in various formats. To go along with the clouds, my accessory of choice would be the framed “Cook up a Storm” print, available from Visual Philosophy on Etsy.

“I said you could go for a drink of water, not a trip up the Nile.”

Designer and HGTV host Emily Henderson put the pizzazz in Country Living’s 2013 home of the year—a Breezy Point, N. Y., beach house battered by Hurricane Sandy. The backsplash only looks like shiplap; it’s faux bois tile that will weather most any storm a kitchen could cook up.

The rope light arranged over the beams, from Atelier 688, is a fixture Mrs. Patmore would go for—as a tool of threat anyway. 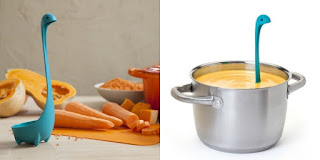 Sandy soaked this bungalow in three feet of water—no laughing matter. But in hindsight, these Loch Ness ladles might offer just the bit of levity needed to clean up. You never know what a storm might bring in, AND they’re great for bailing.

“If you must pay money, better to a doctor than to an undertaker.”

New York designer Ken Kelly threw in a bit of kitsch with all the modern bells and whistles in this renovation. The range backsplash features a “bubbles” tile, which butts up against horizontally installed glass sticks on either side—sticks and stones? Well, no bones broken that I know of.

I love how he repeated the bubbles in the brightly painted wicker balls filling the bowl on the table. But the cookie jar is the accessory to die for. Designed by Erika Oller, it’s titled “Happily Dying of Chocolate,” an end few of us would pay the doctor to delay.

“Oh, heavens, girl! You’re building a fire, not inventing it.”

A built-in pizza oven (or a busy restaurant kitchen) is about as close as modern day gets to the heat Mrs. Patmore and crew endured during their 18-hour Downton days. To say that the kitchen was hot was an understatement, which makes this print the perfect accessory. It’s available in 20-plus colors at Etsy shop noodlehug.

“Take those kidneys up to the server before I knock you down and serve your brains as fritters.”

I’ve no kitchen to match up to this Beryl-ism, but I did find a plethora of threateningly tongue-in-cheek accessories I know she would enjoy. Follow the links to find each product:

“Judas was only trying to help, I suppose, when he brought the Roman soldiers to the Garden.” 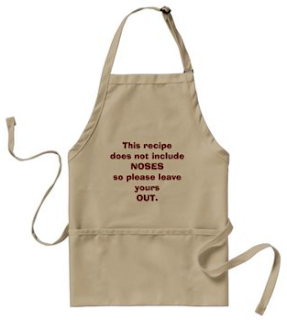 Designers Johnny Grey and Leila Ferraby of Johnny Grey Studios created this “indoor-outdoor” kitchen for the 2011 Chelsea Flower Show. It’s more Gethsemane than meddlesome, what with  the atrium-like overhead view, as well as out to the garden when standing behind the island. Materials used to withstand outdoors temperatures and moisture levels include stainless steel, granite, solid maple, coconut palm and ceramic tile. Follow the link to see/read more.

If this were MY kitchen, I know I wouldn’t want Judas or the meddlers that hang about Downton downstairs bothering me. Donning this apron, available here, says all that needs said.

“Nothing’s as changeable as a young man’s heart. Take hope and a warning from that.” 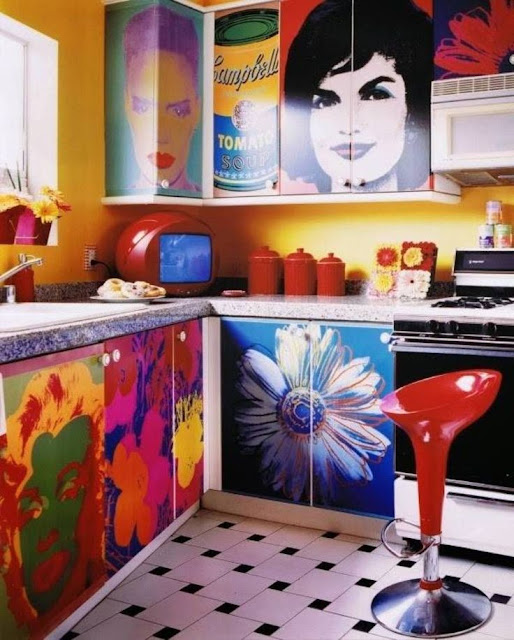 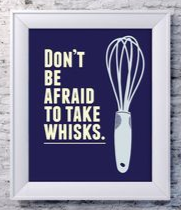 Obviously, some young man of indecisive heart put this Andy Warhol-themed kitchen together. Watch out, Daisy, there be more of them about!
The unspoken part of Mrs. Pat’s advice found its way into this print, which would look smashing (or should I say, “whisking!”) hung in this kitchen. Ask about it at Knotty Cards on Etsy.

“The trouble with you lot? You are all in love with the wrong people.”

Is this kitchen the color of love or what? Enough unrequitted love surely sulks around the Downton kitchen to turn the cabinets this rosy hue. Seriously though, it works, especially with the crystal chandelier and black accents, which give it a Belle-Epoque-Paris flair. See more pink kitchens at Fresh Home Design & Architecture magazine.

And pick up these cute little kitchen helpers—the “right people” for the job—at Amazon. Head Chef manufactures them as professional-grade kitchen utensils for children. But don’t let the kids have ALL the fun. 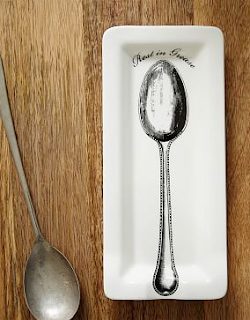 But no parsnip ever met its end in a kitchen as buttery as this one. It’s easy on the eye if not on the hips, yet infuses more personality than white or cream. It reminds me of the wall color at my previous house, called “candleglow,” which looked great with everything. These cabinets really pop against walls a few shades darker.

But since there is such a thing as too much butter (rare!), so keep something on hand to collect the drips. I have this same Fishs Eddy spoon rest on duty beside my cooktop. Find yours at West Elm.

“There will be a glorious revolution down here if you don’t watch it.” 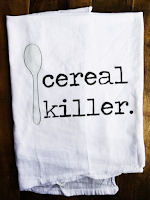 When talking “glorious revolution,” what better kitchen to feature than the one that fed George Washington and family at Mount Vernon? Interesting, isn’t it, that the Downton kitchen looks more like this one, circa 1776, than like those we cook in today.

And since this Berylism was almost certainly meant as a threat to the younger staff to get busy, a slap with this tea towel might send them on their way.

“Oh dear, have you swallowed a dictionary?”

No kitchen to go along with this one either, unless you choose to add to yours. These cute prints on old dictionary pages are available in so many images from so many sources it will make your head spin. Search “dictionary prints” on Etsy and start your wade through the deluge. I used some of the anthropomorphic animal dictionary prints to decorate my guest bath because I heard it’s good to be able to chuckle when you’re standing in front of a big mirror with no clothes. It helps.

“Sometimes you spend too long on a one-sided love.” 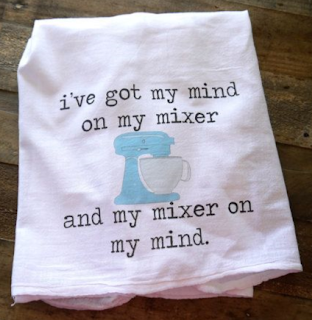 We’ve all seen Granny Crawley (whose first name is Violet, remember) in her many purple outfits. Word has it that Mrs. Patmore admires the color but lacks the courage to use it on her work table. You only live once, Mrs. P–go for it or move on!
Perhaps she’s afraid such a color would distract the less focused members of her staff. This towel, in such circumstances, would be an appropriate gift for her to give lackadaisical Daisy. Find it at Finch and Fox on Etsy.
See more purple kitchens here. 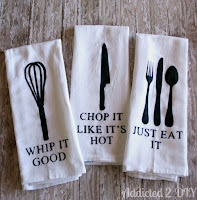 No, certainly not! But that island? Well, gotta say yes. Even the design shouts “wing ding!” So it makes sense to snag some catchy phrases for your kitchen towels to keep the fun going. These are available at A2D Creations on Etsy.

“Oh, get off with you, you cheeky devil.” 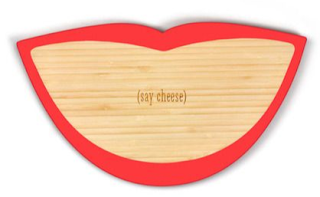 “Cheeky” is an understatement for this madcap mosaic island of Legos. The all-white kitchen makes the work of art pop, and the red stools and “atomic” wall rack add just the right touch of counterpoint, even if it all is way too modern for Mrs. Patmore.

The “Cheesy Grin” cheese board would feel right at home here, though, bearing the knife in hopes of a taste of that estate-made stilton. The board is currently on sale at Dot & Bo.

“Nothing makes you hungrier or more tired than grief. When my sister died, God rest her soul, I ate my way through four plates of sandwiches at one sitting and slept round the clock.”

If she means macaron sandwiches, then I could probably do four as well, grieving or no. This kitchen made me think of mint green (or pistachio?) macarons—see the resemblance?—and I thought that was reason enough to include it here.

All of which got me to thinking…We know Mrs. Patmore grew extra grumpy when she was losing her eyesight. But maybe her witticisms were made on an empty stomach—something like the cobbler’s kids who go without shoes? Anyway, this print should promote understanding in the workplace.

This final witticism has multiple parts…

Mrs. Patmore, regarding the cottage she wants to invest in:
“What’s the kitchen like?”

Mrs. Hughes:
“Oh, not quite the scale you’re used to.” 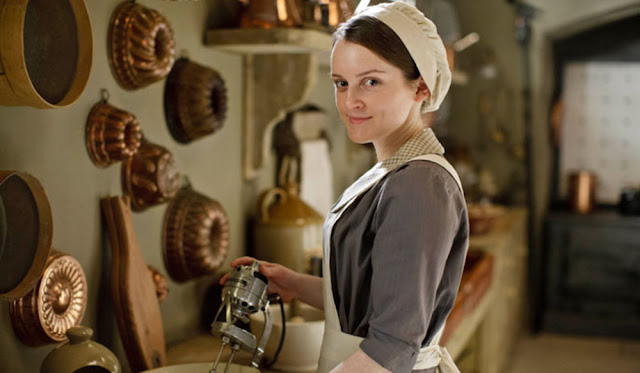 That, of course, refers to Downton, to which Mrs. Patmore replies:
“Well, I wouldn’t mind—it’d be my own.”
To which actress Lesley Nicol (the Mrs. behind Mrs. P.) replies:
“When I am in that kitchen set I am completely at home,
and it feels marvelous. I just feel like her.
But in reality, I’m a truly rotten cook.”

The illusion was nice while it lasted. Oh well, just don’t tell Carson.

The Abbey like you’ve never seen it before:
Bumped-up BoHo, every Wednesday